FURUNO is world renowned for their exceptional Radar technology, as illustrated by recently winning the NMEA's Best Radar Award for the 40th year in a row.

The DRS4D-NXT is a Solid-State Radar with pulse compression and Doppler frequency shift sensing technology, built into a compact 24" Radome. This "NXT" (read "next") generation Radar is designed for use with both NavNet TZtouch and TZtouch2 MFDs. The DRS4D-NXT is packed with new features, but perhaps the most innovative and revolutionary is called Target Analyzer™, facilitated by FURUNO's Doppler technology. The Doppler Target Analyzer™ will automatically change the color of targets approaching your boat to clearly show any hazards for collision hazards. Green echoes are stationary targets, land, moving targets but targets moving away from you or approaching targets moving at a velocity of less than 3 knots. Echoes dynamically turn red when targets are approaching your vessel at a speed of 3 knots or faster. It works the same when you are following another vessel. If the target is getting closer at a speed of 3 knots or more, the echo will be depicted in red on the screen. Incredibly, Target Analyzer™ works independently of one's own ship speed!

Tracking and interpreting threats is now easier than ever with the Fast Target Tracking™ feature of the DRS4D-NXT Radar. Almost instantly, you will see other target vessel's speed and course vector. If the target is hazardous, it will also be displayed in red, making it easier to identify and predict its course. The NXT Radar's incredible ARPA signal processor will automatically acquire and track up to 40 targets in a single sweep, without the need to set any kind of acquisition zone! Up to 100 ARPA targets can be displayed and tracked simultaneously.

The resolution of this dome Radar is impressive on its own, with a 3.9-degree horizontal beam width, but performance has been increased further by incorporating FURUNO's exclusive RezBoost™ beam sharpening technology. With RezBoost™ set to maximum, the NXT Radome's beamwidth is sharpened to the equivalent of 2 degrees, providing enhanced target separation that was previously only available on larger, open array Radar antennas.

An all-new "Bird Mode" is yet another unparalleled feature of the DRS4D-NXT. With a single selection on the MFD, the Radar automatically adjusts settings for echo enhancement to help you locate birds. For those fishing fanatics, finding the birds is an important step to zeroing-in on the bite.

Whether you're looking to add Radar to an existing NavNet TZtouch or TZtouch2 system, or ready to build a whole new suite, FURUNO's DRS4D-NXT Solid-State Doppler Radar is a must-have for the ultimate in safety and situational awareness. 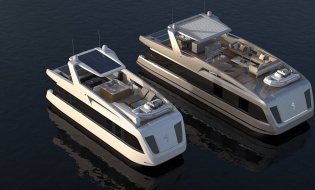 The new concept called OVERBLUE. Project Overblue sets a new standard of life on the water. 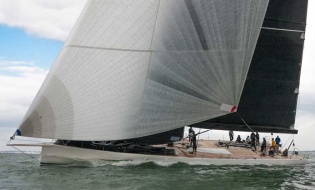 Launching of Galateia, the second generation of wallycento

Monaco – Galateia, the third unit of the ground-breaking wallycento design, was successfully launched in...