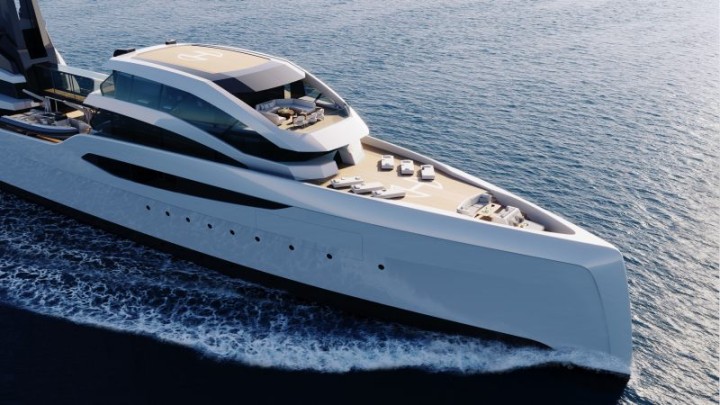 In a radical departure from the norm, the owner and guest quarters are completely separate, hence the distinctive ‘split’ superstructure with the owner’s private space in the forward section and the guest area aft.

The two deckhouses are served by separate staircases and elevators but they are also connected, of course; in this case by a floating Glass Bridge and the Ocean Lounge, effectively an expansive beach club on the lower deck amidships with folding platforms on both sides, an indoor swimming pool and a large skylight in the deckhead above.

“The whole concept is based on the premise that the owners have their own residence and there is a separate guest house for friends and visitors,” says Peder Eidsgaard, co-founder of Harrison Eidsgaard. “The idea is that the owners can spend weeks on board in full privacy, but also interact with their guests in the Ocean Lounge in the middle of the boat.” 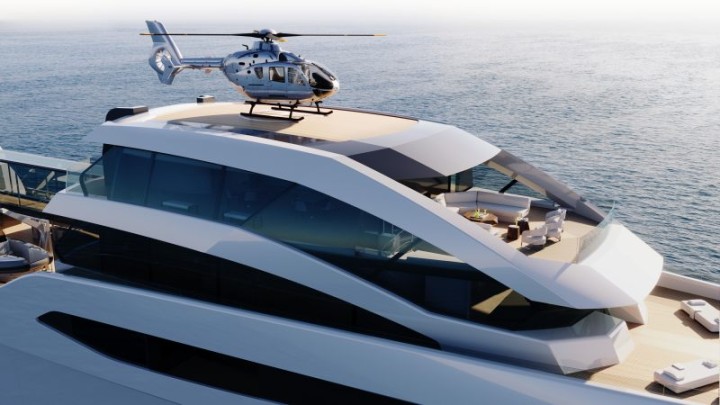 Heart of glass
Anyone standing by the flagpole in the stern of the yacht can see through the Glass Bridge, between the Bridge’s split helm console and all the way to the bow. The hydraulic side platforms in the Ocean Lounge are not at water level but slightly higher, which means they can be deployed in quite rough conditions without wave slapping or risk of flooding. Sliding glass doors also mean the flush deck platforms can remain open at night or in cooler climes.

As befits any explorer yacht, the large tenders are stowed on the open deck above the Ocean Lounge under the Glass Bridge. In fact, there is space for two 13.5-metre tenders with no height restrictions. More tenders and toys can be carried in a side-opening garage under the foredeck. 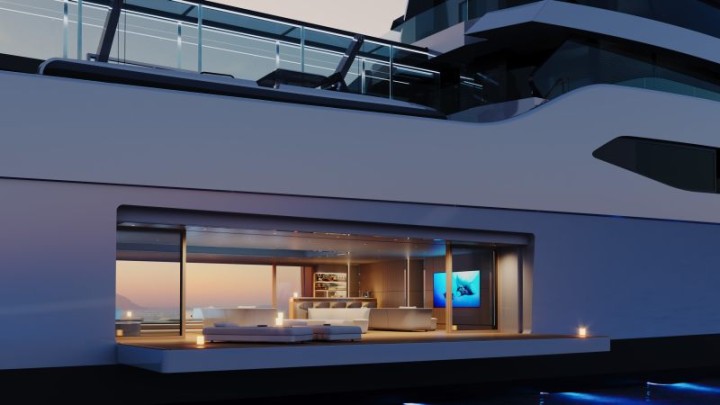 “We’ve collaborated with Harrison Eidsgaard on various projects and they always throw a few challenges into the mix,” says Jan-Bart Verkuyl, Feadship director and CEO Royal Van Lent shipyard. “The Glass Bridge was one such challenge and we worked closely with the De Voogt engineers to see how we could make that work. Suspended in mid-air, it’s a completely new idea and quite a feat of engineering.” 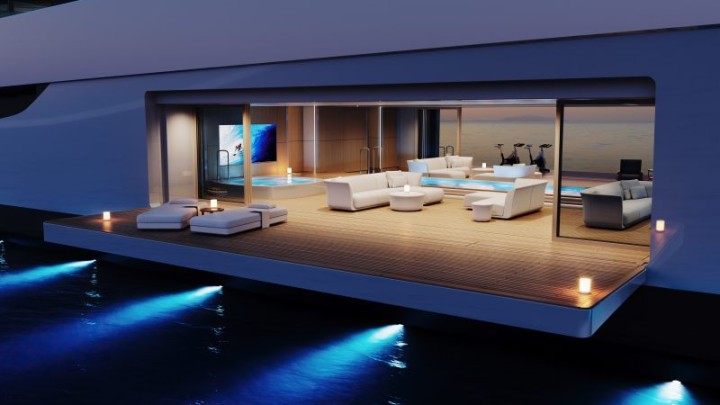 Arrival by air
Right at the bow on bridge deck level is a cosy nook that can be used for both sunbathing and dining. The Owner’s Office is located behind the wheelhouse, with a full-beam and very private Master Suite on the deck below. At the very top is the owner’s observation lounge with full-height windows and a private terrace overlooking the foredeck. The heli-deck above the observation lounge is fully certified and has direct access to the owner’s apartment.

“The clients like to use their helicopter almost as a tender for commuting to and from the yacht on day trips,” says Verkuyl. “It hugely extends the area they can visit and is used frequently, but because it’s on the forward deckhouse there is minimal disturbance for the guest activities in the stern.” 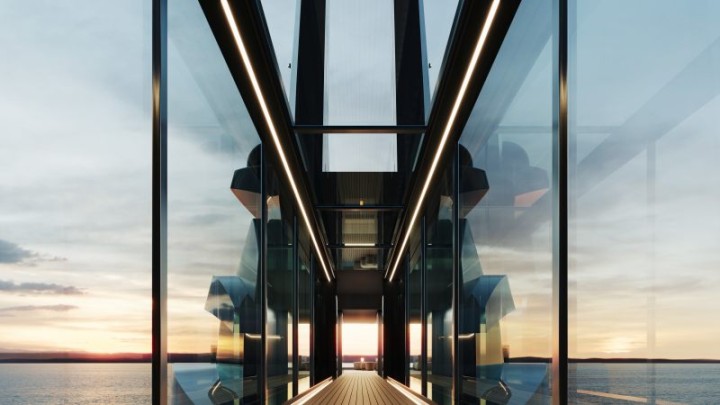 Alternatively, when arriving by tender at the transom platform, a corridor leads all the way to the Ocean Lounge, so the first glimpse guests have of the interior when they come aboard is an arresting view of the swimming pool.

Inspiration for the guest accommodation came from a feature of cruise ships whereby the most desirable staterooms are always facing outboard and also aft. In a completely new solution on a superyacht, there are six guest suites arranged around the stern on two deck levels and all have beds facing out to sea with private terraces. The staterooms can also be combined into very specious VIP suites depending on the number of guests on board. 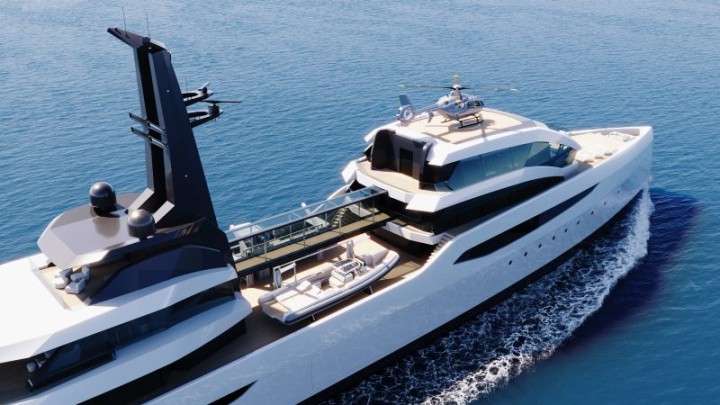 The unusual superstructure arrangement means that the guest deckhouse is effectively a self-contained unit with easy access to the transom platform for swimming, accommodation on the main and upper decks, and its own dedicated lounge and bar linked to the owner’s area by the Glass Bridge.

Another spectacular feature is the substantial mast atop the aft deckhouse. Integrated into the structure is a crow’s nest, a two-person pod that can travel past the radar domes to the masthead high above the deck. 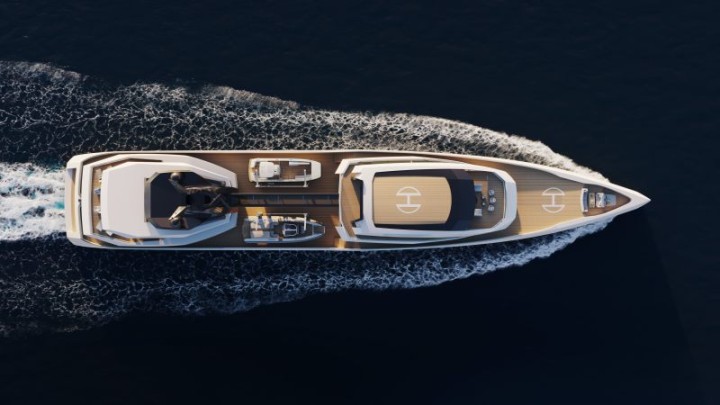 Starting afresh
“When we started this project, we took all the features you find on superyachts and threw them up in the air,” explains Eidsgaard. “The pieces landed where you might not expect to find them, but where they might make more sense. The two deckhouses are unique and no other superyacht has them, but the profile with its reverse bow, bold use of glass and dynamic curves is very purposeful.”

Apart from the Glass Bridge, the groundbreaking concept placed other engineering demands on Feadship’s technical team. Having the tender deck amidships with the open-plan Ocean Lounge immediately below, where the engine room would normally be, required careful analysis to ensure structural strength. It also meant a single-level engine room. However, diesel-electric propulsion is ideally suited to this kind of arrangement. Generators and pods also mean less noise and vibration, and the possibility of integrating renewable fuels in the future. 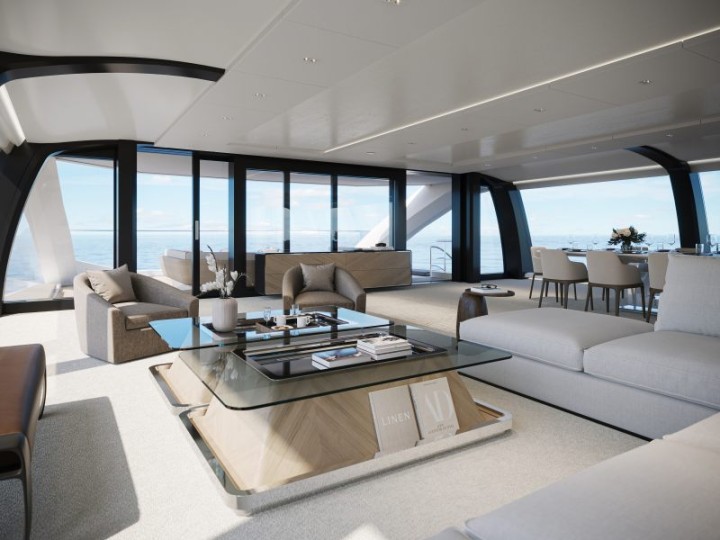 “This is a yacht designed for experienced owners who like to spend long periods on board with guests who might join them for a week, a month or even more, so privacy was an essential consideration,” says Eidsgaard. “In that context, it might seem like an extreme design because it looks very different, but if you examine the individual elements, they all make perfect sense.” 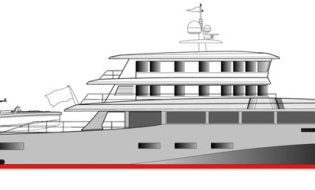 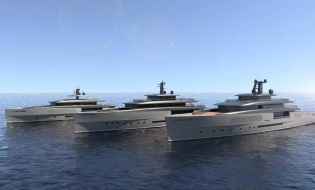 The partnership continues between the Rome-based firm and the Perini shipyard, a universal icon of...