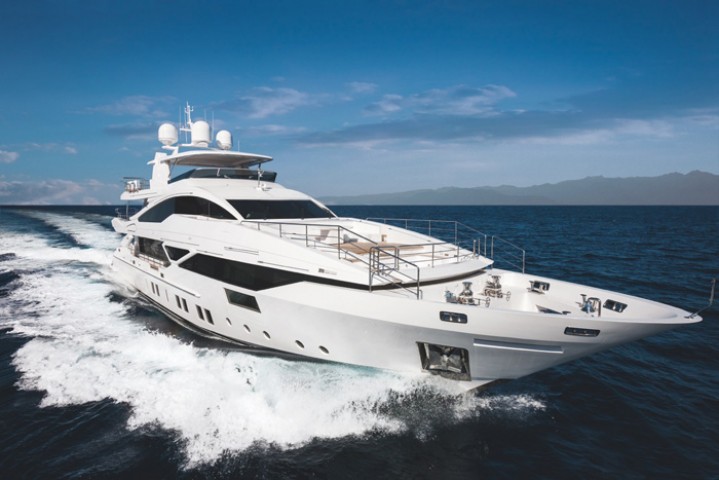 Veloce 140’, the new jewel in the crown of the Benetti Class Fast Displacement range, is a yacht with a great personality, deriving both from the technological innovations of the hull and propulsion systems, and from the distinctive design and furnishings.

The most distinguishing feature is the new D2P hull designed by Pierluigi Ausonio Naval Architecture Studio and the Azimut|Benetti Research and Development Center.

The most obvious advantages consist of the energy-saving, 12-knot cruising speed and the ability to travel at high speeds (over 20 knots) in total comfort.

Veloce 140’ - a semi-custom yacht with a D2P (Displacement to Planing) hull - is an innovative project that excites both Benetti enthusiasts, eager for greater speed, and those who are approaching the Tuscan shipbuilder for the first time, in the knowledge of being able to rely on high-performing yachts with comfortable displacement speeds. For more technical information, please view the attached press releases on the Fast Displacement line.

The hull, first built for a yacht owner and a trusty Azimut|Benetti customer, is characterized by highly customized interiors, starting with the layout, which may be designed according to the customers' requirements. The Exterior Styling & Concept was developed by Stefano Righini, while the interior design is the work of the British RWD-Redman Whiteley Dixon, in collaboration with the owner's designer.

The interior and exterior decor was entrusted to the international architect Joao Armentano. The woods used mainly include light gray TAY and slate gray TABU for the flooring. The decorative elements are in a silver lacquer finish and the ceilings in alcantara and a white lacquer finish. All stainless steel features come with a satin finish. The interior furnishings are by Minotti, the lamps by Flos and the taps and fittings by Gessi. As regards the technological heart of 140’, it is worth noting the use of the largest engine ever mounted at the Viareggio Benetti shipyard: two MTU 12V 4000 M93L 3500 mhp engines. It is also equipped with a system of CMC Marine electrical fin stabilizers.

The large Sun Deck covers more than 77 square meters on the highest "bridge" of the new Benetti yacht. Here, too, class and functionality blend seamlessly. This large terrace overlooking the sea is dominated by a central pool facing the most spectacular living area of the yacht: an extended section on the right, served by a long linear bar on the left.

Another feature of this bridge are the seats in the bow, with a frontal sea view. 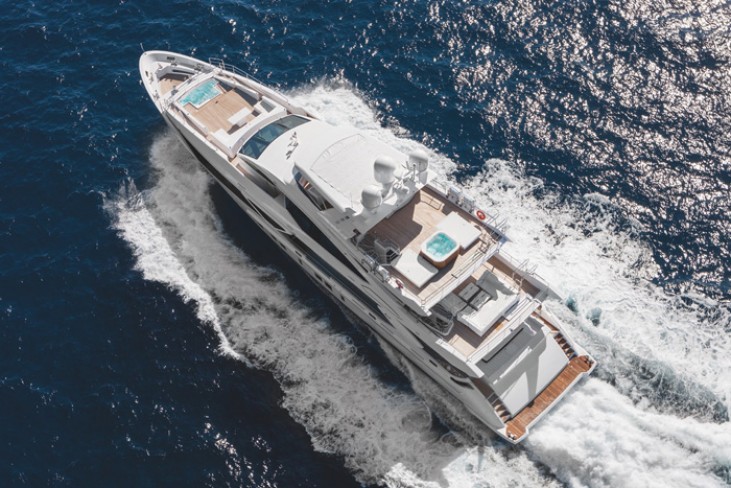 This bridge is marked by modularity, as it was not designed with the traditional "fixed" furniture. Everything can be removed or moved with ease, to obtain a large circular area that extends outdoors and indoors. Astern, there is a large dining table seating sixteen. Here there is also a relaxation area, leading to an internal sky-lounge through electric concertina doors. This provides is a large open plan area that is partly air-conditioned.

At the bow stands the yacht's second spectacular - and especially deep - pool, with a comfortable and safe ladder to ease yourself into the water and relax in the whirlpool. Opposite, there are two large sunbeds and a living area with a sofa and coffee table, offering total privacy. On this bridge, at the express request of the owner, the area originally designed as the captain's cabin has been converted into an additional luxury bedroom.

This bridge is dominated by a large gym, designed at the owner's behest. Placed in the bow, it has a wide-body structure, thus optimally exploiting the entire hull width. One of its main features is a side terrace with stunning views of the sea, providing the entire area with natural light and ventilation.

The equipment, from the Technogym Personal line, is of the highest level, and there is also a massage area. Further astern, there is a large dining area seating twelve and a huge living area that extends outdoors, once again creating a seamless indoor-outdoor environment. The cockpit comes with a day bed that quickly converts into a relaxation area.

The lower deck leads to the sleeping area. This consists of five cabins, one for the yacht owner, two doubles and two for guests, with twin and pullman beds. The four crew cabins, for the eight crewmembers, are at the far end of the bow. The lower deck also features a wonderful and extensive "beach club" area, accessed by a double flight of steps and equipped with a central bar counter running the length of the bulkhead.

The garage is placed transversely to the beam, and can accommodate up to two tenders. 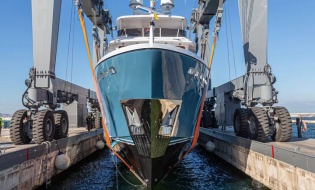 Uptight has been designed to fulfill her Owner's desire to have a reliable and comfortable... 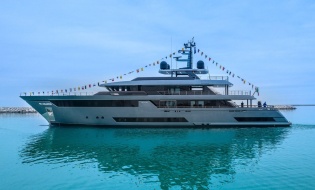 Bringing more beauty to the sea and the world, the magnificent new Riva 50 M/Y...