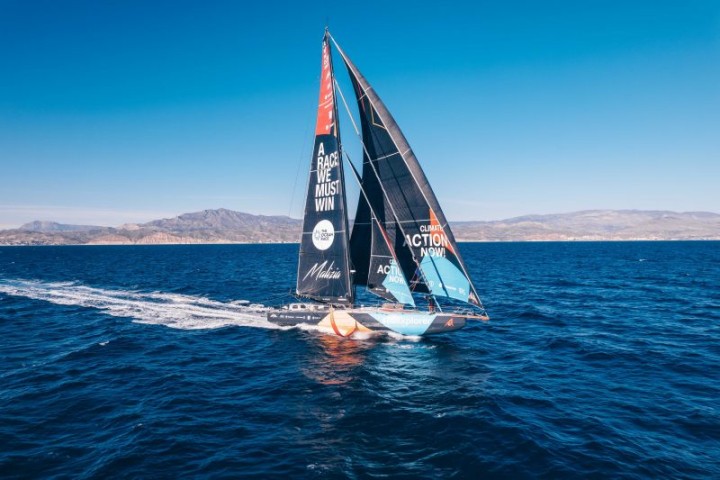 At 04:10pm precisely on Sunday 15th January the gun fired for the start of The Ocean Race from Alicante, Spain, for the 5 IMOCA boats and 6 Volvo 65s including the 5 team members sailing on Malizia- Seaexplorer helmed by Boris Herrmann from Yacht Club de Monaco.

The former Whitbread Round The World Race continues to thrill 50 years after it first launched. For the second time in its history, YCM is on the start of this crewed round the world in stages offshore race after Grant Dalton’s 2nd place in 1997-1998 on WOR 60 Merit Cup (MON 700).

IMOCAs join the fleet
Launched 1973 and held every three years since 1988, it is the first time the high tech, foiling, nearly flying IMOCA boats will be competing. For six months the five IMOCAs will be sailing around the world competing to be named winner of this iconic ocean race. For YCM’s Boris Herrmann it’s his first crack at this iconic race in his career. Aboard Malizia-Seaexplorer it will be a unique experience for the sailor and his crew comprising Will Harris (co-skipper), Rosalin Kuiper, Nicolas Lunven, Yann Eliès, Axelle Pillain and Antoine Auriol (on board reporter).

Having left the yard last July, the brand new 60-footer already has a taste for offshore having competed in the Route du Rhum. “The sensations on this boat are completely different. It’s slightly heavier with a slight banana-shape to the hull that entails a different approach to navigation. It’s also higher which means more space inside and that improves quality of life for all on board,” says Pierre Casiraghi, YCM Vice-President and founder of Team Malizia. “The boat’s designed for the Vendée Globe, so solo sailing, but also with crew for The Ocean Race. It also has many more sensors and electronics. I think Boris and Team Malizia will do very well in this race. He has a lot of experience sailing all over the world with many different teams and boats, whether as crew on Maserati (MOD70) or racing with Francis Joyon on Idec (Ultime) among others”.

After damage incurred during the recent Route du Rhum, the 60-footer was in the yard to have foils replaced: “We’re trying to work out exactly what happened but it’s not that unusual with such recent foils,” explains Boris Herrmann, “The team did an incredible job and turned the situation round in record time”.

32,000 nautical miles round the world to cover in six months
The technical set-back failed to put the brakes on the team’s ambitions as Malizia-Seaexplorer got off to a cracking start, winning the first In-Port race (Alicante) on 8th January a week before today’s start. Nine stage cities are on the programme for the next six months. The first is a 1,900 nautical mile sprint to Cape Verde, a first stop that will allow competitors to focus on sustainability issues at the famous Ocean Week, a cause dear to the hearts of the crew on Malizia-Seaexplorer and the Yacht Club de Monaco.

Starting 25th January, Leg 2 sees the fleet head to Cape Town, South Africa, before setting sail again for a record- breaking distance to Itajaí in Brazil. At 12,750 nautical miles, it’s the longest leg in the event’s history and takes the IMOCAs and VO65s into the Roaring Forties and Furious Fifties of the Southern Ocean. With the Antarctic to starboard, the fleet need to pass all three of the great southern capes – Cape of Good Hope, Cape Leeuwin and Cape Horn - to port and without stopping.

From there they head north, through the doldrums again to Newport, Rhode Island, on the east coast of the United States, before returning to Europe with a transatlantic leg to Aarhus, Denmark, followed by a fly-by of Kiel, Germany, before a stop in The Hague in The Netherlands. Then it’s the Grand Finale leg to Genova, Italy, with first arrivals expected 1st July 2023.

The crew on Malizia-Seaxplorer then return to Monaco in time for the 10th Monaco Energy Boat Challenge.

15 days to go and already 73 teams have confirmed their registration for the first...