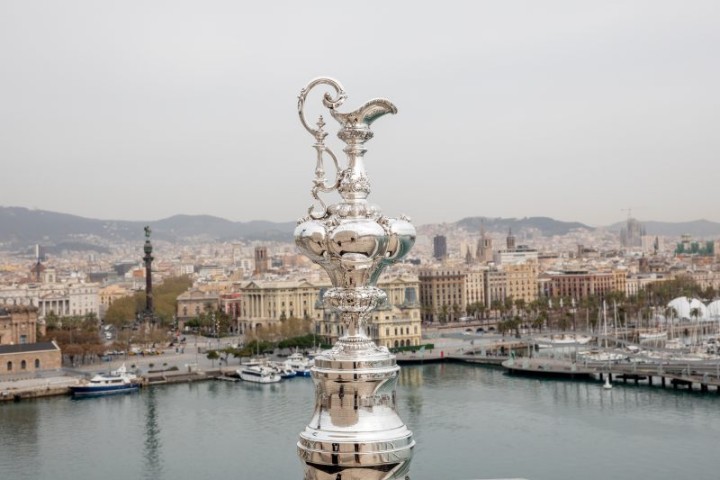 Emirates Team New Zealand and the Royal New Zealand Yacht Squadron are pleased to announce Barcelona, in the region of Catalonia as the Host Venue for the 37th America’s Cup to be held in September and October of 2024.

A mixture of history and modernity, Barcelona is one of the most iconic and attractive cities in the world and will become the first venue in the world to host both an Olympic Games and an America’s Cup event.

America’s Cup Defender Emirates Team New Zealand CEO Grant Dalton is delighted to announce Barcelona as the Host Venue after a long and competitive venue selection process. “Barcelona really is one of the most recognised cities in the world so to have the ability to host the most recognised sailing event in the world is hugely exciting. As Defender of the America’s Cup, we have always felt the responsibility to grow the event, the audience, and the sport of sailing on a global scale and certainly having the event hosted in a significant city such as Barcelona will allow us to propel the growth trajectory on the global sporting stage. When thinking ahead to the 37th America’s Cup and the AC75’s racing within a few hundred metres of the Barcelona beach, waterfront, and race village fan engagement zones it will be nothing less than spectacular.”

Barcelona is a leading city in terms of sustainability and social impact with ambitions to become Europe’s digital and tech capital, so the alignment with the America’s Cup is clear. Its existing world class facilities for racing, team bases, technical infrastructure, superyachts, and areas for the America’s Cup event village to host fans, hospitality, and media as well as an average wind range of 9-15 knots during the September and October race window, made the city completely fit for purpose.

Barcelona’s bid saw an unprecedented alliance across public and private entities working together to attract the America’s Cup to Barcelona which included the Government of Catalonia, Barcelona City Council, City Hall of Barcelona, Port of Barcelona, Barcelona Global’s investment agency and Barcelona & Partners, a non-profit initiative composed of more than 200 of the city’s leading institutions aiming to make Barcelona one of the world’s best cities for talent and economic activity.

The president of the Generalitat de Catalunya, Pere Aragonés, explained that the celebration of the America's Cup in Barcelona is excellent news for the city and for the whole country, "It is an historic sporting event, which has a great projection worldwide at an international level, economically and for tourism”. “The America’s Cup is not just an isolated sporting activity and offers significantly more than that to the Host Venue. It is an event that it will generate a return across many platforms over years and will leave a very important legacy for Catalonia. I am very satisfied because for the first time, the America’s Cup will also include a specific Women’s America’s Cup regatta in Barcelona.” 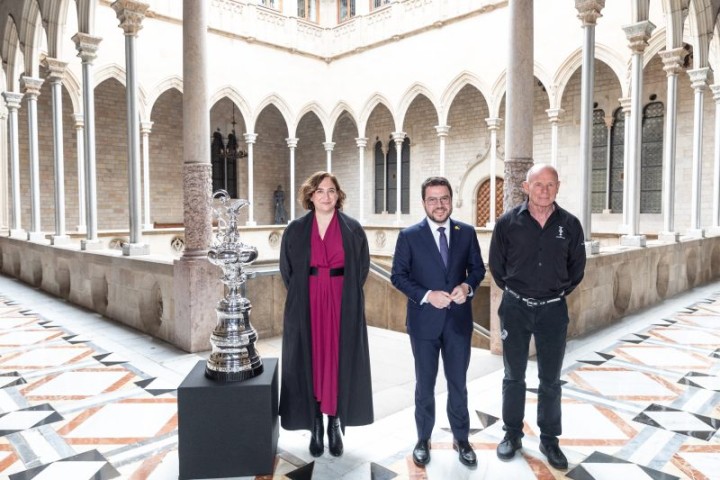 The Mayor of the city of Barcelona, Ada Colau, celebrated the election of Barcelona as the venue for the 37th edition of the America's Cup, the oldest sailing race, "It is great news for Barcelona! This should serve to promote the city to the world after the pandemic, to benefit Barcelona’s tradition of this sport in a city by the sea and in addition, to boost the emerging sector of innovation and technology, linked to nautical activities. I want to thank all the public and private institutions for their support and complicity in this project”.

Damiá Calvet, the president of the Port of Barcelona, an integral part of the successful Barcelona bid, said "We have made Port Vell available to the city and the country to be able to celebrate an America's Cup that projects Barcelona to the world and that has innovation and sustainability as its flagship. We will make the most of the infrastructures that we already have, we will boost the economy and employment and finally, we will leave an enduring legacy". 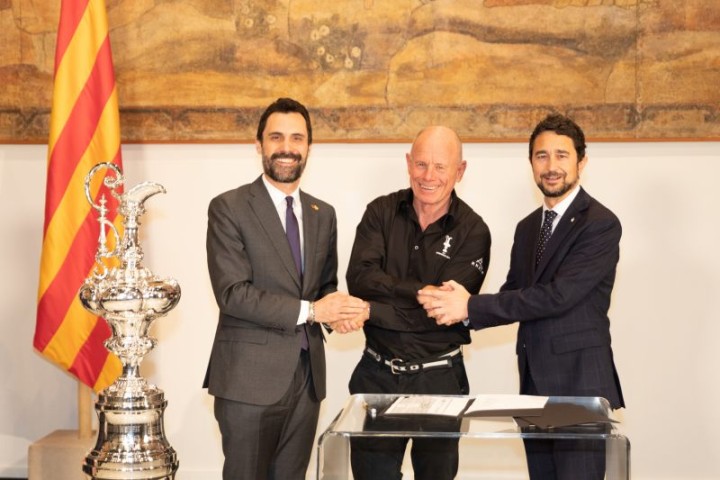 ©SailingShots by María Muiña / AC37
(L to R) Roger Torrent, Minister of Business & Labour of the Government of Catalonia. Grant Dalton. Damiá Calvet, President of the Port of Barcelona

A fundamental approach that not only Barcelona, but all the shortlisted venues, brought to the table was clear ambition to partner with the America’s Cup Event in delivering the best America’s Cup ever across all aspects of the Cup; infrastructure, a true partnership approach, organisation and world class facilities. Combined with their drive into a more sustainable and innovative future via hydrogen marine technology, Barcelona is the perfect place to hold the first ever Women’s America’s Cup and the Youth America’s Cup. 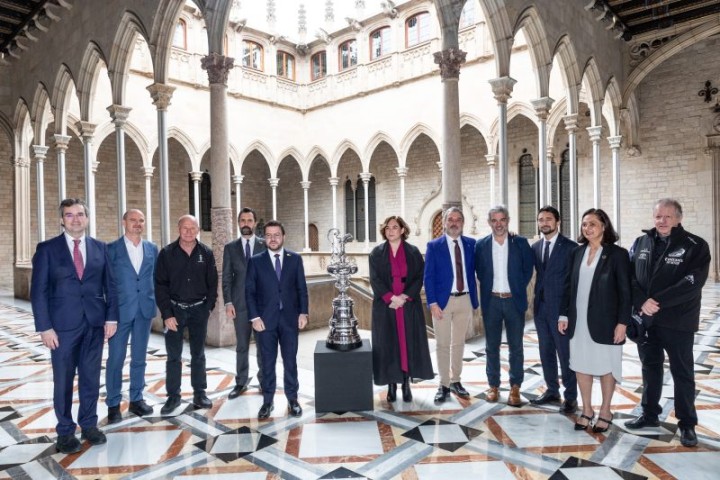 As current holder and Trustee of the America’s Cup, the Royal New Zealand Yacht Squadron is looking forward to continued success for New Zealand sailing and growth of the America’s Cup and welcomes the announcement of Barcelona as the venue for the 37th America’s Cup Match. “Barcelona holds a very special place in New Zealand’s sailing history and we remember with pride the success of our 1992 Olympic Games sailing team and four medal result”, said Commodore of the Royal New Zealand Yacht Squadron Aaron Young. “Barcelona will be a stunning venue for the America’s Cup racing and the Women’s and Youth regattas, and we look forward to defending the America’s Cup there in 2024 as we work to promote and grow the sport of sailing around the world. There are also significant opportunities for our New Zealand marine industry, trade and sailors. Our members will enjoy exclusive benefits and travel options to Barcelona, and we anticipate a large delegation of Club members travelling in support of our Team in 2024”.

Integral to the organisation of the 37th America’s Cup is the Challenger of Record INEOS Britannia and the Royal Yacht Squadron Ltd who have played an important part in setting the foundations of the next edition of the oldest trophy in international sport. INEOS Britannia Team Principal Sir Ben Ainslie said, “We are delighted the iconic city of Barcelona has been chosen to host the 37th America’s Cup. The historic weather data for Barcelona shows what a fantastic sailing venue it will be. The marina development and race area in Barcelona will offer excellent shore side facilities for the competing teams, alongside a great event village for fans of sports oldest international trophy to enjoy this iconic sporting event.

For 30 years Ngāti Whātua Ōrākei have been proud iwi manaaki and close partners of Emirates Team New Zealand and their America’s Cup endeavours both at home and off shore and are looking forward to helping the team promote New Zealand and its culture in Barcelona and the opportunities the 37th America’s Cup provides being hosted in Europe. “Wawaratia ngā tai rere. Through this relationship we have had great satisfaction in sharing our manaakitanga with manuhiri visiting our shores here in Tāmaki Makaurau” said Marama Royal, Chair, Ngāti Whātua Ōrākei Trust. “We’ve also experienced immense pride in sharing the Māori culture and the best of Aotearoa’s innovation and warm kiwi nature when representing the New Zealand story off shore. The America’s Cup event is about both acknowledging the past and looking to future opportunities for Aotearoa so we look forward to our ongoing role as kaitiaki to the team and helping promote New Zealand’s unique culture in Barcelona and on the world stage in 2024 right alongside Emirates Team New Zealand.”

In the process of working with the prospective host cities around the world, Emirates Team New Zealand together with Origin Sports Group, have been overwhelmed with the response and ambition of the venues towards the America’s Cup. “I must acknowledge the absolute commitment of the other final host city candidates, Cork in Ireland, Jeddah in the Kingdom of Saudi Arabia and Malaga in Spain and all of the phenomenal people that were behind the bids putting in so much effort to illustrate the exciting vision for their cities and for the America’s Cup. But in the end a difficult decision had to be made to select only one.” said Grant Dalton.

Further details on the venue and 37th America’s Cup will be announced in due course. “Obviously all of this news is announced in the shadow of the unfathomable war in the Ukraine we are witnessing right now, which clearly puts everything in perspective for us”, said Dalton “We sincerely hope there is a rapid improvement in the situation, and we would like to send our strong message of support to the people in Ukraine during this period. We look forward to working in partnership with our Host Venue of Barcelona and announcing further details in due course.” 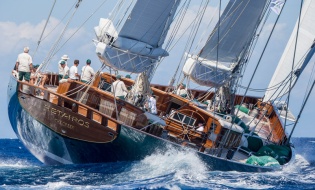 Maxi Yacht Rolex Cup - The One That Matters

With 40 yachts gathered in Porto Cervo, the 2015 edition of the Maxi Yacht Rolex...