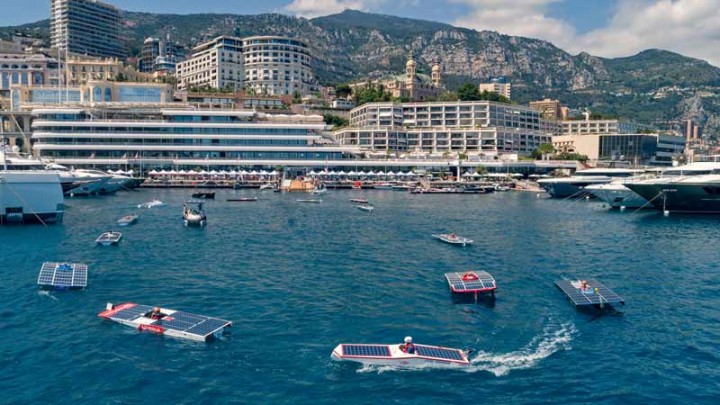 From 2-6 July, the Yacht Club de Monaco becomes the place to be for any initiatives supporting research and development into a sustainable future for the maritime sector.

On the sea, 34 prototypes developed by budding young engineers, working with boat building professionals, will be competing in match racing, slalom and endurance races. Ashore, industry players will showcase their innovations in the exhibitor village (free entry) and discuss latest advances in propulsion systems for yachting at conferences. The public are welcome to walk around the paddocks to see the prototypes and follow the races live on a giant screen. For contestants, a packed programme awaits them in this quest to meet tomorrow’s energy challenges and propose concrete eco-friendly solutions.

Launched in 2014 by the Yacht Club de Monaco in partnership with the International Powerboating Federation (UIM) and Prince Albert II of Monaco Foundation, the Monaco Solar & Energy Boat Challenge is unique in the world. For a week, students and boating professionals participate in an international competition, the goal being to imagine and develop alternatives to fossil fuel propulsion, based solely on renewable energy sources in three categories of boat: Offshore, Solar and Energy.

AN INTERNATIONAL PLATFORM INVENTING THE FUTURE

Be it the energy source, the way they have optimised a design, or improved the capacity of batteries, 34 teams totalling 300 participants from 14 nationalities, including a team from Asia (Universitas Indonesia), have not lacked imagination. All boats can be viewed in the paddocks on the quays of the YCM Marina from Tuesday 2nd July. On 4th July after an opening parade at 10.00am, the first of the contests begin: slalom, endurance, match races and the speed record, all of which can be watched from the main harbour wall of Port Hercule 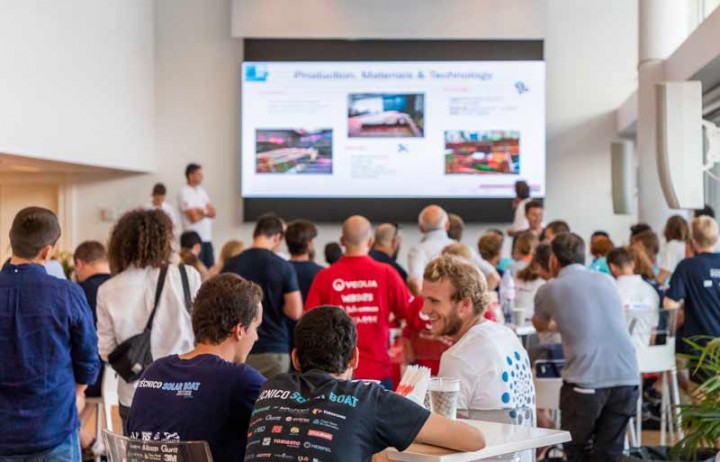 Sneak preview of projects with potential:

In the Solar Class all competing boats are powered only by the sun. The Dutch Solar Boat Twente team have taken the broad view, developing a propeller that boosts their propulsion system’s efficiency by 35% compared to a conventional propeller. This year the category has no less than 19 entrants mainly from north Europe (11 from The Netherlands) as well as two Mediterranean teams (Italy and Portugal).

Entrants to the Offshore Class have their work cut out on an offshore course from the Principality of Monaco to Ventimiglia, Italy. TU Delft have built a modular solar trimaran (around foils, beam width, central position on the hull, etc.) to optimise their boat’s performance depending on sea conditions. There are seven teams in total, two of which are Italian, one from the Politecnico di Milano and the other from Anvera who are set to christen their boat on 4th July.

In the Energy Class, candidates have had to design a propulsion system using a renewable energy source of their choice, but all teams are restricted to work with a given amount of energy. One of the highly anticipated projects is the Monaco-based SBM OFFSHORE E Racing Team, which has been working with hydrogen to power a fuel cell, a hybrid system as the heat generated by the fuel cell is deployed to optimise the battery that is approaching a record 80% efficiency. 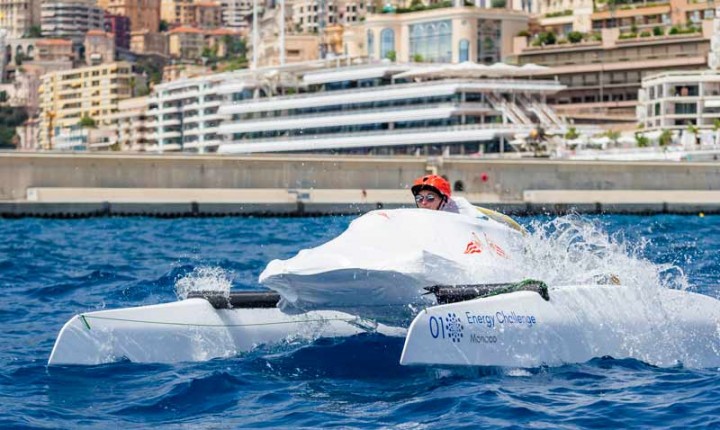 Launched in 2018, the Energy Class has already proved a big success with seven teams in the running, including one from the Université des Arts et Métiers d’Aix-en-Provence, one of three French teams present in this category.

PLATEFORM FOR NEW GENERATION TO GET TOGETHER WITH THE INDUSTRY

Ashore, Tech Talks and “job dating” will be going on all week, as major players in the maritime sector take to the floor to exchange ideas and discuss the way forward for mobility in general and clean energy for the yachting sector.

Hydrogen in the spotlight:
Opening the debate is the Monaco Hydrogen Round Table on Wednesday 3rd July in partnership with the Prince Albert II of Monaco Foundation, bringing together specialists and Monegasque institution representatives to discuss the feasibility and potential of having a hydrogen facility in Monaco.

Three conferences, with priority seating for professionals, will be an opportunity to delve deeper into topics such as:

The exhibitor village which is open to the public showcases innovative sustainable technologies from ten companies working in the maritime sector. Most are already on the market and are proof that the boating sector is keen to taking sustainability seriously for the leisure boating sector. 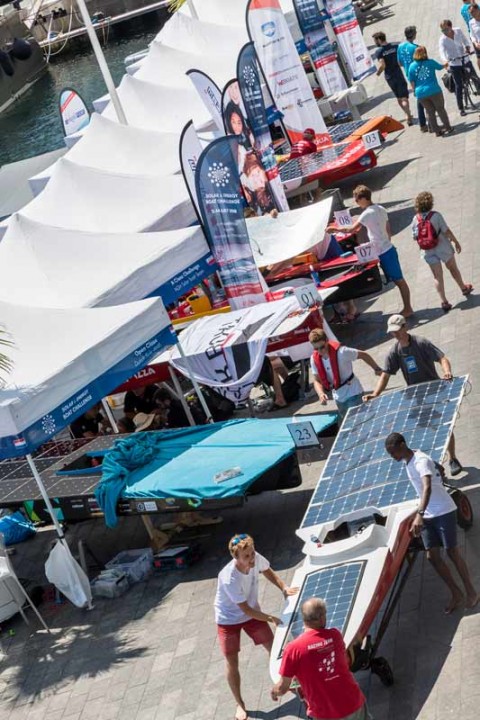 At the end of each day, any of the teams have a chance to pitch their projects at Tech Talks and share information with their peers on Open Source; the public are more than welcome to attend. A jury of experts will also be awarding prizes, including the Zero Emission Award and also the Innovation Prize donated by Credit Suisse which is offering to help the winner put together a business plan, an indispensable tool when looking for funding.

Tech Talks will be followed by Job Dating sessions in the form of a Happy Hour, an opportunity for students to meet companies in the boating sector. This is in addition to the permanent online web platform set up where the industry can advertise job vacancies and students can upload their CVs.

To maximise its mission to get as close as possible to Zero Emissions, initiatives to reduce the event’s carbon footprint will be in action all week, for example solar ovens, electric or hydrogen cars (Toyota Mirai), and electrical charging points for boats, a world first launched in the Principality.

Through the Monaco Solar & Energy Boat Challenge, the YCM and its partners intend to play their part in finding innovative solutions to the energy and environmental challenges of the 21st century, their main target being to work towards a cleaner greener boating sector. 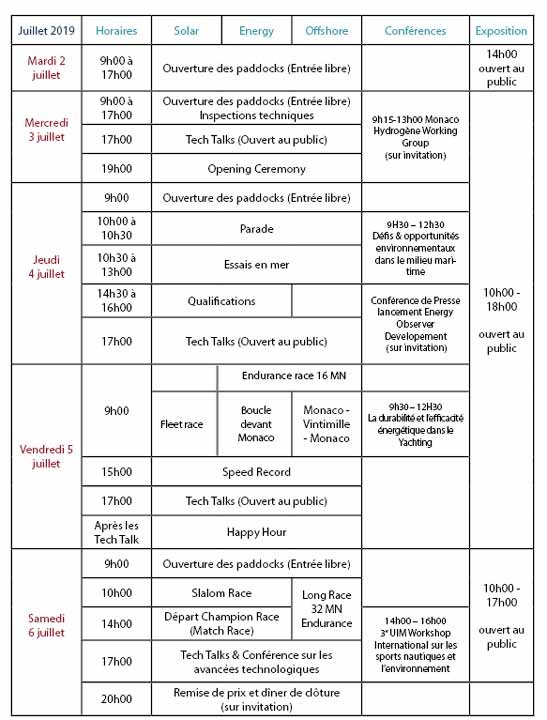 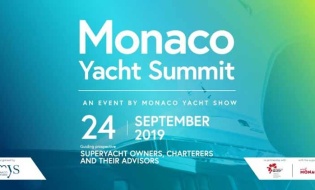 The 4th edition of the Monaco Yacht Summit will address an audience of potential yacht...