The Grand Soleil 48 Performance is born by the cooperation between three important teams: the Technical Dept. of Cantiere del Pardo, Nauta Yacht Design for the interiors and the deck, and Marco Lostuzzi for the naval architecture.  Their expertise has translated into an important project. First goal: creating a fast and performing sailing boat.

The new Grand Soleil 48 Performance belongs to Cantiere del Pardo’s Performance category. Double offer for his owners: two different products to meet two different kind of customers’ needs. On one hand, the Long Cruise, which satisfies long cruise-lovers; on the other hand, the Performance, thought for sport-loving owners who look for a highperformance boat, perfectly fit for races. An aspect Cantiere del Pardo has always believed in, if we think about the Grand Soleil 40, the bestseller boat – 290 units sold.

Designed by Massimo Paperini in 2001, she won many awards all over the world and was already available in two versions: a more racing one, with a wider sail surface and a bigger draft, and a more cruising one with greater comfort.

The new Grand Soleil 48 Performance born this way. Thanks to the help of our Grand Soleil “winning owners”, who have played an essential part in the project development, the boat finds its real “riding horse” soul in the Race version. The top efficiency of the “Performance” version is enhanced by the “Race” one: thanks to the complete deck equipment, welldimensionedand correctly optimized, as well as the well-analysed hull lines, the Grand Soleil 48 Perfomance is the perfect boat to compete at the highest levels both in inshore and offshore races.

Avant-garde technologies have been used to reach that goal: the fluid dynamics CFD for all the structures – more than a month of work for drawing the definitive structure, after 120 sketches – and the FEM analysis of all the structural parts in order to better study the loads and the weights distribution. The result? A boat characterized by speed, lightness and rigidity. The project is dedicated to those owners who love having fun, sport-cruising and offshore races. Fast, stylish and elegant: these are the main characteristics of this boat, which recalls both the Grand Soleil 58 Performance and the smaller Grand Soleil 34’s family feeling.

First-class materials and techniques have been used for this important project. The main characteristic of the Grand Soleil 48 is that the owner can choose among different kinds of construction: the infusion of the Race version can be done either in epoxy resin and fiberglass or in epoxy resin and carbon with four composite bulkheads. The Performance version, instead, is hand-laminated and realised in vinylester and fiberglass (the main bulkhead is made of composite).

In both the versions the bulkheads are veneered to the hull, creating a unique single structure which can easily support the loads of the mast, the keel and the shrouds. In the Race version, moreover, the frame is made of carbon unidirectional fibre). All the female moulds have been made by numeric-controlled models in order to obtain the best precision. As far as the keel is concerned, it has a high-resistant steel blade, while the torpedo is made in lead. In the Race version, the keel has a 3 mt draft: that guarantees a considerable stability. The single wheel, high draft rudder is in carbon in the Race version, while it has a steel axis and fiberglass blade in the Performance version.

THE DECK: FROM PERFORMANCE TO RACE

The deck plan is one of the most interesting features of the new Grand Soleil 48. It is indeed what mainly distinguish the Race version from the Performance one. The first one has six or eight winches on the deck - it comes with two aft winches to regulate the split backstay - , a hydraulic piston at bow to regulate the stay, a jib equipped with diagonal tracks and a dolphin striker 100% longer than the Performance version one, which gives a wider sail plan surface.

The Performance version is equipped with four winches nearby the rudder and standardself-rotating jib that allows an easy manoeuvring of the boat and a greater comfort even to the smallest crews. 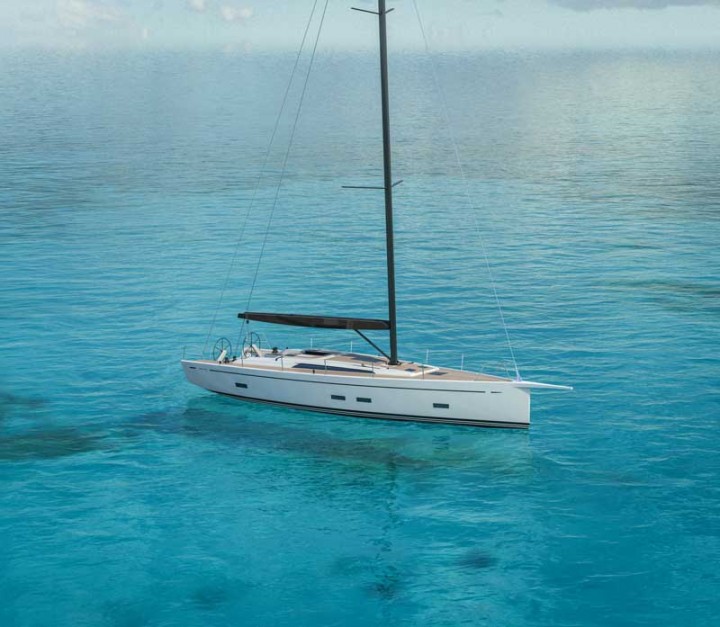 Simple technical solutions have been well integrated to the deck aesthetics. This excellent combination has given as an outcome a wide cockpit, a neat-design and comfortable deck, excellent performances and speed during the races, easy manoeuvring when cruising. As far as the external layout is concerned, there is the possibility of placing the windows following the owner’s needs – which can be taken to extremes in a completely “nude” version.

A POWERFUL AND EASILY-HANDLING SAIL PLAN

The sail plan has been studied for a long time with fake VPP speed programs. The outcome is a powerful but easily handling sail plan. In addition to this, all the manoeuvres have been put back to the cockpit. At bow, the fixed dolphin striker has been designed to hoist both the gennaker and the Code 0, which can be easily hoisted and furled directly to the sail locker. The first three boats sold belong to the Race version. The first one has a square top main sail and PBO shrouds, while the other two are in carbon.

The mast, characterised by a double cross-tree order with a 9/10 stay, can be in carbon or in aluminium. Through the split backstay, instead, it is possible to reach the tender garage from the aft.

The spaces under the deck have a wide beam and a free board that give spacious and comfortable interiors with three cabins and two heads, both with separated shower stall – a fantastic solution for a race soul boat -, the kitchen, the saloon and the chart work. The natural lighting gives more comfort, because it gets through the windows located on the hull and on the deck. All the interiors are made with high quality materials in accordance with Grand Soleil’s unique style: in the Race version, the lightened woods allow to save 30-40% of weight.

As far as the Race version is concerned, thanks to the modular parts the boat becomes lighter and creates more space in order to stretch out the sails without damaging the furniture.