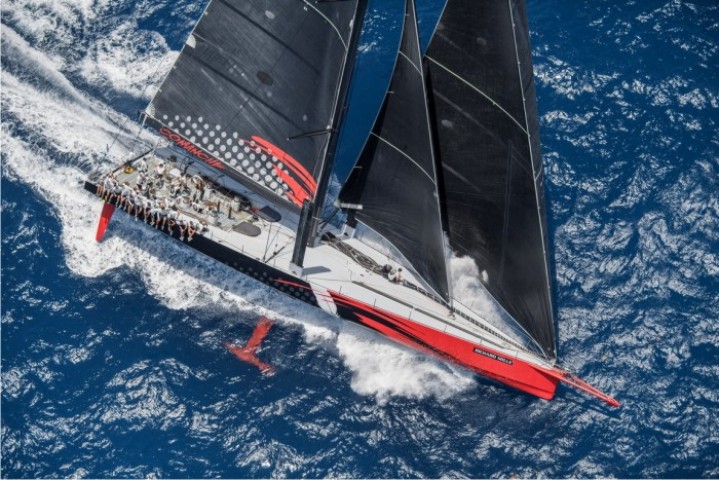 Update off Comanche from Ken Read: “What started off as a very frustrating light air Transatlantic Race 2015 has turned to gold for all of us aboard Hodgdon's 100 foot super-maxi Comanche.

Approximately 1300 miles out of Newport, Rhode Island in the North Atlantic we set up underneath an approaching low pressure. We've had a phenomenal stretch of strong wind and reasonably flat sea which has propelled us to what we believe is a new record for the greatest distance covered by a monohull in a single 24-hour period*. Still to be ratified off the boats tracker by the World Sailing Speed Record Council, we believe the distance will be at least 620 nautical miles. Hodgdon Comanche is still on the same course and the distance could still grow as the record calculation is made off the most miles in 24 hours. We are currently going faster now than we were at the start of the run.

After jibing to starboard about midnight EST on July 9th navigator Stan Honey and I had a long talk about the chance that we had a possible weather and race course window that may give us a run at the 24 hour record. The previous 24-hour monohull distance record was set by Ericsson 4, skippered by Torben Grael in the Volvo Ocean Race 2008-09 race. They covered 596.6 nautical miles (1104.9 km) during Leg 1 between Alicante, Spain and Cape Town, South Africa with an average speed of 24.85 knots (46.02 kilometres per hour)

Comanche was built with the ability to sail the boat using only human power, allowing the boat to qualify for record attempts like this. Stan and I decided at that time to sail the boat during the entire time period surrounding any possible 24 hour record in the manual power configuration that the WSSRC requires. Turns out this was probably our best decision of the race so far.

The 20 person crew aboard couldn't be more proud of this achievement. A special thanks to Jim Clark and Kristy Hinze-Clark, the designers, the builder – Hodgdon Yachts - that helps manage this amazing campaign. And of course thanks to Comanche for seriously having some jets.”