CDM has further good news to share with you: welcoming a new member into the Darwin Class fleet. A highly customized Darwin 86 has been sold to an American Owner.

It is the sixth Darwin 86 sold since the Darwin Class debuted ten years ago.The Darwin family counts as many as 15 members up to now, the largest being the recently delivered Darwin 112.

The sale of another Darwin 86 confirms the strong market reception to a concept and design created by CDM together with exterior designer and naval architect Sergio Cutolo/Hydro Tec. “This is an extremely well-optimized design,” says Vasco Buonpensiere, co-founder and Sales & Marketing Director of CDM. “We invested a lot of time fine-tuning it,looking back at the Darwin Class past, learning from Owners, Captains, surveyors’ experiences. This Darwin 86 will be a yacht built for adventure – custom designed to explore far-reaching destinations without compromising on comfort and luxury.”

The American Owner asked for a series of custom features both stylistic and technical that required a meticulous feasibility study and he personally chose most equipment such as Scania engines, Northern Lights generators, ABT stabilizers and thrusters, Steelhead cranes, and photovoltaic panels to have energy produced while at anchor. He decided to have a Darwin built according to his needs and requirements as he wanted to have more volume and more customization compared to his previous yacht.

He will be indeed Captain to his own yacht and knows well what suit him best from technical aspects to functionality, layout and amenities. Among the new Darwin 86 main peculiarities there is a different design of the bow that will feature a gentle sheer, an open stern with stairs (as those on the Nauta Air series), and a carbon hard top.

Four guest suites, Owner stateroom included, will be located on the Lower deck. Crew quarters (two cabins and dinette) will be as well appointed as the guest areas. On the main deck, an open plan lounging and dining area includes also a galley while on the Upper deck a gym will be at guest disposal. A panic room will be available in case of attack. Its location won’t be disclosed.

The yacht will have two tenders, a Williams 565 and a 3-metre tender. “This explorer yacht will feature the usual CDM top, redundant equipment as well as an extra accessible engine room,” says Carlo Aquilanti Sales Manager of CDM. “This Owner chose us as he has a deep knowledge of what means to sail far and wide and how reliability and seaworthiness are crucial to the safety and success of the more challenging navigations. Our explorer yachts are built to face the toughest sea conditions in total safety and comfort and the Darwin 86 hull n.2 crossing the Atlantic in this very moment for its fourth time confirms our Darwins qualities.” 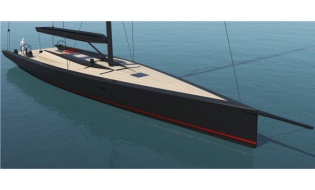 New evolution for the regatta favourite promises to take line honours in its class. Philippe... 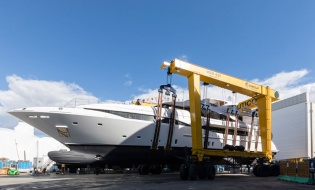 The Overmarine Shipyard reinforces its presence in the Long Range displacement vessels segment. In fact...