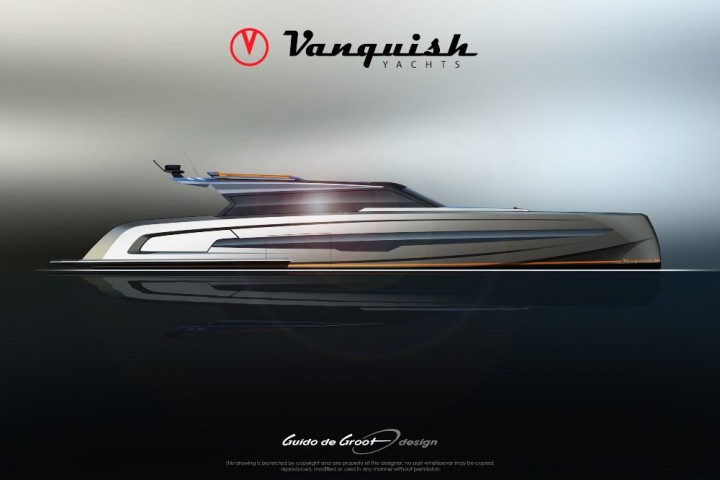 Vanquish Superyachts in the Netherlands has received a new order for what is set to be the world’s fastest aluminium superyacht with normal – albeit state-of-the-art – diesel engines.

The very first VQ115 Veloce has been commissioned by and developed with a repeat client who loves entertaining large groups of people. He will do so in true Vanquish style on a remarkable tri-deck powerboat that will set a blistering pace of 53 knots. With the enormous fun he has had on his current Vanquish still fresh in his mind, the client was well aware of the Dutch yard’s capacity in terms of customisation. He also very much enjoys sparring with Vanquish founder Tom Steentjes, who is renowned for his no-nonsense, non-traditional approach. This launch model for the VQ115 Veloce line is the result of their recent brainstorming sessionsabout a Vanquish that will enable extended stays on board and a wide range of sports and entertainment facilities. Like every Vanquish superyacht it will be a bespoke model that makes optimal use of the inherent flexibility of boatbuilding in aluminium to meet all client requirements.

Evolving ideas
The initial discussions were based on design concepts for a VQ90 but quickly evolved as the owner added an extra cabin, a dedicated dining area on the lower deck and two garages. The resulting 35-metre motoryacht ultimately has more of everything that makes Vanquish powerboats unique in the market while remaining totally in tune with the brand DNA. That means no compromises in terms of speed, with the installation of the largest engines possible – a trio of MTU-Rolls-Royce 2600s. Backed up by surface drives, this setup will power the VQ115 Veloceto an exceptional speed of 53 knots. This makes it quite possibly the fastest aluminium yacht over 30 metres with ‘normal’ diesel engines – i.e. non-turbine-driven– built to date.

Design challenges
While all Vanquish boats are famously fast, this combination of length and knots posed such an extreme challenge that the entire design trajectory revolved around this issue. Studio Delta in the Netherlands is responsible for the naval architecture of the hull, working in tandem with Swedish company Petestep to optimise comfort and performance levels and increase efficiency by over 15% at top speeds.

Exterior designer Guido de Groot and his team have a relatively narrow hull on which to base their design. The engines will be placed in a trapezium shape with the middle engine forward. Two gyro stabilisers will enable the retention of another typical Vanquish characteristic – genuine comfort at all speeds – on this smart synthesis of a race boat and luxury yacht. An impressive range of up to 600 nm will be possible when running on one or two engines, with an extra fuel tank available for cruising at lower speeds.

This is entertainment
Despite the phenomenal propulsion package, lots of space remains aft for a large tender bay that will house a VQ16. This mighty craft will be launched by a dedicated tender system, while a multifunctional hydraulic platform will ensure easy access to and from the water via a passerelle and swimming ladder. Another tender in the form of a VQ11 waterscooter will be housed in a second garage on the starboard side. This area will double as a leisure playground with a live bait tank, paddleboards, sea bobs and other toys. A hydraulic ladder will make diving a breeze.

Outdoor entertainment is a major factor in all areas of the yacht; while this is the norm on every Vanquish, the theme is being literally and figuratively taken to new lengths on the VQ115. The expansive foredeck, for instance, has a large seating area for lounging and dining, plus the option to lift up the sun beds and create a saltwater jacuzzi. There is a wealth of relaxation options on the aft deck too while the flybridge has a dedicated sunbathing area as well as its own helm station 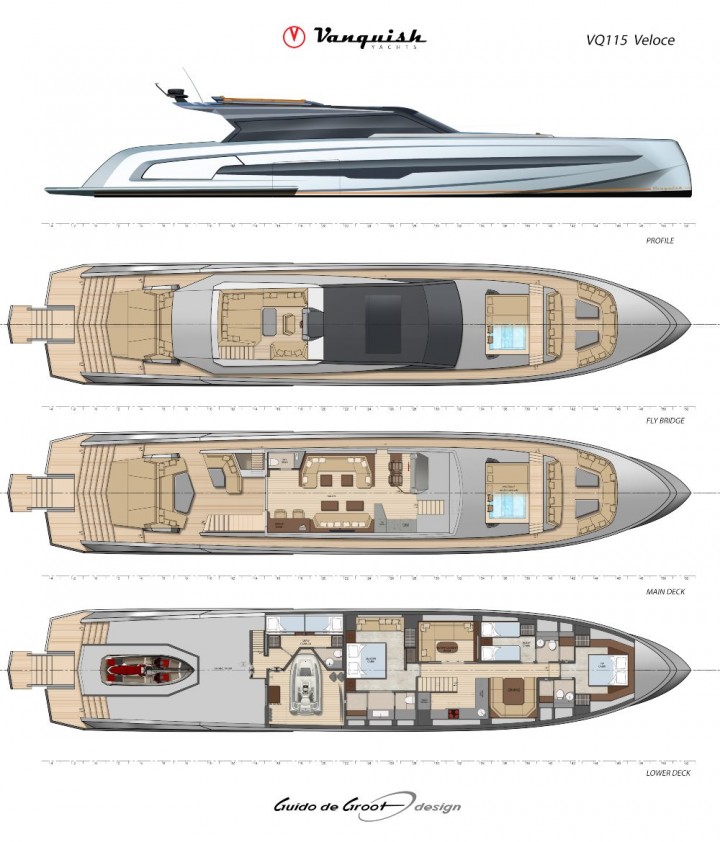 Instantly recognisable
The flybridge has been superbly integrated within a distinctive exterior profile, part of a pure design with clean lines and that sexy, elegant, instantly recognisable Vanquish look. Those sharing space on the water with this powerhouse will certainly be glad of the advance visual notice as the negative bow heads their way.

The interior features a futuristic style to match the exterior design, with a casual groove, emblematic Vanquish details and 45-degree treatments. A smart layout makes optimum use of the enlarged space available. The main deck saloon will be fully tailored to the owner’s wishes with movable furniture to allow flexibility of occasion and time of day. Office space is included for when work calls, there is a neat pantry with its own cocktail bar, plus a day head to keep the lower deck private. Stairs rise to the sport flybridge above while the aft door opens fully to create a unified space with the aft deck: matching floors will ensure continuity between the outdoor and indoor spaces.

The lower deck features a more extensive galley and a U-shaped seating/dining area in a country kitchen style. Accommodations include a full-beam master suite, a VIP and a guest cabin, all with their own bathrooms. A dedicated media room includes a large television, a high-end sound system plus two Pullmans that bring the potential sleeping capacity to eight. There are also berths for four crew members.

Who’s next?
This potentially record-breaking powerboat is due to be delivered to the Mediterranean at the end of June 2022 so the owners can enjoy the summer before having her transported Stateside for the Caribbean season. With the Hamptons as the next destination in 2023, the first VQ115 will spread the Vanquish gospel far and wide

Two further models of this striking new line will go into production soon, allowing other clients attracted by the Vanquish ethos to enjoy the same amount of interior space. In addition to customising the interior and exterior facilities to their personal preferences, owners who appreciate the design but prefer not to go so extremely fast can adapt their engine configuration accordingly.

Future perspectives
The VQ115 will be hand-built at the new Vanquish Superyachts yard in the Netherlands. Spanning some 5000 square metres, the facility can cater for three large premium yachts simultaneously.

Having recently signed the order for a VQ80 SportFish, Vanquish Superyachts is on prolific form, as is sister company Vanquish Yachts which is busy with a formidable fleet of projects including the VQ68, VQ58, VQ52, VQ50 and VQ45 in aluminium and the VQ40, VQ16 andVQ11 in composite. All benefit from the unique modus operandi of a next-generation yard with very short lines of communication and the latest in engineering expertise. 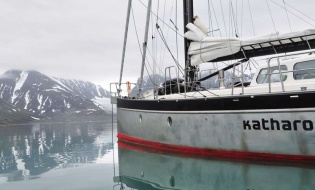 KM Yachtbuilders will be taking part in the upcoming Hiswa te Water in Lelystad with... 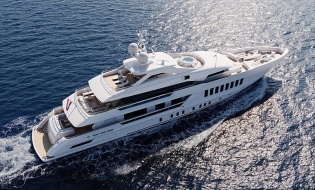 Heesen introduce to the market the latest in the 55-metre Steel class, YN 19755 Project...