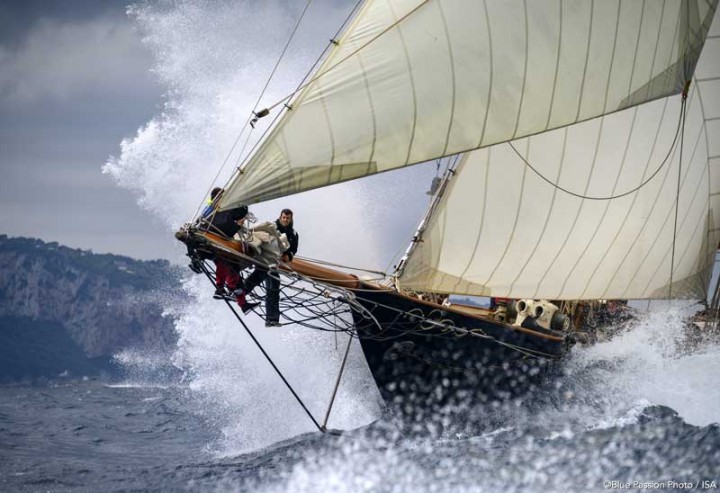 For day two of maxi schooner competition at this inaugural Capri Classica, the Gulf of Naples took on a northern European feel with an overcast sky, Vesuvius obscured by the mirk and a dark grey cloud parked over Capri’s highest summit giving the appearance that the island was about to erupt.

But with this cold front came what are likely to be the biggest conditions of this four day event, with winds at times gusts above 25 knots. To make the most of the big breeze, the race committee laid on a course taking the boats from the start area, due north of Capri’s Marina Grande, to a turning mark just south of Punta Campanella at the end of Sorrento Peninsula and from there back past Capri’s famous Faraglioni stacks and onto a clockwise lap of the island, finishing back at Marina Grande, where the boats are moored. The first two thirds of the race were especially lively. 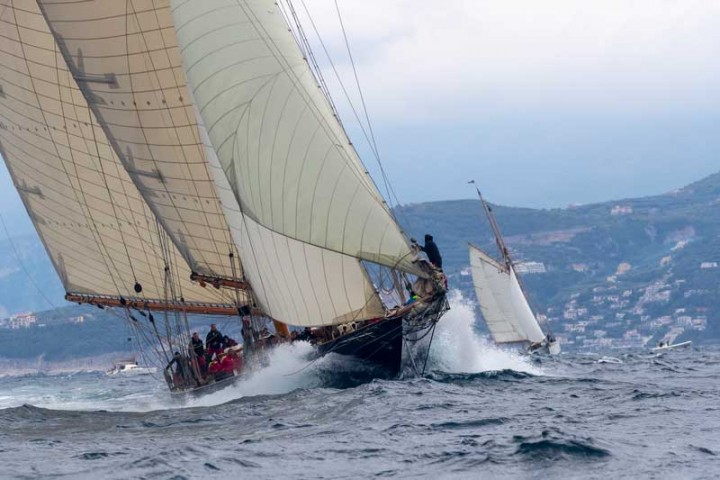 In a reversal of fortunes, today it was the turn of Mariette of 1915 to set agenda. With her smart navy topsides, the 138ft 1915 Nathanael Herreshoff gaff schooner made the best start, immediately pointing higher than her arch-rival, the 128ft Naema, winner of yesterday’s race. Mariette of 1915’s superior upwind pace allowed her lead to increase as the frontrunners passed between the Sorrento Peninsula and Capri. By the time Mariette of 1915 rounded the first turning mark off Punta Campanella she was already some 10 minutes ahead of her rival.

“We had the right sails up today and that meant we were much more comfortable upwind,” explained Mariette of 1915’s captain, Charlie Wroe. Out of the start line, Mariette of 1915 was flying her main topsail (and not her fore topsail) whereas Naema was flying no topsails initially but then hoisted by a topmast staysail. 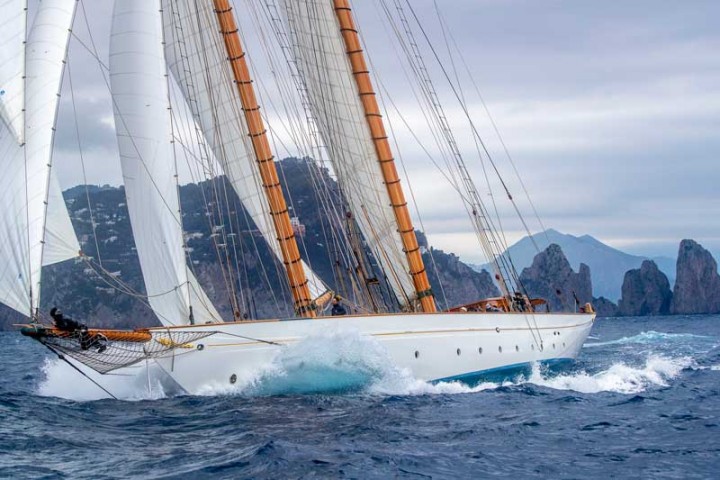 Benefitting from being first on to the run caused Mariette of 1915 to extend; Naema’s superior downwind pace less evident today perhaps due to her having less ballast and less stability than her rival in the big breeze. Certainly witnessing Mariette of 1915’s 180 tonnes thundering downwind at 12 knots, under full canvas, including her fisherman, blasting apart the substantial seas that were otherwise hammering Capri’s southern shore, was a sight to behold.

As Wroe later enthused: “These are the best boats in the world to go sailing on – anything after this is not half as much fun.

“In breeze like we had today, everyone is amped up because it is more tricky getting the boat around the course. You change the crew configuration around a bit and put some more experienced people on the runners – which you don’t need on a calmer day – and two people on a job that would usually require one person.”

Aside from overstanding at the last gybe “to put a little in the bank” that allowed Naema to make a small inroad into their lead, Mariette of 1915 sailed a near perfect race. After returning to a much calmer Gulf of Naples, in the lee of Capri, she comfortably won the day on handicap from her rival, levelling their scoreline at one-all at this half way stage of Capri Classica.

Bringing up the rear, Puritan retired for a second day, and this left Orianda, the smallest of the four schooners at a mere 85ft long, to complete the course, coming home third. 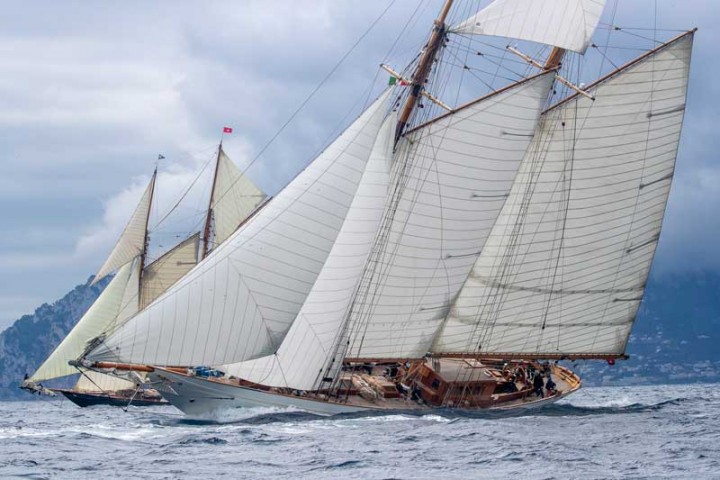 “It was exciting, but unfortunately we made a mistake at the end and initially missed the custom waypoint and wasted 20 minutes getting back to it. That 20 minutes could have got us very close to Naema,” explained Orianda’s captain Sebastiano Marulli d'Ascoli.

Orianda is the only one of the four giant schooners competing without gaffs, and her rig is at present substantially shorter than it was originally designed (this is being rectified next year when 5m is being added aloft) however today’s big conditions were perfect for her, even if the large waves weren’t helping, said d'Ascoli. “We saw 9.5 or 10 knots with the gennaker which was nice. I have been told that Orianda has done 12 but I haven’t seen that. Maybe one day...”

Tomorrow Capri and the Gulf of Naples are forecast to return to lighter, more sunny conditions. The highlight of the day will be the four schooners starting a race from anchor, as was the practice before the present day starts (while underway) were introduced in the late 19th century. 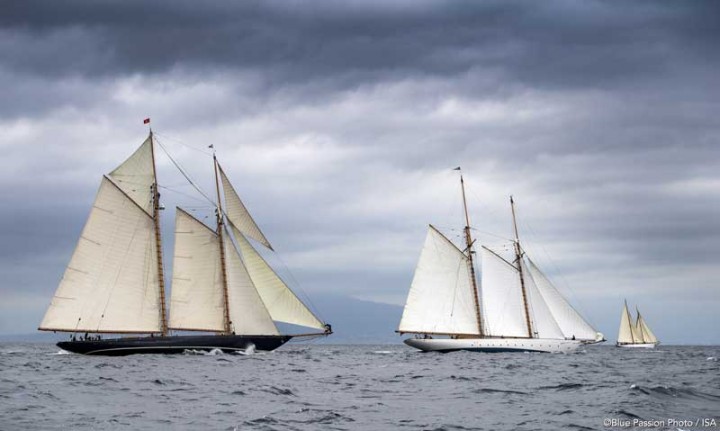 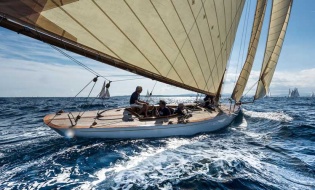 The 6th edition of the Gstaad Yacht Club’s Centenary…

The time has come, all the entrants are in Saint Tropez and getting ready for...