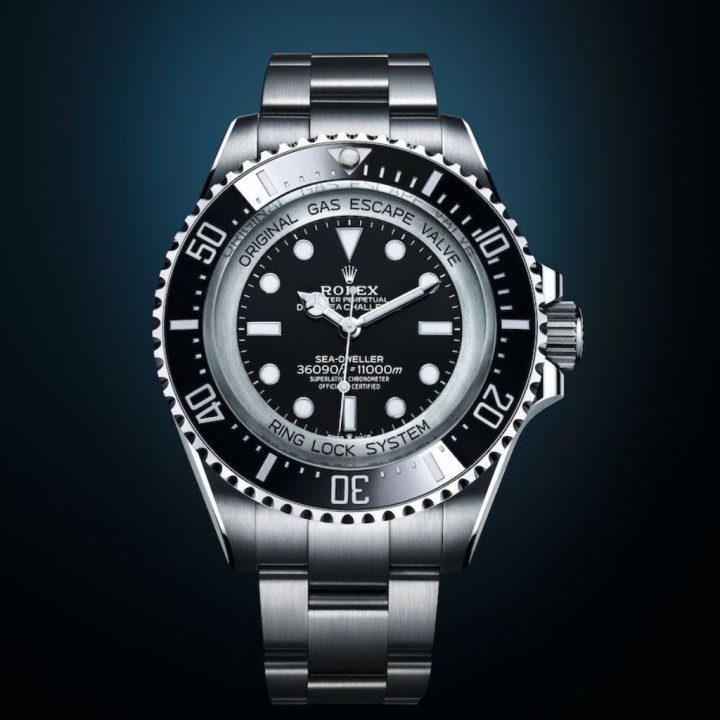 On 1 November 2022, filmmaker and explorer James Cameron unveiled the Oyster Perpetual Deepsea Challenge. Inspired by the experimental watch that accompanied him on his historic 10,908- metre (35,787-foot) descent into the Mariana Trench on 26 March 2012, the Deepsea Challenge represents a new milestone in the world of Rolex divers’ watches. 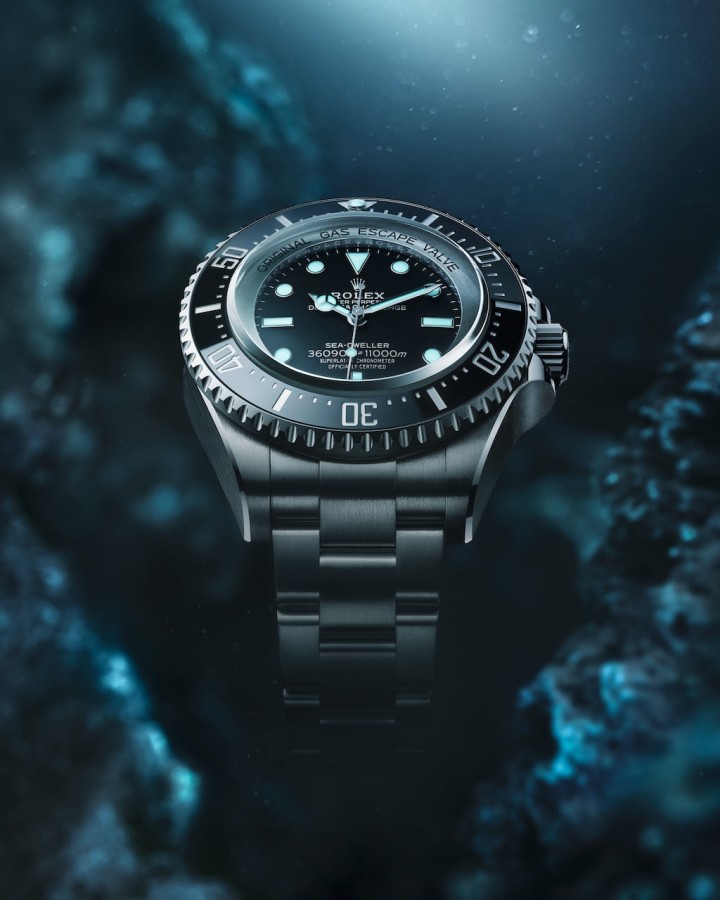 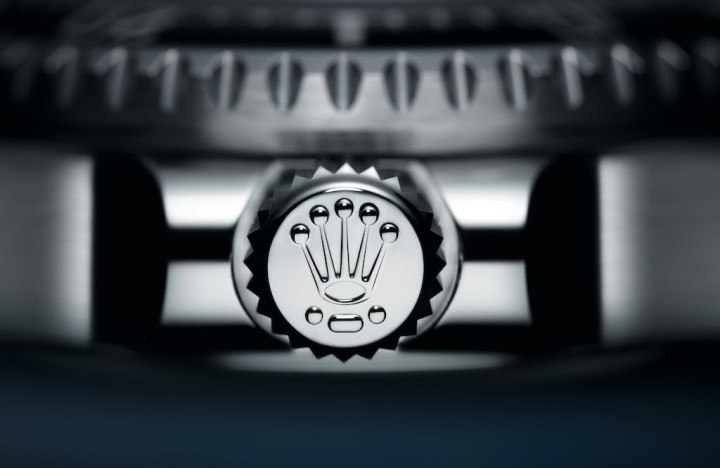 Dot-dash-dot, the three markings indicating that the winding crown of the Oyster Perpetual Deepsea Challenge is made of RLX titanium

Guaranteed waterproof to a depth of 11,000 metres (36,090 feet), crafted from RLX titanium, and equipped with a helium escape valve and the Ringlock system, it is capable of accompanying divers in any environment – during open- water diving, submersible dives or in hyperbaric chambers. A watch designed to turn pressure into an ally in any situation, and an invitation to expand yet further the horizons of the deep. 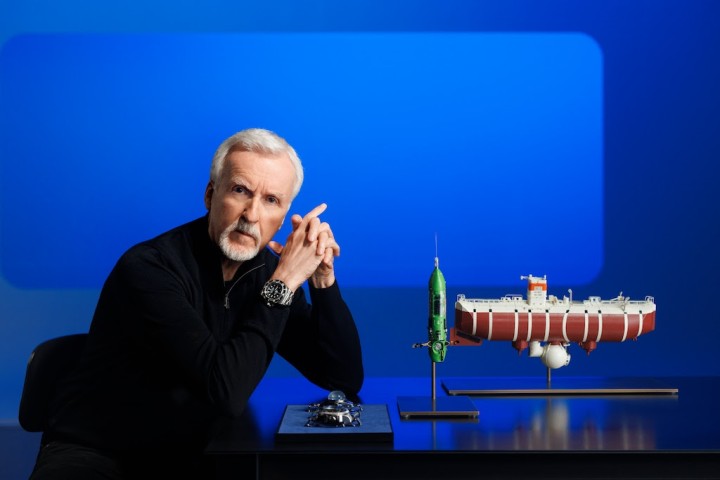 James Cameron, an Oyster Perpetual Deepsea Challenge on his wrist, posing with a model of the bathyscaphe Trieste (right), his submersible DEEPSEA CHALLENGER (center) and (left) the two experimental watches attached to the vehicles during the dives into the Mariana Trench – respectively, the Deep Sea Special (behind) and the Rolex Deepsea Challenge (in front).

The Spectrum of Rolex Expertise in an Exceptional Divers' Watch

The ultimate watch of the deep, the Deepsea Challenge is a diver with unprecedented credentials, designed to withstand extreme pressure. Years of research were required to overcome the watchmaking and manufacturing challenges that its fabrication presented. While the experimental watch of 2012 was attached to the manipulator arm of James Cameron’s submersible, the Deepsea Challenge is designed to be worn on the wrist. From the production of the case to that of the bracelet, each element of this 50 mm watch has been crafted with everyday use in mind. A watchmaking accomplishment made possible by using a grade 5 titanium alloy selected by Rolex: RLX titanium. 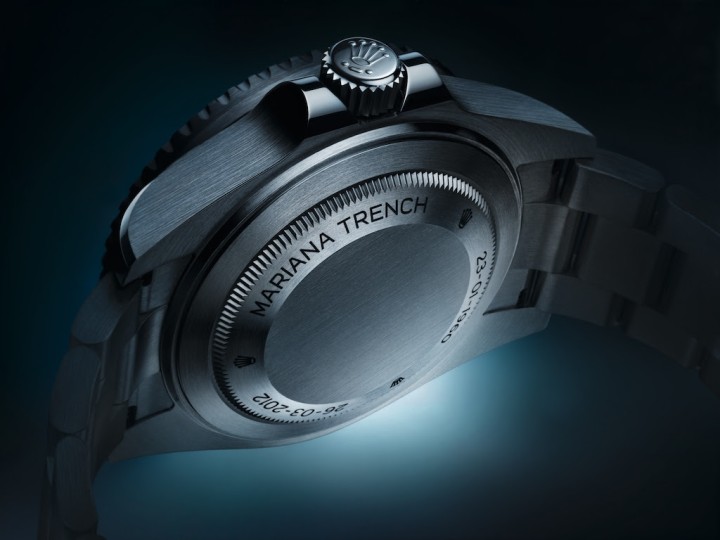 The engraved case back of the Oyster Perpetual Deepsea Challenge

A Homage to Explorers of the Abyss

The Deepsea Challenge is engraved with the words “Mariana Trench” as well as the dates “23-01-1960” and “26-03-2012” on the case back, in tribute to two historic dives into the Mariana Trench: that of oceanographer Jacques Piccard and U.S. Navy Lieutenant Don Walsh aboard the Trieste, in 1960, and James Cameron’s solo descent in DEEPSEA CHALLENGER, in 2012. Both expeditions took experimental Rolex watches with them. 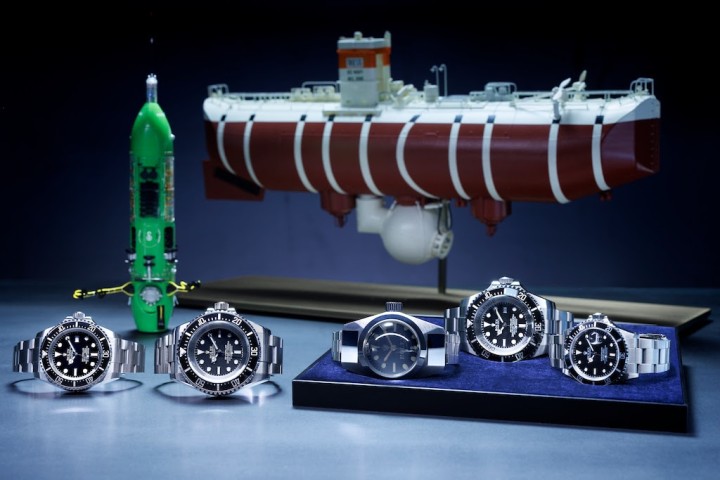 The design of the watch that accompanied James Cameron’s dive presented a sizeable challenge for the brand in a short production time. Tested to withstand a depth of 15,000 metres (49,200 feet) and 17 tonnes of pressure on the crystal, it was developed in only a few weeks, thanks to the extensive experience of the Rolex teams in the domain of deep-sea divers’ watches. Throughout the seven-hour dive, three hours of which were spent at the bottom filming and collecting samples, this experimental watch flawlessly withstood the tremendous pressure, as the 1960 watch had also done.

Today, the Deepsea Challenge marks a new milestone in the human and technical adventure that Rolex engineers and deep-sea explorers have shared for decades. 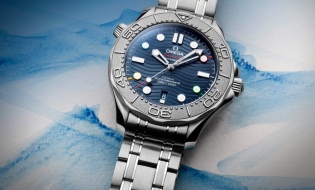