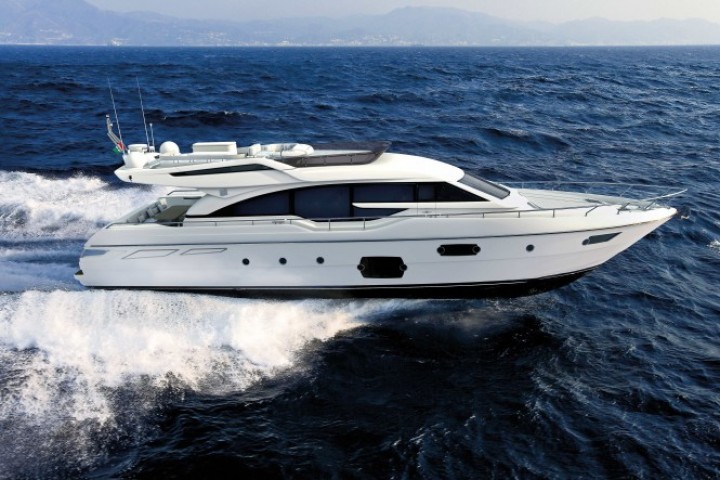 The Ferretti Group inaugurated the new nautical year exhibiting, at the 35th edition of the Festival International de la Plaisance in Cannes, a substantial fleet consisting of 24 boats, 5 of which in world premiere: Ferretti 870, Ferretti 690, Pershing 82', Riva 63', Virtus and Mochi Craft Dolphin 64 Cruiser.

In addition, the traditional Ferretti Group Meeting was held once again this year, at the Cannes Boat Show. This is the tenth edition, during which, in front of a large audience of employees, dealers, clients, suppliers and the media, the Founder and Honorary Chairman, Norberto Ferretti, the new President, Tan Xuguang, and the new CEO, Ferruccio Rossi, gave the first report on the nautical year and introduced the renewed corporate structure formed after the capital inflow in the Ferretti Group of Weichai, The Royal Bank of Scotland and the Strategic Value Partners, as well as the Group's objectives for the coming months.

In fact, thanks to important synergies, the sharing of resources and the new strategic partnership with Weichai, the Ferretti Group is aiming at reducing the costs and strengthening the marketing channel and the after-sales services, as well as focusing on a strategy to further expand on international and emerging markets, specifically the Asia Pacific region, a strategic area for the future growth of nautical business, where sales have increased by 30%. In addition, having found patrimonial and financial standing, the Ferretti Group will continue to support its plans to develop in Latin America, as well as on the traditional European and United States markets, on which the Group has steadily maintained its position, and where the results achieved allow it to look ahead, confident that it will maintain its leadership, especially as regards the North American area.

Throughout the nautical year, the Ferretti Group focused on the Asia Pacific Area, by participating in the main boat shows and nautical and luxury events in Thailand, China – in Hainan, Shanghai and Qingdao – in Singapore, in South Korea and Japan, as well as Australia and India.

Moreover, the Ferretti Group keeps registering good performance in Brasil, where it has been present for over 20 years, taking pride in its leading position in the Country, and where the Ferrettigroup Brasil was official inaugurated over a year ago. On the other hand, as regards the remaining part of Latin America, the Group is carrying out a series of marketing activities with the objective of further developing the key markets such as Mexico, Venezuela, Panama, Colombia and the Dominican Republic, as well as establishing new relations with other key areas where interest in luxury yachts is strongly increasing, namely Perù, Uruguay and Argentina.

Finally, as regards North America, the first market on an international scale for the nautical sector, the Ferretti Group has continued to further reinforce its presence and to expand its distributive network. In fact, to confirm this strategy, last May, the Group started moving the Bertram Yacht productive plants from the historical premises in Miami to the modern and strategic marina on Merritt Island, in Florida, USA. The new manufacturing plants will be in an area of almost 14,000 square metres and will be absolutely in the forefront with the objective of further innovating the Bertram boat range.

In addition, while sticking to its own strategy of constantly renewing the product, this year, at Cannes, the Group will present 5 models in world premiere

At the Festival de la Plaisance various other models will be exhibited, amongst which: Ferretti 720, Pershing 108' and Pershing 74'; Iseo, the elegant 27 inch of Riva, a brand which celebrated its 170th anniversary from its establishment in 2012; Ferretti Custom Line 100' and Navetta 33 Crescendo, from the semi-displacement range; Itama 45', Itama 62' and the flagship Itama 75'; as well as the M/Y Navetta 43 Sofico of CRN .

"I am very pleased that this occasion gave us the opportunity to illustrate the strategic objectives of our collaboration as well as to introduce the new corporate structure in the best possible manner", commented Tan Xuguang, President of the Weichai Group and President of the Ferretti Group. "The Ferretti Group is our ideal partner since its portfolio of prestigious international brands, its forefront technology and its capillary marketing network, we will be able to develop, in the coming years, a diffused "sea culture" also in the Asia Pacific Area, capable of becoming a new nautical sector. Thanks to the exceptional skills of Norberto Ferretti, of Ferruccio Rossi, and all the Top Management, experts in this sector, we are sure that we will increase the synergies of our Group, through the sharing resources and industrial integration, which will allow us to further consolidate our international leading position on the nautical and luxury market of the Ferretti Group".

"This year the Cannes Boat Show has an even greater significance for us since it has allowed us to introduce the "new" Ferretti Group to our stakeholders, in the light of the operation that took place with the Weichai Group. I strongly believe in the great importance of this strategic partnership that, despite of the situation that our Country is currently facing, has allowed us to safeguard more than 2,000 employees and the connected activities and services which are fundamental to the Italian economy, namely, that of boating. In fact, thanks to the existing synergy with Weichai and the recovery of patrimonial solidity, our Group will be able to maintain its leadership on the markets where it is already present and to further strengthen the emerging ones" – said Ferruccio Rossi, CEO of the Ferretti Group. "My objective is that of continuing the process that we embarked on in these years, carrying out our future plans which we can face with confidence and determination thanks to the new corporate structure, and I believe that this year, being present here with a fleet of 24 boats, 5 of which in world premiere, is undoubtedly a concrete indication of how to embark on this new challenge".