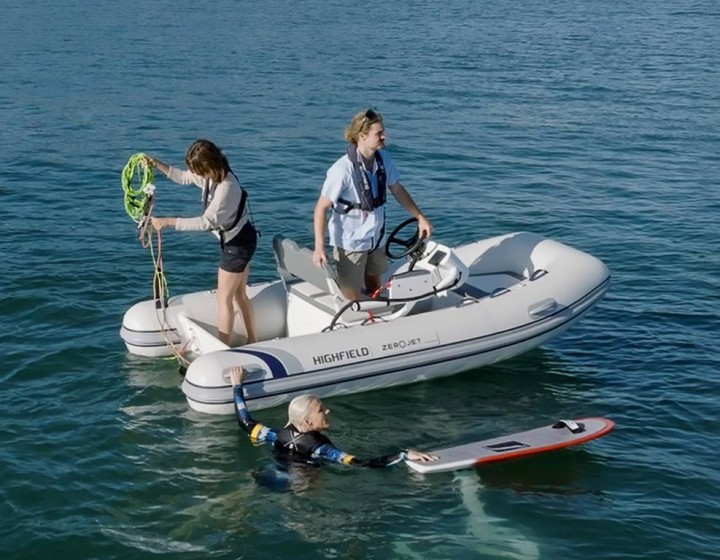 Join the Highfield Media Event on Tuesday 24th January in Hall 9 on booth C24 at 10am to meet the Highfield and ePropulsion teams.

Following the addition of a new outboard powered electric tender to the Highfield Boats range, announced just this week, the world’s largest aluminium RIB and tender manufacturer has today followed up by revealing a second and quite different electric model.

Making its debut at boot Düsseldorf when the exhibition opens tomorrow, 21st January, is the very first prototype of the brand new Highfield EJET330 tender. The model is powered by an electric jet propulsion system, developed by ZeroJet, the New Zealand-based electric jet systems specialist. By joining forces, the two companies are combining Highfield’s performance and strength with ZeroJet’s efficient and powerful electric system.

With no propeller to worry about, the EJET330 is safe for the water’s environment. It can be used in very shallow depths and is easily beached. Its low profile also makes it the perfect choice for compact storage on-board in tender garages.

At 3.36 metres long and 1.82 metres wide, and with a 15˚ deadrise, the tender weights just 225kg total including FCT console wheel steering and system. It features a 10.8kWh battery and 15kW of power, equivalent to 20hp. The boat can reach an impressive 25 knots maximum speed and can cover 12 miles at 14 knots.

“Highfield Boats is glad to extend its zero emission offering with the first electric jet propulsion system” comments Mathilde Delfour, Highfield’s European Managing Director, adding “Our partnership with ZeroJet is an important step into sustainable boating and the future of the marine industry.”

Neil Mans, ZeroJet CTO & Co-founder, comments “Partnering with Highfield, such a prominent boat builder, helps to accelerate the industry towards an electric future and provides customers with RIBs which are fun, safe and sustainable. ZeroJet invests heavily in research, design, development and testing, which allows us to design and build our electric jet systems to the high-quality standards required to operate reliably in the harsh marine environments and for maximum efficiency.”