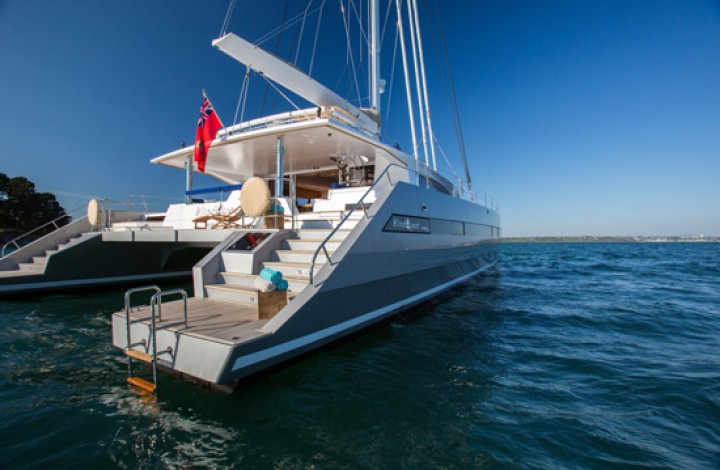 At the end of May 2014 JFA Yachts delivered WindQuest, the 1st Long Island 85, a 85-foot catamaran. This fast cruising catamaran is the first of a semi-custom "Long Island" series.

The hulls are aluminium-built while the deck is in composite material. They have been assembled by bonding. This method has been chosen with the naval architect Marc Lombard, to save weight when keeping aluminium hulls. This 85' catamaran offers spaces and performs like a 100'-110' monohull but with a reduced draught, more comfort and increased stability.

Fitted with a carbon mast and boom, her sail area is that of a high performance sailing yacht. The hydraulic winches installed on the flybridge are well-suited to manoeuvring with a reduced crew.

This yacht is equipped with 2 x 380HP engines and 2 x 27kW generators. At her economical speed, WindQuest motors at 8.6 knots for a fuel consumption of 21 l/h and can reach 12.9 knots at top speed. The 16' tender stowed aft of the cockpit is launched using an ingenious system comprising a retractable pole in the main boom. This is again a method of optimizing the weight without using a crane. Numerous deck lockers allow the stowing of fenders and mooring ropes as well as all the toys (inflatable SUP boards, snorkelling equipment, wakeboard...). On this boat, a large garage opening on the aft platform has been provided for stowing 4 bicycles. 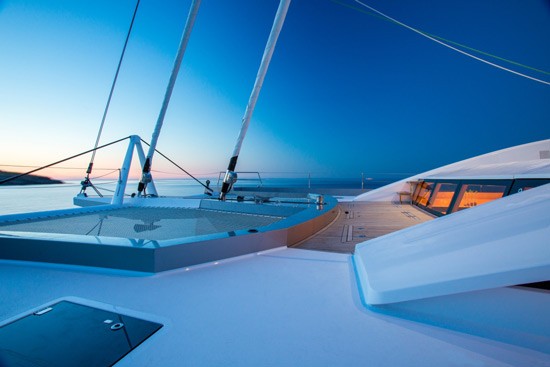 Outside, there is a large aft cockpit with a seating area on starboard and another one on port with a dining table, sunbeds either side, and a day head. On WindQuest the cockpit can be enclosed using removable panels of seethrough canvas.

The flybridge is the home of the outside helm and control winches, leaving room for a seating area and sunbeds.

Again in order to keep the weight of the boat down, teak decking has been used only forward of the owners' cabin and in the aft cockpit. 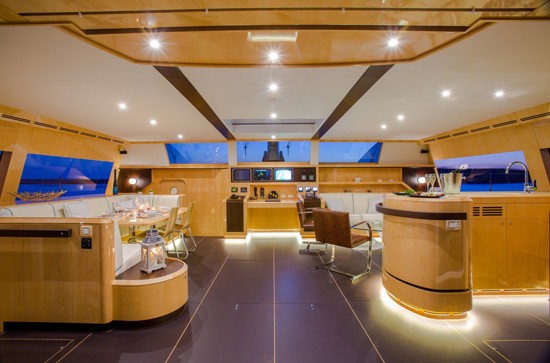 The cockpit is extended inside by a seating area with a bar on starboard and a dining-room on port. The helm station is set up against the bulkhead between the two indoor areas. The glass door aft, the large side portholes and the front windscreen create a very luminous space down below.

A few steps on port lead to the owners' cabin. The "must-have" on the Long Island 85! Stretching across the full beam of the yacht, this exceptionally large suite offers a superb view on 180°, never before seen on a sailing or even on a motor yacht of this size. A few more steps give access to a door opening on a private deck just forward of the owners' cabin.

This semi-custom range allows to answer owners' expectations.
On this model, the port hull houses the owners' bathroom and their office, which can be converted into a guest cabin while another guest cabin is aft. There is also a guest cabin in the starboard hull, as well as the crew quarter including the skipper's own cabin, the crew cabin, the galley and mess. The yacht offers a total of 124m² of floor space to accommodate 8 guests and 6 crews in extreme comfort. 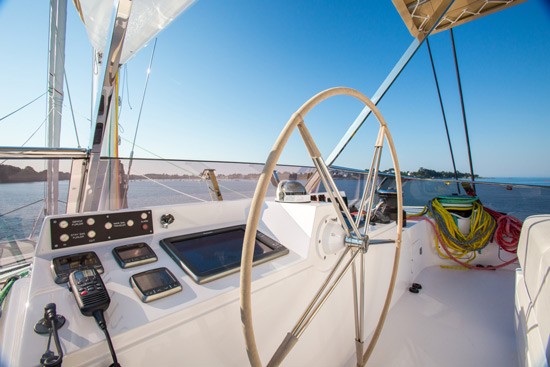 WindQuest had her maiden voyage in southern Brittany and will sail along the coasts of the English Channel and of the Atlantic between London and Lisbon before heading for the West Indies in October.