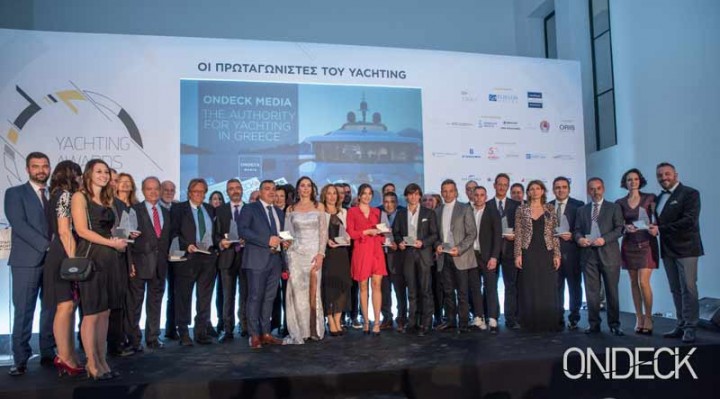 A glamorous night dedicated to the protagonists of yachting, sea tourism and leisure boating.

The first Yachting Awards 2019, organised by ONDECK Media at Zappeion Megaron on December 12, proved to be a remarkable success. In the most iconic building of Modern Greece, the protagonists of Yachting made their presence felt. At this major and unique event, which was honoured by esteemed members of the country's political and business scene, the honorary awards were a special tribute to the companies and people that contribute to the development and evolution of Sea Tourism, Leisure Boating and the Greek economy. They were a token of our appreciation to the people who have been the country's greatest ambassadors abroad for decades; to the new generation of entrepreneurs who keep going with a vision and with fresh ideas. 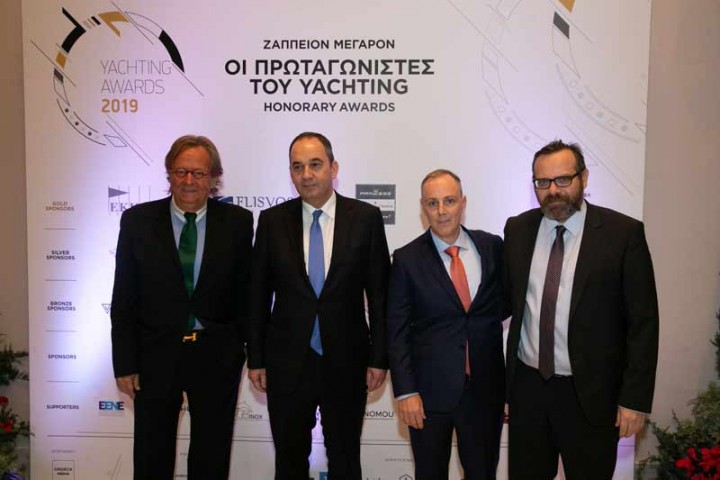 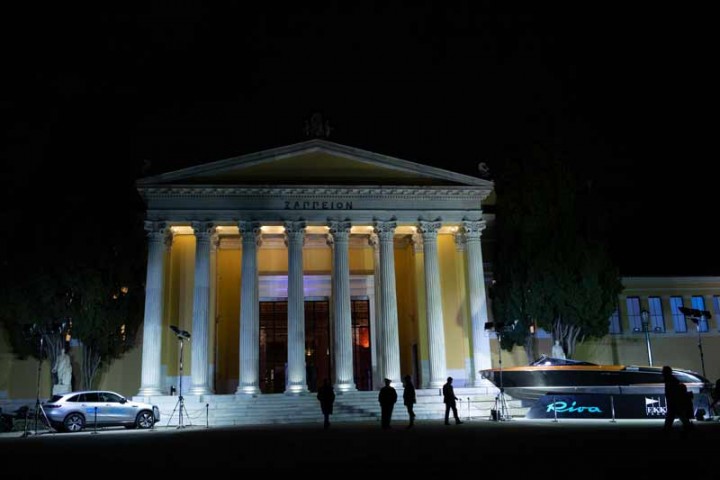 The event could not fail to include a token of boatbuilding prowess. Thus, the colonnade of Zappeion was adorned with the Italian Riva Aquariva Cento delivered by EKKA Yachts, the Gold Sponsor. A synonym for finesse, the boat was accompanied by the future of the automotive industry, the brand new electric Mercedes EQC.

The historic halls of Zappeion hosted the quintessence of technological advancements by the British Princess and the Greek American Marine, one of the most active companies in the yachting industry. A model of Princess R / 33 was placed in a prominent position. The impressive 450hp outboard Mercury engine by Zois Efstathiou SA -a company boasting a long history of 73 years and the exclusive dealership of Mercury Marine- literally invaded the Cocktail hall, inspired awe and amazement.

A remarkable and multi-layered industry like that of Leisure Boating and Sea Tourism was brought to the limelight; an industry that supports many different markets; a fertile platform for the promotion of our country worldwide.

With a view to supporting the initiative and acknowledging the goodwill of Yachting for our country's economy and tourism, the Minister of Shipping and Island Policy Mr. Ioannis Plakiotakis honoured the event and announced that next year sea tourism will look a lot different: “Thanks to its enchanting seas and its polynesia, Greece is considered the Mecca of sea tourism and that is what we should set as our target for next year: to place Greece at the centre of international yachting. For the benefit of an industry that contributes decisively to the production of wealth in Greece and can contribute even more. Yet, there is a need to reduce bureaucracy and simplify procedures, as well as change the mentality and exculpate the industry. The Ministry of Shipping is promoting a simple legislative framework. Open seas for all, but always based on the Greek and social established rights. We promote the cooperation with the pertinent Ministries of Tourism and Finance. We need to update the ship registry and, of course, we need more marinas. What we also need is qualified employees, therefore a well-thought-out upgrading of our maritime academies is essential. We need a new curriculum that will provide specialized executives for the yachting industry.
We want to let the healthy forces of sea tourism act freely. We also want to achieve added value for the sectors around sea tourism such as marinas, fuel supply and accommodation. I am convinced of the great potential of this industry. I believe that Greece must and can make it. We want to create several thousands of jobs in this sector too by investing in this national productive advantage. Next year we will change everything in Sea Tourism." 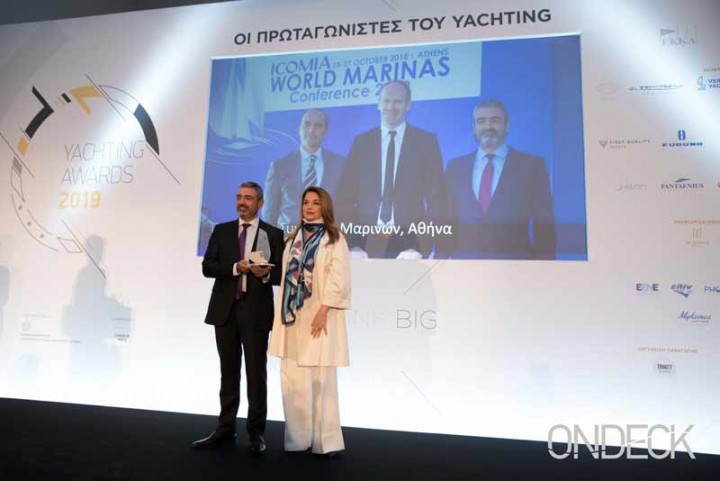 Also present was the President of GNTO Mrs Angela Gerekou, who stressed how important this industry is to Greek tourism. “Yachting is one of the most important tourism sectors in our country because it brings to Greece a substantial share of inbound tourism. GNTO is confident of the potential of this industry and aims to promote our country to all those who choose to visit our country by charter boat. This can be achieved by means of our participation in international fairs as well as the promotion of the beauty of our country in every possible way. "
"The event aims to promote and honour all those who contribute to the evolution and continuous development of sea tourism, a valuable sector of our economy. The Greek Yachting Scene is one of the most active and vital in the world. The goal of Ondeck Media is to continually promote this community both in Greece and abroad. The Yachting Awards add another dimension and goodwill. They are an extension of our ongoing efforts to bridge the world of yachting with the market as a whole; to pass the message that it is a multi-dimensional professional sector with lots of opportunities and endless possibilities,” said Gerasimos Gerolimatos, Director & Founder of Ondeck Media. 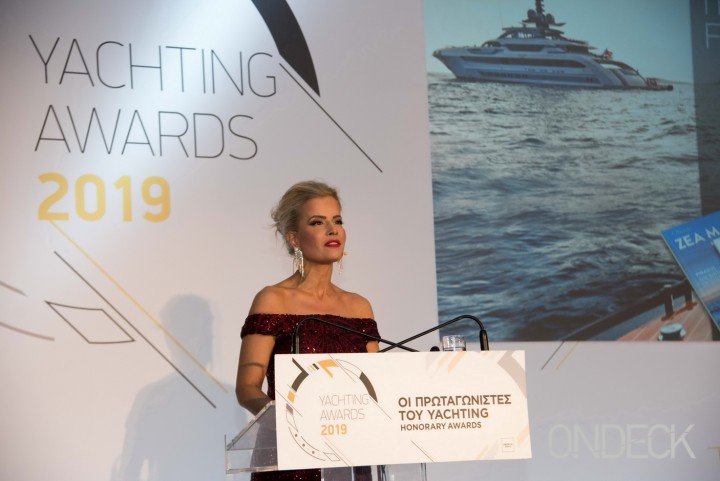 The event was presented by journalist Viki Chantzi 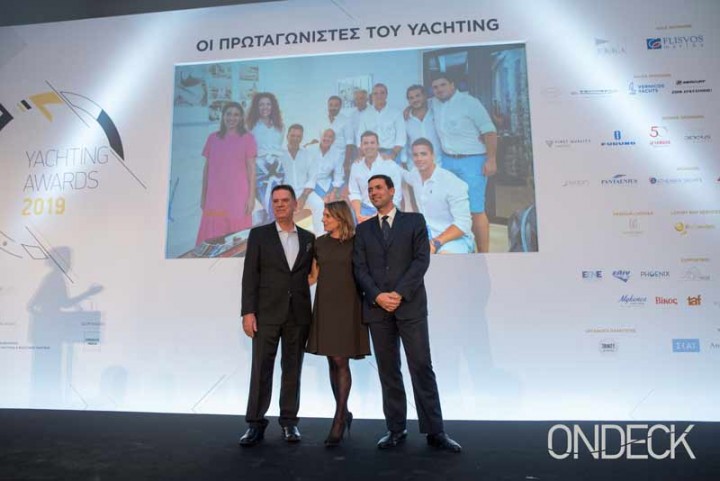 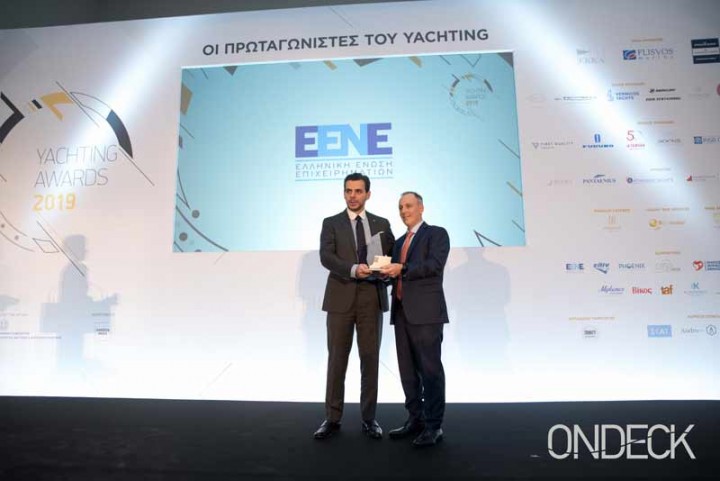 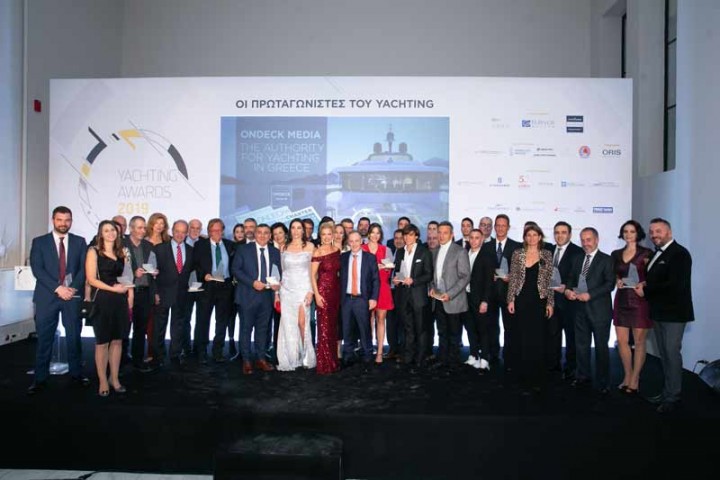 QUOTES
Antonis Stelliatos, President of HPYOA
“ONDECK Media has made a new start in yachting and deserves our most heartfelt congratulations. We all embarked together on this journey to rebuild yachting from scratch, simply because it's worth it. Our country is the biggest in the world as far as sea tourism is concerned and all the people of the industry must stay united to bring Greece to the heart of the world map. It is inconceivable to think that sea tourism will have no future in a country of 5,000 islands, 16,000km of coastline and residents who know better than anyone how to offer Greek hospitality to foreigners."

Stavros Katsikadis, President of the Greek Marinas Association
“For us the Yachting Awards event, in which we participated and received an honorary award from ONDECK Media, is an important initiative in the field of mass media and yachting. We believe that yachting will give us many reasons to be impressed in the near future. We heard the minister talk about changes and we wish all of the industry’s actors and decision makers good luck. As the President of the Association, I would like to say that the marinas will contribute as much as possible to the efforts and changes that are about to take place, aiming to help the yachting industry move forward."

Ioannis Kourounis, CEO of Istion Yachting, Secretary General of the Greek Yachting Association
“It is the first time an event is held to award and bring under the spotlight the people and the companies that are active in the yachting industry. At the moment, Greece as a yachting destination has not reached its full potential. Although it has the right climate and topography to secure a place at the heart of the world map of tourism, the administrative difficulties and the procrastination of our country with regard to entrepreneurship is what holds Greece back. We have hope; we can see rays of light; what we now need to see is the sun. "
The event is under the auspices of the Ministry of Shipping and Island Policy.
After the event, the guests enjoyed the fine creations of Begnis Catering and the unique cocktails of bartender.gr