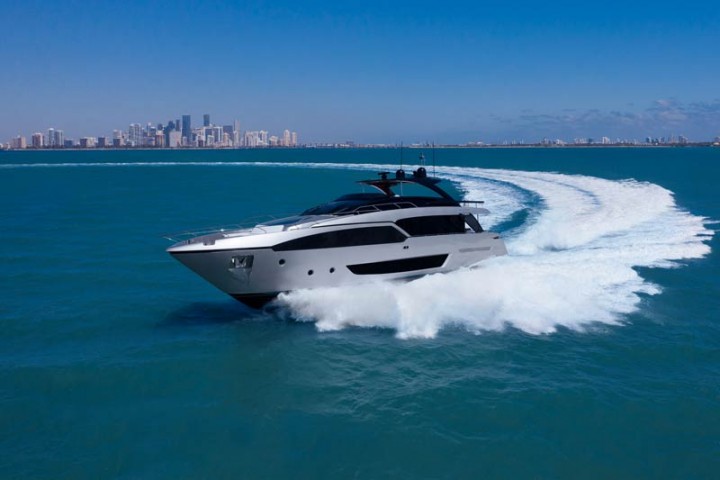 The Group deploys a fleet of 7 yachts, including Riva 90’ Argo and Pershing 8X at their American debut

Ferretti Group maintains its presence on the American continent participating in style in the Palm Beach International Boat Show, a landmark event for the Florida nautical season, scheduled from March 28th to 31st.

The Group, in collaboration with Allied Marine, its exclusive dealer for the United States east coast which will be present with its own stand, is going to exhibit a fleet of 7 magnificent yachts including, for the first time in the Americas, two aces of the seas: Pershing 8X, the new 'X generation' masterpiece which made its first appearance at the BOOT in Düsseldorf, and Riva 90' Argo, the last irresistible model from the brand's flybridge range. This one was presented in world preview on March 9th with a private event that brought together over two hundred guests in two of the most exclusive locations of the city, the wonderful hotel and the prestigious Zuma restaurant with, at the end, an amazing fireworks display.

The other boats in the Palm Beach International Yacht Show fleet are:
• Ferretti Yachts 780 and Ferretti Yachts 450
• Rivamare and 66' Ribelle for the Riva brand
• Pershing 9X

Ferretti Group continues at the Palm Beach International Boat Show its collaboration with prestigious international and Italian brands. La Scolca will offer an excellent selection of its wines; Pommery will offer a fine selection of champagne; Seabob, will be present with its limited edition seatoys made ad hoc for the Group's brands; Slam, is the official supplier of the Ferretti Group's crew uniforms. 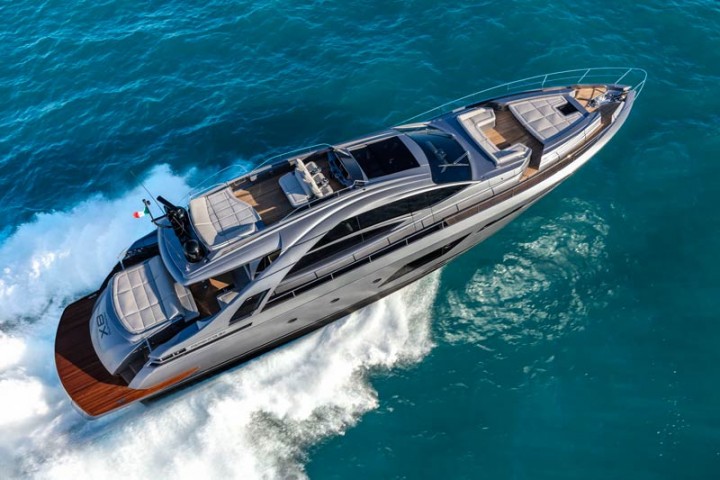 THE AMERICAN PREMIÈRE OF FERRETTI GROUP AT PALM BEACH:

RIVA 90’ ARGO
90’ Argo is the latest fantastic Riva flybridge. With a length of 28.49 metres (93’6’’) and a beam of 6.50 metres (21’4’’), the Riva 90’ Argo combines and enhances the strengths of its two Riva predecessors, the 100’ Corsaro and 110’ Dolcevita. Born from the partnership between Officina Italiana Design (the studio founded by designer Mauro Micheli together with Sergio Beretta) and the Ferretti Group’s Product Strategy Committee and Engineering Department, the new flybridge stands out for the large hull windows, the long, full-height glazed windows on the deck and the aft lateral structures with glass surfaces at the stern, which further enhance the aerodynamics of the profile.

PERSHING 8X
The new creation by Pershing stands out for its sporty, streamlined lines, combined with unsurpassed standards of quality and innovation. With a length of 25.55 metres and a beam of 5,86 metres, Pershing 8X is the result of the collaboration between the architect Fulvio De Simoni, Ferretti Group Strategic Product Committee and the Engineering Department. Made of carbon fiber, Pershing 8X is revolutionary from a stylistic-functional point of view as well as from a performance one. The sport-fly, in fact, guarantees not only lightness and increased speed, but also greater comfort on board, thanks to larger, more welcoming spaces