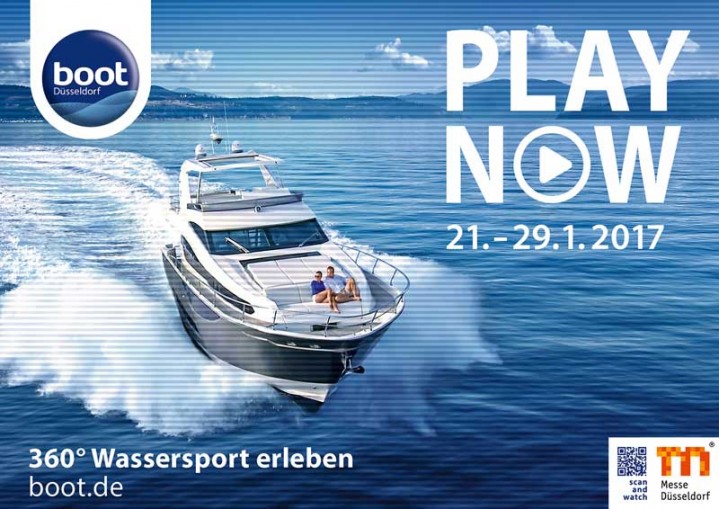 The sophisticated boot public can look forward to January next year: it is already becoming apparent in September that Hall 6 – which is devoted to superyachts – will be fully booked from 21. to 29. January 2017.

“Hall 6 will be a dream come true for lovers of large yachts. All the market leaders will be on board and we will be able to present the boats to our visitors in a dazzling way”, reports boot Director Petros Michelidakis.

Shipyards like Azimut/Ferretti and Sanlorenzo from Italy, the British companies Princess and Sunseeker as well as the French suppliers Jeanneau/Préstige and Bénéteau/Monte Carlo are the top brands on the world market. They are taking advantage of boot 2017 to present their flagship yachts to the well-heeled Düsseldorf public in Hall 6. Project Manager Arne von Heimendahl explains: “It is a tremendous success for us as boot organisers that Sanlorenzo will also be coming to Düsseldorf with a yacht again for the first time in years.” The long-established Italian company Sanlorenzo, which has been building its yachts in Liguria since 1958, will be exhibiting an SL 78 (almost 24 metres long) at boot 2017.

60 superyachts in total will be transforming Hall 6 into a hotbed of luxury, consisting as they do of the crème de la crème of the current boat market. In many cases, it is no easy assignment for exhibitors, trade fair organisers and transport companies, because extremely detailed plans need to be made in advance to move the boats to Düsseldorf in time for boot. Many of the yachts cannot be transported on land; use is instead made of the location of the exhibition site right next to the River Rhine – one of the most important waterways in Europe – to transport the yachts to Düsseldorf by river. Up to five boats are even loaded onto a pontoon in Rotterdam for the trip. Once they have arrived in Düsseldorf, the yachts are taken to the hall directly from the pontoon on a transporter. A very special ship’s crane is waiting in Düsseldorf for the boats that travel on the Rhine: “Big Willi” has been in untiring operation for boot since 1980. It carefully lifts the yachts out of the water and places them on the heavy-duty transporter that takes them to their temporary home in Hall 6. A pontoon with five yachts is expected again for boot 2017 too. Its planned date of arrival is currently 5. or 6. January 2017.

Exclusive yachtbuilding projects, models of luxury yachts: suppliers, designers and architects are demonstrating at the superyacht show in Hall 7a that anything goes in yachtbuilding. A new addition here is the trade fair event boot Interior, which is devoted to the equipment and furnishing of the megayachts purchased by demanding owners. Because there is increasingly strong demand for wellness areas fitted with state-of-the-art technology, quieter cabins and lavish materials for exclusive design features. Messe Düsseldorf and the superyacht magazine BOOTE EXKLUSIV that is published by Delius Klasing Verlag are the joint organisers of the equipment and furnishing presentation at boot 2017. Michelidakis: “Our aim is to continue the development of boot in the B2B field at the international level. We are taking a step in the right direction with the development of boot Interior.” Markus Kral, the editor-in-chief of BOOTE EXKLUSIV, adds: “Equipment and furnishing suppliers need a showcase of this kind. There is a wide range of different companies and specialists, from door handle manufacturers to surface finishing experts. I am enthusiastic about the concept of an interior event at boot and am delighted to have our brand involved in it.”

Anyone who is interested in finding exquisite materials, an elegant blazer or trendy winter boots after visiting the superyachts is welcome to look around the designer shops at the “blue motion lounge” in Hall 6. Classy shopping and exquisite dining are possible there in a distinguished setting.

Relocation of the German Superyacht Conference, which is organised by the publishing company Delius Klasing Verlag, from the River Elbe to the River Rhine is an excellent choice thanks to everything that is on show in Halls 6 and 7a. A selection of high-quality speakers underlines the exclusive image of the superyacht halls at boot. The Vice President Design at Daimler AG, Gorden Wagener, is, for example, holding the keynote address about the subject “Transfer of Design”. Wagener is considered to be one of the most prominent car designers in the world and has just transferred the Mercedes brand to the water with the development of the Arrow 460-Granturismo.

The Superyacht Conference is taking place at the Intercontinental Hotel in Düsseldorf on 25. January. It is already possible to register for it on the website www.superyacht-conference.com.