Arcadia Yachts has the pleasure to announce that all new entry model SHERPA will be officially on display for its world premiere during the 2016 edition of Boot Dusseldorf (23-31 January 2016).

The production of the entry level SHERPA is part of the recent extension of Arcadia Yachts’ GRP range. Together with the Arcadia 100 (presently under construction), the yard’s GRP family line is as follows: SHERPA - ARCADIA 85 - ARCADIA 100 - ARCADIA 115.

All models are built using dedicated molds, one for each model.

In addition, the yard will unveil details about production plans for full-displacement steel/aluminum yachts from 135' up to 150'.

ARCADIA SHERPA PRODUCTION UPDATES
Arcadia Sherpa hull #01 – to build on spec. Arcadia Sherpa will make her official debut in Dusseldorf Boot 2016 with an Open Deck superstructure/two cabin internal layout. The yacht will be built for Mediterranean cruising. This specific version/layout is actually the most requested. Launch of the first Arcadia Sherpa unit is scheduled on December 15th.

Lamination started in August 2015 and ended late in September 2015. The very first glance of the completed hull and superstructure was possible in the beginning of October when moved from the fiberglass department to outfitting. The yacht will be moved out of the shed to be prepared for launch. Her first “splash on the water” will be after onshore testing, sea trials and all the necessary Class Endurance runs have taken place. All production stages will be carried out in Arcadia’s facilities. Yacht will start cruising towards Tyrrhenian Sea (Genoa) immediately after the launch. Loading on a vessel with destination Rotterdam, is scheduled for the second half of December 2015. Arcadia Sherpa will experience Rhine navigation, then will be lifted and placed on cradle in Hall N°6 at Dusseldorf Boot 2016 for exhibition and official presentation to clients, brokerage community, industry and international media.

Arcadia Sherpa hull #02 - Lamination of Sherpa hull #2 started in September 2015 and scheduled to be completed within first decade of December 2015. Launch is scheduled for March 2016. At this time there are several and serious negotiations on this unit form different countries.

SHERPA is a “forward thinking design yacht”. A 16.8m yacht with an exceptional 5.50m beam. A compact size with all the key features of larger yachts in the same range: exterior/interior spaces, a high-performance and efficient hull, well lit and modern interiors. SHERPA can be favorably compared with much larger yachts (65 ft) by its LWL (15.53m) and beam (5.52m) as no extra lengths are considered (bathing platforms and bow rake. The efficient length to beam ratio of the specific NPL hull also contributes to an upgraded yacht size for SHERPA. The incredible volume of the yacht is certainly a winning factor for potential clients of this size and range.

VERSATILITY AND LAY-OUT
One of the primary goals when designing the Sherpa was versatility. The yard offers the following configurations according to use: day cruiser, shadow boat, mini-yacht or fisherman.

- Two cabin version: With this variation, in addition to the spacious owner's suite with walk-in closet and access to the full beam width bathroom, the second cabin has a full two meter headroom throughout, two side by side berths and a practical bathroom with separate shower for guests.

- Three cabin version: The three cabin version of the new Arcadia model has the owner's king size berth forward, with a spacious bathroom and separate shower. Both guest cabins have two meter headroom throughout and a shared bathroom with access from the corridor. Sherpa also offers the possibility of a crew cabin. 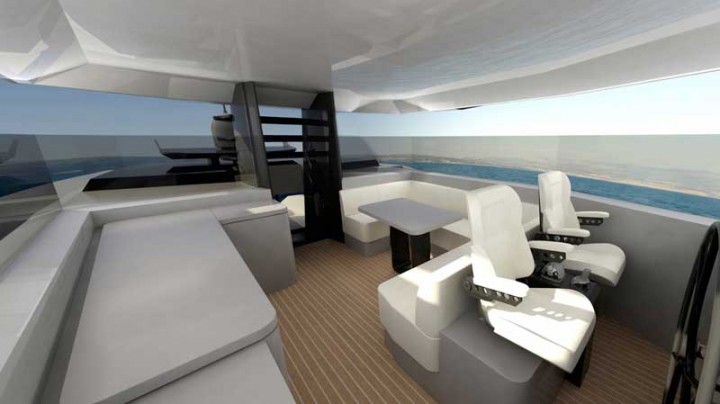 AN INNOVATIVE CONVERTIBLE SPORT FLYING BRIDGE
Arcadia SHERPA features a new concept in Sport flying-bridges: the “Easy-to-close” flying-bridge that converts into a closed deck, completely protected by side windows that can be raised and lowered electrically, just as in automobiles.

The whole upper-deck area, since it is air-conditioned, becomes much more flexible and functional in any weather condition: in very hot climes or in bad weather when closed, or left open to the air as per any traditional flying-bridge.

WHY SHERPA?
Besides the flexible layouts, SHERPA offers an unexpected storage space of 140 square meters (247 cubic feet) below the main deck. A flush main-deck allows all storage to take place belowdecks, leaving the entire area free for other uses. This storage space has direct and easy access, with a useful internal height of 125cm. Its storage lockers may easily be prepared for the most diverse uses: the usual mooring lines and fenders, water toys, fishing and diving equipment, water sport gear (kite-surf, windsurf, kayak), or for optional placement of the Seakeeper stabilizer in the central section. This is why the yacht is named after the legendary Himalayan guides capable of carrying extraordinary loads: SHERPA.

NPL HULL AND PERFORMANCE
SHERPA can be used both for day cruising or for very long-range cruising (ocean fishing and sightseeing). Thanks to her high performance semi-displacement NPL hull - which offers significant savings in fuel consumption – and together with the additional fuel tank compartment, extended cruising capabilities are guaranteed. The NPL hull type is a specific hull named after the National Physical Laboratory of England, where tests were conducted to determine the best ratio of length to beam in terms of hydrodynamic efficiency. This advanced hull, together with lightweight superstructures, allow very satisfying performance with low-power engines.

The new Arcadia SHERPA - with Volvo Penta IPS 600 engines – has a top speed of about 25 knots, with a cruising speed of 20 knots. At 20 knots, fuel consumption is apx. 97 liters per hour, and at 12 knots (top displacement speed), this decreases to about 43 liters per hour. Volvo IPS propulsion guarantees proven maneuverability and outstanding silence. Cruising range is also favored by low generator usage thanks to the 3.5KW of electrical energy supplied by the solar panels that cover almost the entire superstructure. 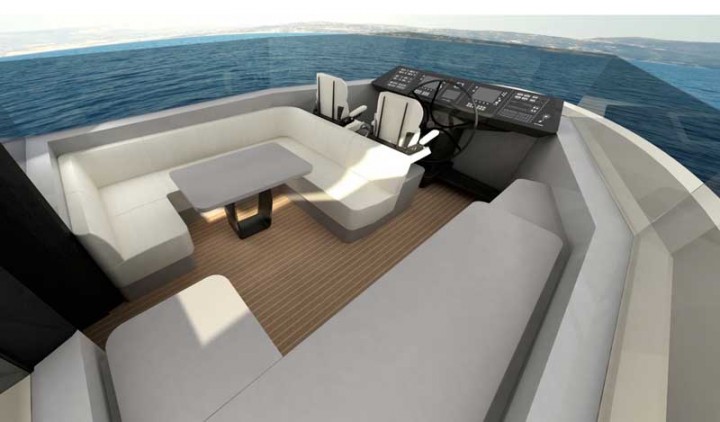 ADDITIONAL ENERGY FROM SOLAR PANELS
Solar cells of latest generation are integrated between the external and internal surfaces of double-glazed panels fitted on top of the largest part of the superstructure.