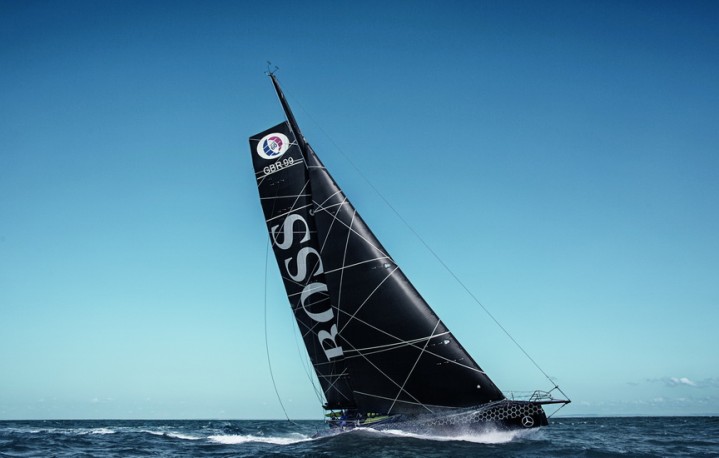 HUGO BOSS has announced the launch of its racing yacht – the latest project from their ongoing partnership with Alex Thomson Racing. The boat, which has been two years in the making, is 5 percent lighter than the team’s previous racing yachts and includes a number of totally unique design features.

The building took place at Green Marine in Southampton, UK, and had a team of 30 working full-time on the project. World-renowned industrial designer, Konstantin Grcic, worked with naval architects VPLP/Verdier to create the yacht’s unique aesthetic. Both functionality and speed are key design aspects; the honeycomb patterned deck is built from light, strong Nomex, clean carbon surfaces optimize strength and weight. The first entirely black sailing yacht in the world was made possible by functional pigments with heat-reflecting properties developed by BASF. All this mirrors the core values of the BOSS brand – the unique combination of innovation, craftsmanship and engineering. Speaking about the launch of the new yacht, Gerd von Podewils, Senior Vice President Global Communication at HUGO BOSS said, “The new ‘HUGO BOSS’ is a perfect illustration of technology and innovation combined with outstanding design.

We are very grateful to Konstantin for his support on this, which led to such an exceptional result. Having established valuable, successful partnerships with both Mercedes-Benz and the Alex Thomson Racing Team, we’re delighted we had the chance to join forces and work on this project together.”

Speaking about the launch of his new boat, Alex Thomson, who has been sponsored by HUGO BOSS since 2003, said: “We are all very excited about the new HUGO BOSS. The attention to detail that has gone in to every stage of the design and build has been taken to the next level and if she’s as fast she looks we will be in good shape.’’

The new ‘HUGO BOSS’ will make its competition debut when Thomson takes part in this year’s Transat Jacques Vabre – a 5000 nautical mile race from France to Brazil, which starts on October 25, 2015. It marks the team’s run up to one of sport’s greatest challenges; the solo, unassisted round-the-world yacht race, the Vendée Globe, which forms part of the Oceans World Masters Championship.