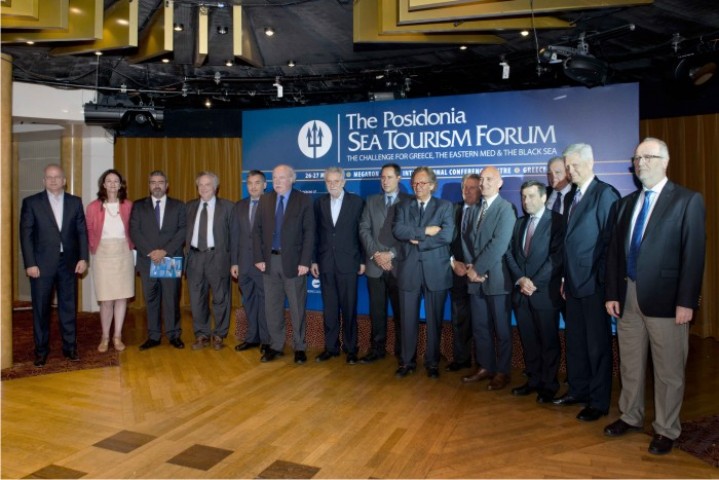 Sea tourism in Greece and Turkey is set for a significant upturn over the next two seasons as the region’s most profitable cruise destinations stand to benefit from an anticipated redeployment of part of the world’s cruise capacity back to the Eastern Mediterranean, following a period of capacity relocation compounded by the Mid East’s geopolitical tensions and the Eurozone’s financial crisis.

Discussions on the positive impact on Greece’s and the region’s economies from more robust cruising & yachting sectors will take centre stage at next week’s 3rd Posidonia Sea Tourism Forum, to be held from May 26th – 27th at the Megaron Athens International Conference Centre. More than 800 delegates from cruise companies, ports and destinations, ship suppliers, yacht operators and charterers, marina developers, local authorities and government bodies will address challenges and opportunities affecting the future of sea tourism in Greece and the wider region.

“As geopolitical tensions hopefully subside and their impact is waning, shore excursion yields of the culturally and historically rich and diverse Eastern Mediterranean are set to soar with the cruise giants eyeing a higher penetration of destinations across a region which boasts the highest port density in the world,” said Theodore Vokos, Executive Director, Posidonia Exhibitions S.A., the organiser of the event.

“For Greece in particular, the financial contribution of Sea Tourism, spearheaded by the cruise sector, can be as high as Euro 1bn annually according to study made by the Hellenic Chamber of Shipping. Sea Tourism has the potential to create 40,000 new direct and indirect jobs in the foreseeable future, most of them to cater for the needs of cruise tourism, as in 2015 Greece expects more than 5 million cruise passenger calls. Yachting also contributes significant employment opportunities as the cumulative number of jobs created in the local economy is equivalent to the number of marina berths available. In Barcelona for example, for every 100 berths the local economy generates 4.4 jobs in marinas and 40 jobs in other related sectors.”
A further 8.7 million Greek and international tourists use the services of ferry companies connecting the mainland with the islands, thereby further stimulating tourism, an industry which contributes 260,000 jobs and 6.5 per cent of the country’s GDP.

Tourism, of which sea tourism is an integral part, is the lifeblood of the Greek economy according to Alexandros Lamnides, General Manager of Greek Tourism Confederation, one of the event’s longstanding supporters. He said: “2015 will be the year we will be investing more than ever in our people, including our employees, owners of small businesses, or merchants, all of whom can only gain when tourism performs well. This is the year we want to highlight Greece's best-kept secrets by working in close partnerships with local communities to safeguard our truly unique tourism product. It's the year when we will work harder than ever to ensure Greek tourism maintains the place it so rightly deserves. We are certain that Posidonia Sea Tourism Forum will continue to safeguard and promote sea tourism in Greece.”

The President of the Association of Passenger Shipping Companies, Michael Sakellis, highlighted the importance of the ferry sector for Greece's tourism product and said: “The Posidonia Sea Tourism Forum is a great opportunity to inform and be informed of the current challenges, trends and developments in order to recommend and evaluate solutions and ideas designed to further improve the prospects of Greece’s tourism.”
The Forum will also host a number of high profile seminars, presentations and industry meetings including the Executive Committee Meeting of the Cruise Lines International Association – CLIA Europe, which will table issues pertaining to the growth potential for the cruise industry, the projected increase of regional deployment for 2016 and the current barriers to growth for both cruise calls and homeporting in Greece.

Kerry Anastassiadis, CEO Celestyal Cruises and member of the CLIA Europe Executive Committee, said: "The cruise industry in Greece has experienced continuous growth in recent years, ranking third in passenger numbers throughout Europe, and in 2015 the cruise industry is expected to give the Greek tourism industry a significant boost. Greece, with its unparalleled beauty, fascinating history and cultural wealth, has the potential to grow its tourism industry and become a leading global destination. Celestyal Cruises is the only home-porting Greek cruise line, with 627 calls to the ports of Greece. We believe that for Greece to attract more international cruise operators, it is of extreme importance that the cruise industry is made a strategic priority: with proper organization and handling, cruising in Greece can be established globally. The benefit of this for the Greek economy would be tremendous, as the cruise industry generates revenue for local economies and stimulates the shipping industry. Since cruising is one of the world’s fastest-growing tourism products, it can provide a boon to our national economy, provided we examine and manage it with care, creativity and vision. "

A key stakeholder on the issue of homeporting is MedCruise, the association representing port members from 20 different countries of the Mediterranean and Adjoining Seas. MedCruise Secretary General, Athanasios Pallis, said: “Posidonia Sea Tourism Forum is a key networking and relationship building event for cruise ports, cruise lines and destinations as it reinforces collaboration that ultimately increases the value of the region’s port services. We see this as a first class opportunity to face the challenges and produce concrete results on how best to develop our activities in order to bring more cruise passengers to the Med and the wider region.”

Other than being an ideal platform for the traditional industry players, Posidonia Sea Tourism Forum is also a facilitator for interaction and collaboration between Greece and the fast rising East which will be represented at the event by a number of Asian organizations, including some of China’s upcoming destinations. In this respect, the Embassy of the People’s Republic of China in the Hellenic Republic is organizing the ‘China-Greece Tourism Cooperation Seminar & Investment Promotion for the Cruise and Yacht Industries of Hainan Province’. Senior government officials from Hainan Province and major corporations, as well as representatives from Shanghai and Tianjin, will participate in a seminar aiming at forging relationships conducive to future collaboration opportunities. Three senior business delegations from China representing port development companies, tourism authorities, economic development zones, industrial parks and airports amongst others, will participate in the Forum and will meet with Greek and international sea tourism professionals to develop joint projects and exchange know-how.

Another key highlight of this year’s Forum is the ‘European F&B Cruise Ship Supply Industry Workshop’, which aims to introduce and familiarize local exporters of quality F&B products, processing manufacturers, wineries and gastronomic product specialists to the workings of the cruise sector. F&B supplies for cruise ships is a multi-million Euro export sector and can contribute significant benefits to the national and local economies.