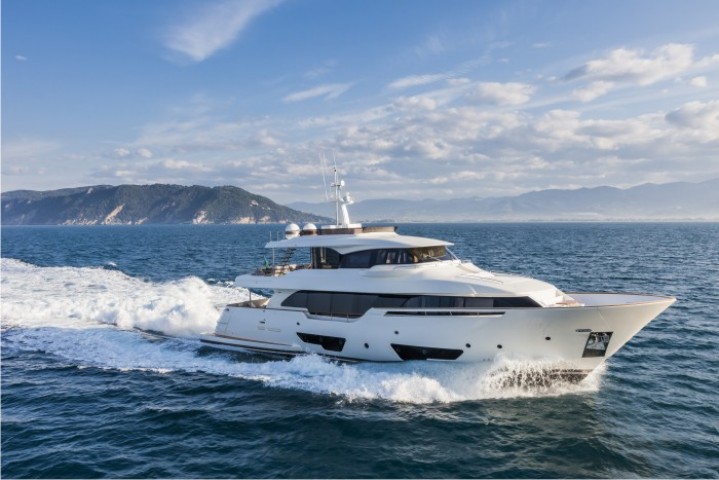 Navetta 28 continues its international success with a prestigious Award. The maxi-yacht of the semi-displacement Custom Line won the Adriatic Boat of the Year 2015 award in the Motor Yacht over 51 feet category.

The prize was conferred during the 20th edition of Internautica, one of the most renowned European boat shows, held in Marina di Portoroz, Slovenia. Navetta 28, “sister” of Navetta 33 Crescendo, debuted last September at the “Cannes Yachting Festival 2014” and immediately earned unanimous acclaim from both media and the public, leading to the launch in recent weeks of the second unit, entirely customized by its Owner.

The Adriatic Boat of the Year 2015 awards ceremony brought another big success for the whole Ferretti Group, that earned 2nd place in the same category with the Pershing 70. The dual accomplishment certifies the absolute excellence of all the Group’s brands over 50 feet in length.

The new semi-displacement maxi-yacht by the brand belonging to the Ferretti Group - entirely built in the production facility in Mondolfo (PU, Italy) - features a host of new elements, recognizable from the unmistakable outer profile and the panoramic dining area, with a circular sliding glazed door system that enables a very flexible use of the upper deck.

The broad sun-deck is a comfortable private deck that can be fitted with a Jacuzzi and an awning upon request. On the main deck, a continuous glazing stretches from bow to stern, and the lower deck features four innovative hull windows at the height of the guest cabins, installed for the first
time on this model.

The most absolute innovation is found in the aft area, where the Dual Mode Transom (DMT), a Ferretti Group patent, makes it possible to combine into one single system a floodable garage, a bathing platform, and a beach club of dimensions unprecedented on any other models of this size.

Further innovation can be seen in the audio/video equipment, thanks to the “VOTIS” system (Videoworks One Touch Infotainment System), which makes it possible to use an iPad to control theon-board entertainment system, thereby replacing all the remote controls of the various A/V equipment in the main deck salon with one single device. The control system can also be extended to the other areas of the yacht.

Performance wise, the Navetta 28 is fitted with two MAN V8 1200 mhp engines that allow it to reach a maximum speed of 16 knots and a cruising speed of 13.5 knots. The yacht is equipped as a standard with electro-hydraulic stabilizing fins with “underway” function and gyroscopic stabilizers.