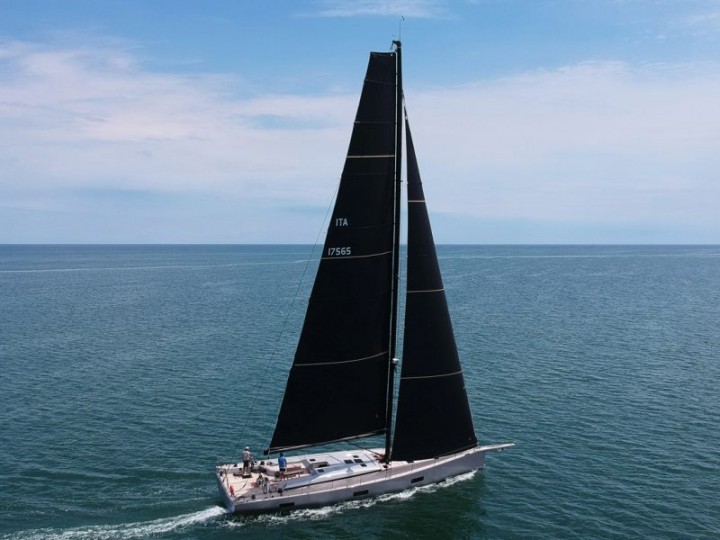 A golden autumn has brought a hugely successful close to the first full year of competition for the new Scuderia 65 racer-cruiser.

On the racecourse, the full carbon yacht has repeatedly shown her pace, with line honours and podium finishes from the Adriatic to the Aegean. And she has also won a major design gong ashore. 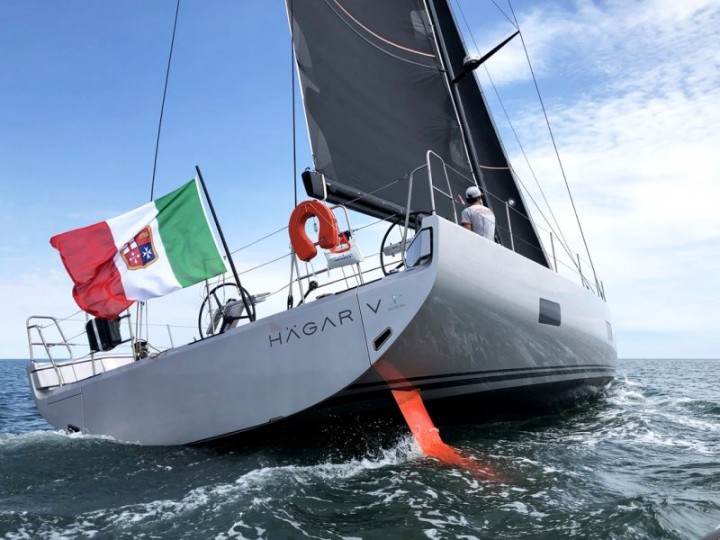 From the pen of wunderkind Harry Miesbauer, the Scuderia 65 was always optimised for form stability and blistering offshore performance. She is simple to sail short-handed, while a powerful rig and the option of a lifting keel give her thrilling pace in strong winds.

“Together with the owner, I opted for a more powerful hull shape,” says Miesbauer. “We knew it would give us an edge when it is breezy, and in some conditions we are even faster than our VPP velocity predictions. When I was on board we did 21 knots on a broad reach in 20 knots of wind and the two-man delivery crew reported a top speed of 28.7 knots.” 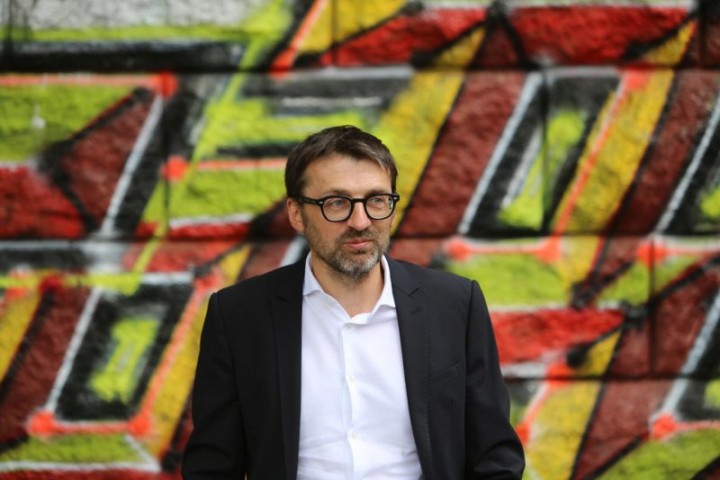 Built for an owner who loves offshore racing, the new yacht has been kept busy this year. From her base in Chioggia in the Adriatic, she has undertaken numerous regattas, including the dramatic Aegean 600 endurance race that weaves around the Greek islands. The season culminated in October with Cinquanta and the Barcolana race. 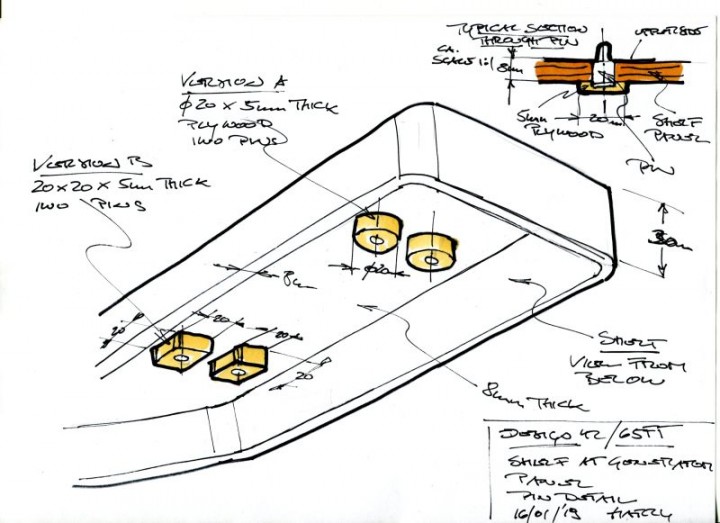 Results have been superlative. In the highly competitive local races organised by the Circolo Nautico Port Santa Margherita (CNSM), the boat twice took line honours and was once beaten only by a 76-footer. In the Aegean 600, she was the third boat home and out of all 1,700 boats competing in the Barcolana, she came 14th. It has left the experienced owner with a big smile on his face. “After all the miles I did in this season, I would not change anything on the boat,” he says. 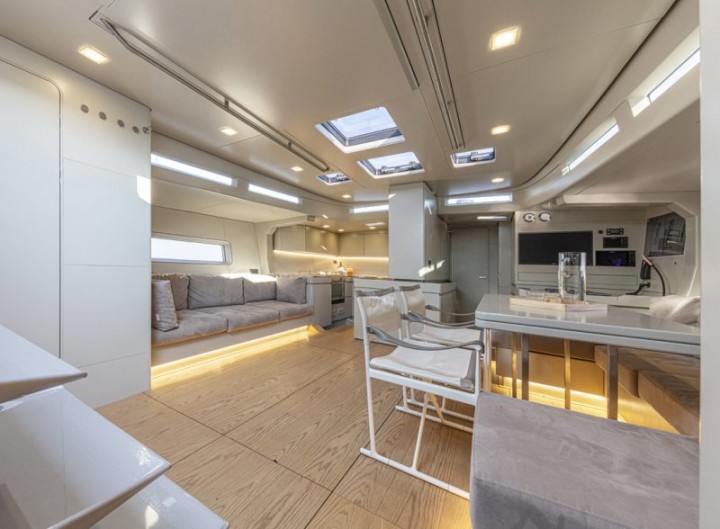 But performance is just one element of this impressive yacht. The sleek hull lines and clean deck are perfectly allied with an elegant and minimal interior. At once practical for sail handling while racing and architectural in its styling, this is an interior that genuinely succeeds at combining form and function. 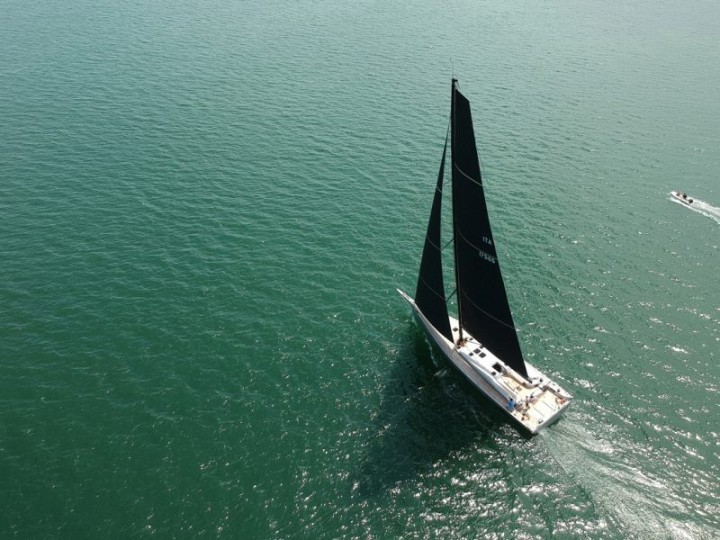 No wonder, then, that the boat scooped a highly sought-after A’ Design Award this year from an international jury of design experts who recognised its aesthetic qualities and sailing abilities. “Winning the yacht and marine vessel category means a lot to me, and it is satisfying to ‘close the book’ on a long story,” says Miesbauer. “Also, because it is awarded by a jury which consists of product and automotive designers, architects and design journalists.” 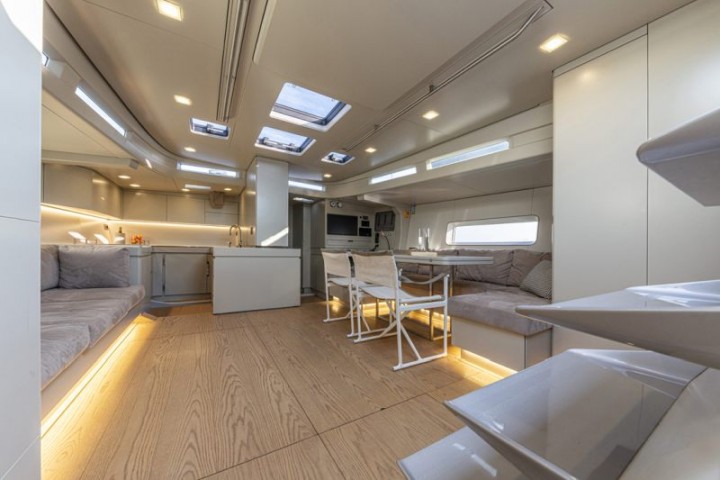 Certainly, there are plenty of unique design features on the Scuderia 65, most visibly the low-profile coachroof with a wrap-around window. “It is something nobody else does on sailing yachts,” says Miesbauer. “It is an aesthetic trick to stretch the appearance and to give it a more elegant look.”

He uses a similar trick to play with perspective in the saloon of the boat. If you stand by the keel casing looking aft, your eye sees a companionway stretching up to the cockpit, lengthened by the way the steps become narrower as they go up.

Another point of focus was the controls around the twin helm consoles. The owner wanted hydraulic controls at the side of the console, so Miesbauer sculpted the main surface round the corner of the pedestal and down to take the buttons. The throttle is recessed on the top of the console, where it is less obtrusive. 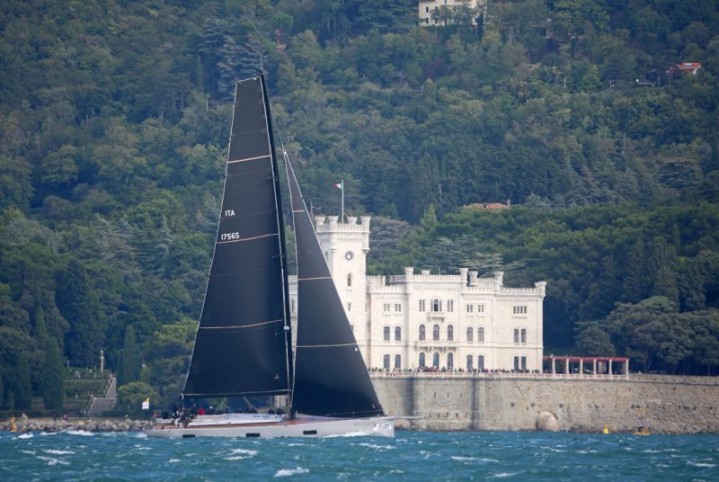 In contrast to many fast IRC boats out there, the Scuderia 65 has been designed to provide a comfortable base for cruising as well. The enclosed U-shaped galley to port is well equipped and spacious, and there are three cabins. The master cabin forward is a double with a dedicated sofa area and ensuite shower room. Two flexible twin V-berths aft also have their own shower rooms, all in lightweight moulded composite. 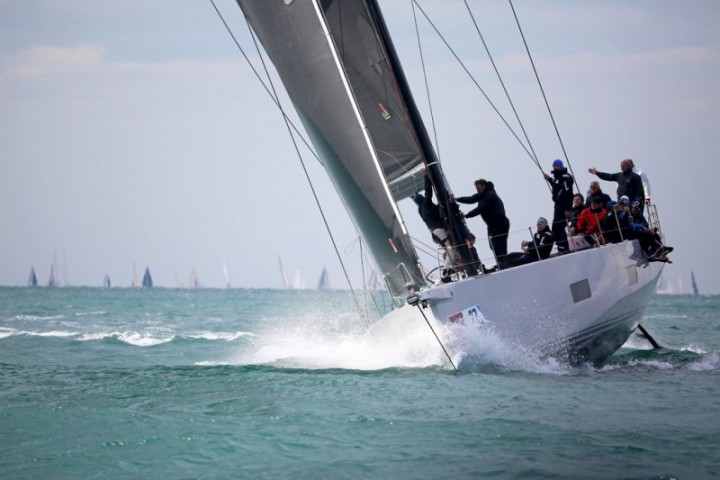 Labour-saving appliances like washing machines and ice-makers are fitted in a modular fashion, so as to be easily removable for racing. “It all goes back to a first conversation I had with the skipper and the owner during the Middle Sea Race a few years back,” says Miesbauer. “Together, we came up with a concept for a larger boat, fast offshore and with sexy lines, but where there was still a place for family cruising.” 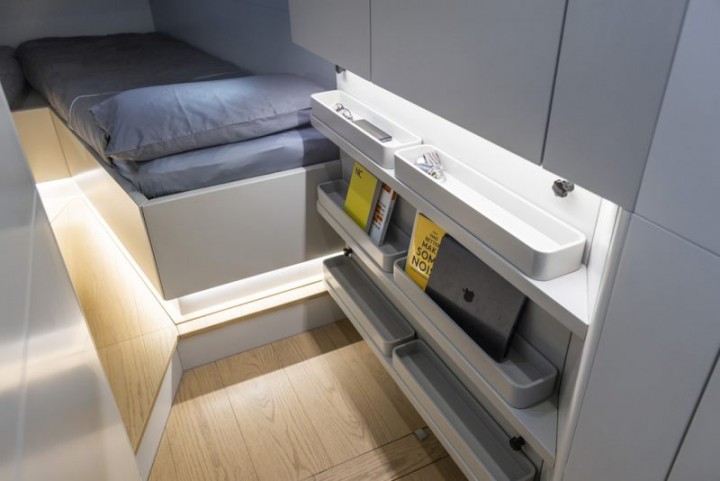 “I believe that we have got the balance exactly right, as this is a boat that you would happily cross the Atlantic in. And despite her performance, she is not a complicated yacht. She is simple to handle two-up, and wherever we had the choice between an elaborate technical solution and something more straightforward, we have kept it simple.” 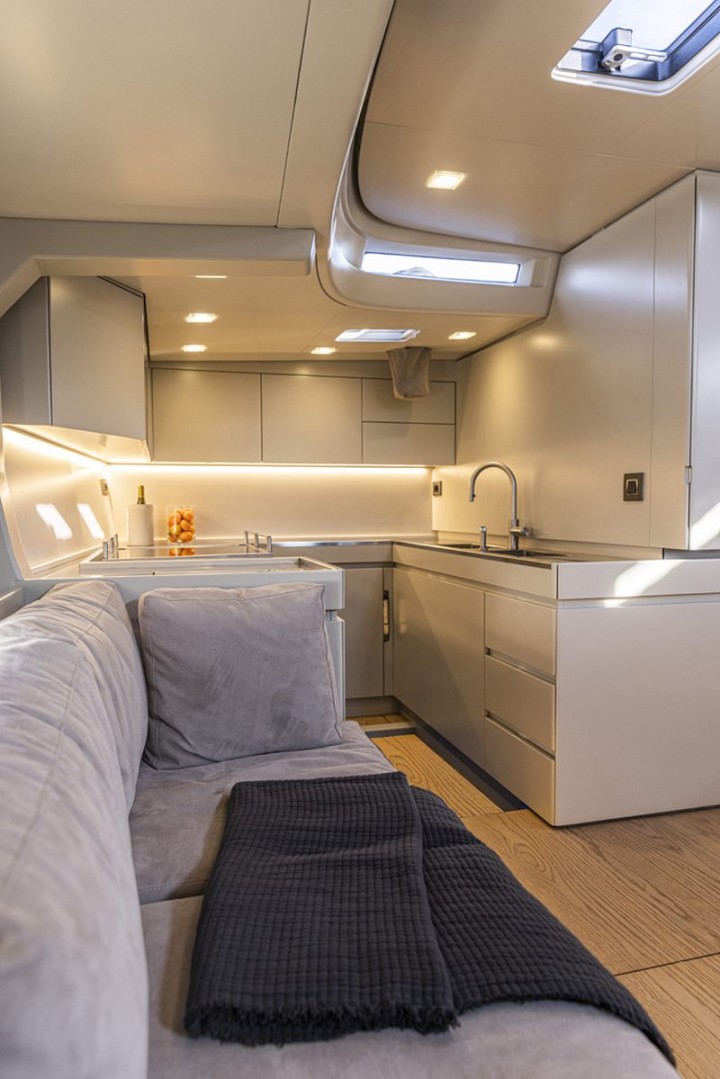 Miesbauer is hoping that more of these boats will be built now she has proved her potential against her peers. With looks that refuse to bow to the trends of the day and an award-winning design, the Scuderia 65 will be as fresh in five years as she is today. 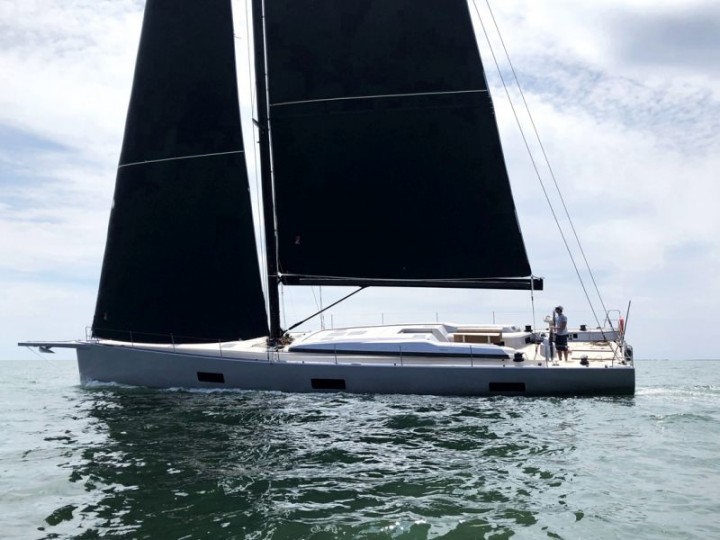 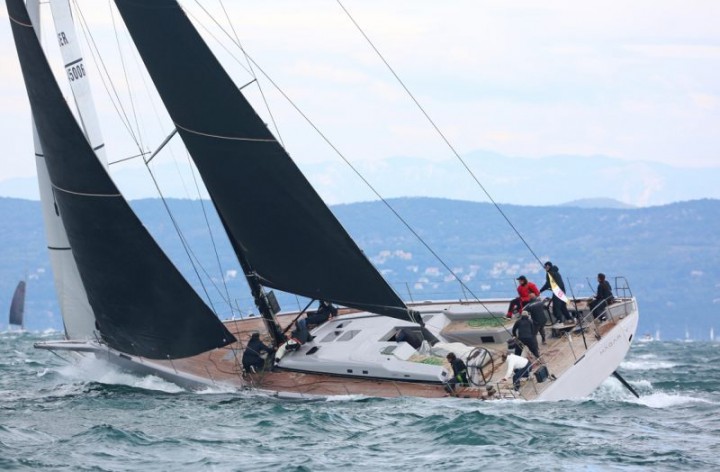 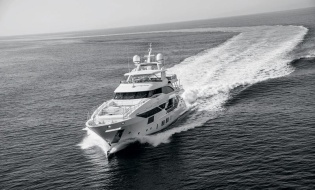 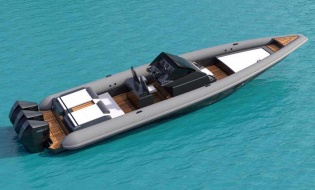