Having impressed Brits at Cowes Week during the summer, Thomas Jundt’s wing-masted foiler is headed to Paris where it will be on display to 250,000 visitors at next week’s boat show.

Mirabaud LX’s 2011 season is to conclude at the Paris Boat Show, Porte de Versaille, from the 3-11 December where it will be on display to 250,000 boating enthusiasts as a special guest.

Last summer, Mirabaud LX made its mark in the UK as one of the main attractions at Cowes Week; the sight of it foiling around the Solent at high speed, powered by a wing mast, created quite a stir.

Since then Thomas Jundt, the man behind the experimental boat, has come to some conclusions: “Our wing is fantastic, but too small,” he said. “Our goal for next season is to develop a bigger wing for light to medium conditions so that we can pursue some new records.”

“We must fly in order to go faster,” said Thomas Jundt. “This year we established that our wing was fast in 10 to 15 knots, the balance of the boat was very good and we could point well. Our new configuration for 2012 will allow us to broaden our range and better our average performance.”

At this year’s Bol d’Or Mirabaud, Thomas Jundt and his crew, Antoine Ravonel and Eric Gobet, suffered in the light conditions at the beginning of the race. Off Hermance, the turbo kicked in and by Evian, they had reeled in the fleet leaders, but unfortunately the breeze dropped out again and technical issues forced Mirabaud LX to retire from the race. The 2011 edition of the Geneva-Rolle-Geneva event was also dogged by light airs unsuited to Mirabaud LX, but Thomas Jundt’s foiler still holds the monohull race record of 3 hours, 43 minutes and 47 seconds.

Mirabaud LX will be on exhibition at stand J 42 at the Paris Boat Show, Porte de Versaille from 3-11 December. 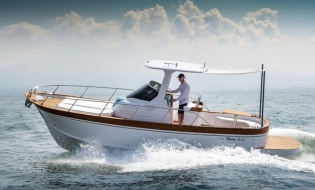 Libeccio 8.5 Walkaround is the model of Gozzi Mimì, which offers unprecedented liveability for this... 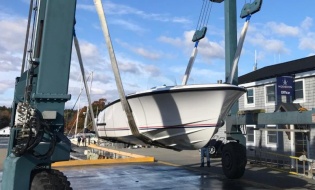 Two superyacht tenders were launced by Hodgdon, as recently announced.