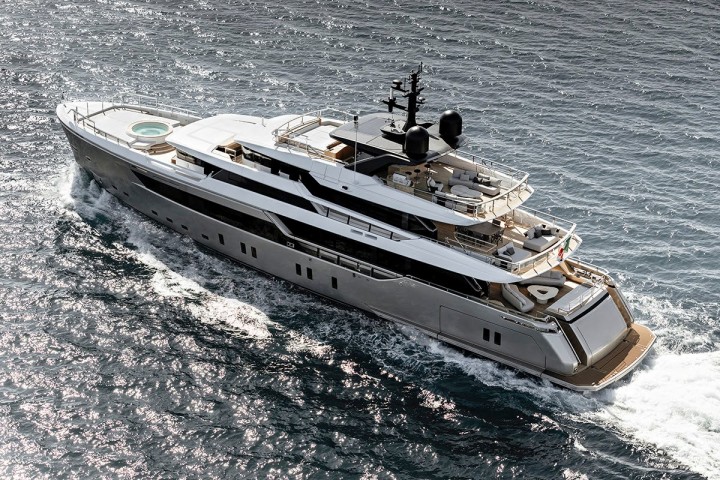 New scenarios to offer the owner and those who will live on the boat, the superyacht ALLOY is an example of the Shipyard's unique ability to give a new meaning to the way of understanding nautical design, breaking down a pre-established aesthetic and living order to give life to projects built around the customer's needs.
A proposal capable of offering new points of view that in the recently delivered third unit, are told through the collaboration with Studio Zuccon International, for the exterior lines, and the Liaigre studio, a well-known name in the history of interior design in France and throughout the world, for the interiors. A fast-displacement model measuring 44.5 metres in length and made entirely of aluminium, the Sanlorenzo superyacht ALLOY, thanks to a design that alters the traditional layout of spaces, and in the of maximum harmony between interior and exterior, takes the concept of liveability to its peak.

The emblem of this approach and the conceptual fulcrum of the project is the owner's cabin, conceived as a private apartment of 147 sqm, divided into three interconnected levels, with an indoor and an outdoor area, a solution never seen before on a superyacht of this size.

Located on the main deck, in the yacht's wide body, it consists of a 70 sqm sleeping area with owner's suite, walk-in wardrobe, bathroom and lobby, and a 66 sqm area on the upper deck divided between an indoor studio area and a large open area aft with sundeck, swimming pool and relaxation areas; a real furnished terrace overlooking the sea in the most private area of the yacht thanks to the "ziggurat" layout of the decks, which allows for total visual privacy. 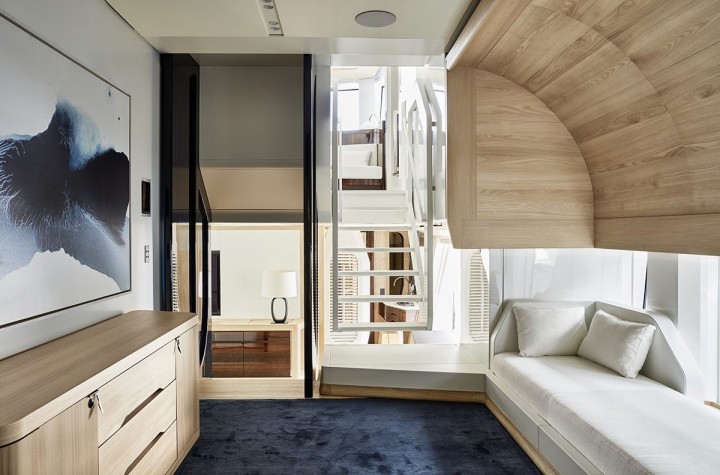 A superyacht that opens up to the sea, offering surprising spaces to enjoy both inside, such as the living area on the main deck, the relaxation/cinema area on the upper deck and four double cabins on the lower deck, but also and above all outside: from the sun deck, with its 83 sqm outdoor area offering multiple possibilities for open-air lunches, sunbathing, relaxation and socialising, to the large 102 sqm beach club comprising of a bar/gym area and a folding stern platform and two side platforms.

The collaboration between the Sanlorenzo team and Bernardo Zuccon of the Zuccon International Project studio, whose creativity was entrusted with the design of the exterior lines, made it possible to conceive, design and build a 480 GRT three-deck yacht with an extremely sleek profile and at the same time to offer mega yacht solutions, such as the three-level owner's suite.

"Among all the ALLOY projects, in 137 there was a particular development thanks to the collaboration with the French studio Liaigre, which took care of the interiors, and which certainly gave a great added value in terms of interpretation of this project, consolidating and strengthening this fascinating architectural design of the range and giving it even more recognition and identity.
Another important aspect concerns the colour theme. The champagne colour has created a different mood for the boat, which, in the sportiness and tension of its lines, acquires a more classic and elegant approach.
The ALLOY is an example of how the exploration of the territories of living, in boats as well as in architecture in the broadest sense, can still grow, nourish itself and translate into new languages and new opportunities for life, because after all, this is the primary role of architecture itself: to be, first and foremost, an instrument to allow man to live better".
Bernardo Zuccon

The interiors of the ALLOY 137 bear the signature of the French architecture studio Liaigre which, in its first collaboration with Sanlorenzo, brings on board its concept of rigorous aesthetics that enhances the beauty of the materials through a contemporary yet timeless style that combines elegance and simplicity. The project stems from a very simple idea: to create an extremely welcoming space that reflects the elegance of the owner's lifestyle and his sophisticated tastes. This goal has been achieved through a design process that artfully combines macro and micro, starting with significant work on the layout, conceived to guarantee the maximum liveability of all spaces in the name of functionality and comfort, to the care of every smallest detail.

The work on the space, which represents the structure of the entire interior design project, reaches its peak in the owner's cabin, where the layout is very flexible thanks to the choice of eliminating fixed partitions and opting for sliding panels instead of walls, which allows the environment to be organised in a less rigid way, adapting it to the owner's needs and giving the space great visual fluidity.
This made it possible, for example, to position the vanity unit directly on the opening terrace, a solution never seen before, and not closed inside the bathroom. 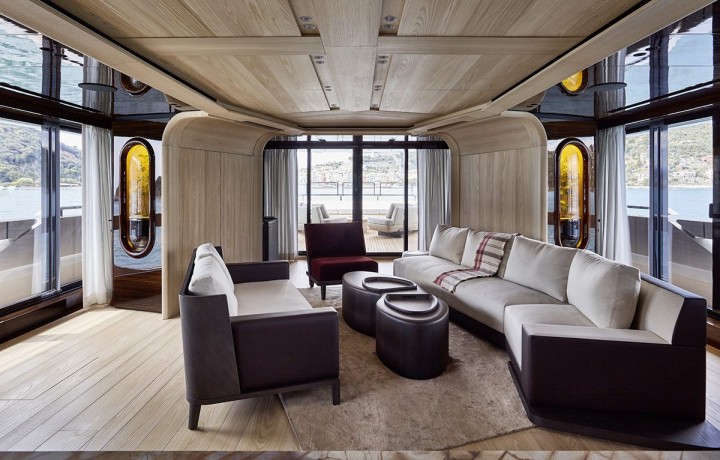 “We approached this interior project in terms of challenge: starting from a given structure, we thoroughly studied every single environment to maximize its functionality by creating and obtaining new living spaces for the owner. "
Guillaume Rolland, Principal and Head of yacht design Studio Liaigre

A sense of welcome permeates the interiors which, as if reflecting the fluidity of the sea, guides the owner through enveloping, sinuous spaces where every corner has been bevelled and rounded and the door structures have been shaped around the human figure, all to emphasise the concept of hospitality to the maximum.

This choice is already visible in the main deck salon, where every element, from the woodwork on the ceiling to the arrangement of the furniture, breaks up the strong geometry of the room, destructuring its static nature while maintaining a feeling of symmetry to create a relaxing atmosphere.
The focal point of this room is a photograph by the Japanese photographer Shibata, selected for its intense shade of red that immediately catches the eye and for its triangular composition that introduces a new axis into the room, like a window looking out onto another world.

At the owner's request, the interiors are inspired by an Asian style but with a French touch. The studio wanted to merge these two cultures by incorporating into the design some elements and details reminiscent of Asian culture but treated in accordance with the historical French culture of interior design.
Examples of this are the doorways that narrow slightly at the bottom, typical of Asian architecture, and the choice, in the main salon on the main deck, to integrate two terrariums in glass capsules containing bonsai trees into the walls.
This contamination is also reflected in the choice of materials, which skilfully combines a light-coloured wood such as natural elm, which belongs to the French tradition, with a wood with a precious grain, widely used in Asia, such as the polished eucalyptus in which the seascape is reflected. 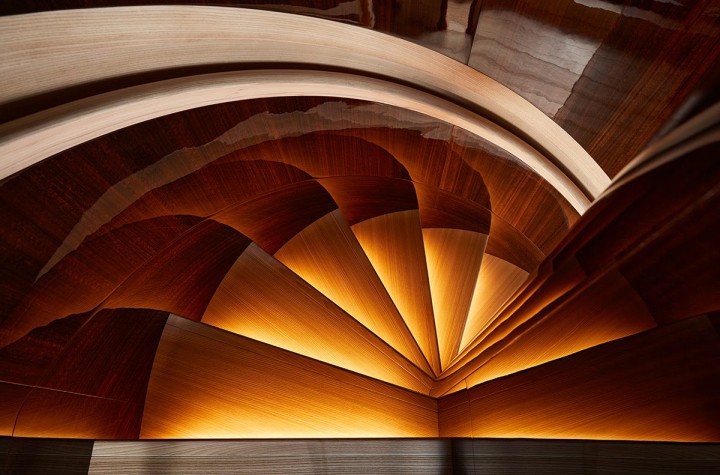 The two woods, treated with the finest cabinet-making techniques, as in the details on the ceiling of the main deck or in the handrail of the central staircase, carved inside the curved wall from a single piece of wood, are the protagonists of the entire interior design project and reveal a craftsmanship of the highest level that highlights the beauty of natural materials.

The decision to use only two main materials gives a strong sense of unity, coherence and relaxation to the interiors, which are modulated according to a precise chromatic code that favours darker shades for the evening areas, such as the cinema/karaoke room on the upper deck, where the only contrasting material is onyx stone, whose precious shades customise the interiors of the bar, and lighter shades for the areas dedicated to daytime use.

Another key element guiding the interior design was the desire to create "micro-stories", as the studio defines them. This feature of the design, based on the mathematical theory of fractals, made it possible to create "environments within environments" and thus give the sensation of a much wider and deeper space.
A perfect example of this is the owner's cabin, where the double staircase connecting the three levels has been reversed with respect to the initial layout to create as much space as possible and create on the lower level a vanity area that is separate from the sleeping area, and a larger, more private desk for the owner's study on the upper level. This concept can also be seen in the saloon on the mezzanine level, where the sofa is dominated by a surprising vaulted ceiling that strongly enhances this space, transforming it into an element that stands out from the surrounding environment.
And finally, in the guest cabins where the poetry of space within space is told in the reading or conversation niches in the walls next to the double bed. Small but comfortable spaces that envelop the body, creating an unexpected and functional space in which to relax, read or converse. 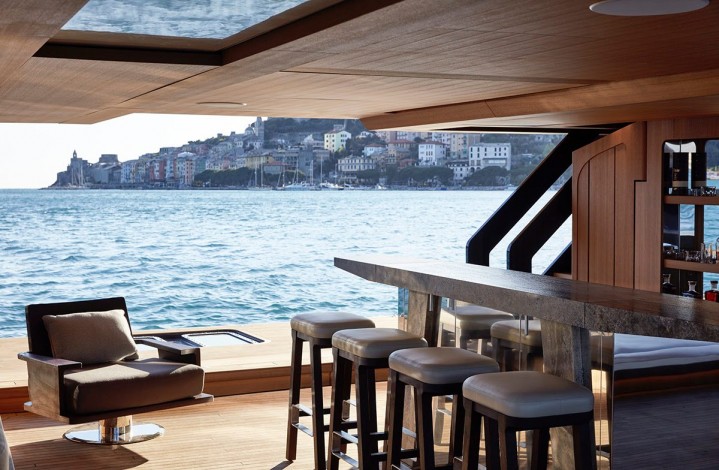 The furnishings are all custom made, designed by the Liaigre studio, and respond to specific design requirements, from the upholstered furniture on the main deck conceived to animate the space, to the special cut of the sofa in the cinema/karaoke area on the upper deck to enable the crew to pass through, to the swivel armchairs that can be rotated according to the intended use of the space, to the outdoor lamp in the dining area aft on the upper deck, to name but a few.

A new project that demonstrates Sanlorenzo's unique sensitivity to every scale of design, thanks to the involvement of highly skilled local craftsmen, and its ability to amaze by bringing new creativity and visions on board, paving the way for new design solutions that have never been tried before. 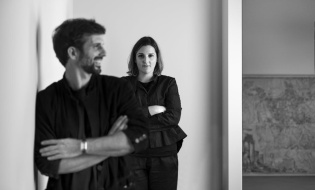 The collaboration between Poltrona Frau and Zuccon International Project has created the Jacques-Yves modular seating... 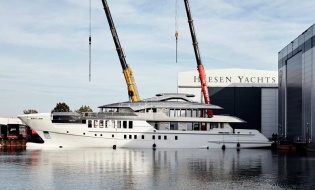 Heesen announced that on Saturday 3 November 2018, the hull and superstructure of Project Castor...