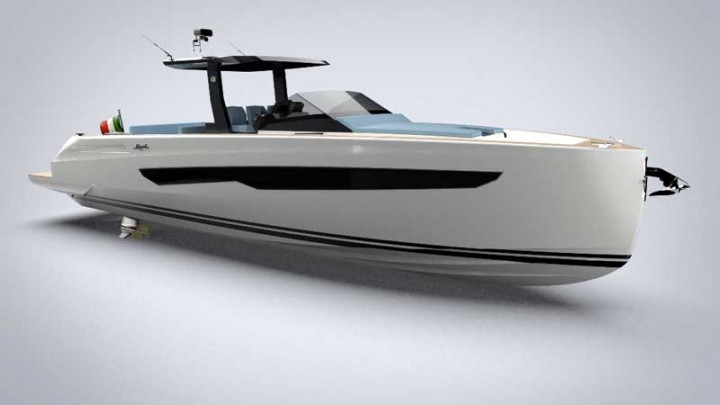 Fiart Mare is celebrating an extraordinary milestone - its 60th anniversary - by launching an equally extraordinary new model, the Seawalker 43

Fiart Mare is continuing to evolve its range with new models that introduce new technological innovations and standards of liveability designed to satisfy the demands of an increasingly discerning and broad-ranging client base. The Seawalker 43 will be presented to the public at the Cannes and Genoa Boat Shows in September 2020.

The Seawalker 43, which is scheduled to splash next July, is a relaunch of the hugely successful Mediterranean motoryacht concept unveiled as the Fiart Seawalker 33 in 2012. The latter, in fact, paved the way for the rise of the so-called “super tender”, a motoryacht type currently very much in vogue with owners. The Seawalker 43, however, is an even more personal take on that concept in terms of both its aesthetic and technical content.

Project
Stretching 13.84m in length and 3.99 in the beam, the Seawalker 43 has a modular walkaround deck design and extraordinarily large interiors for a craft of its category. It is an incredibly versatile model and will not only delight owners as a potential tender to beach house or superyacht but also makes the perfect fast, nimble, express cruiser. A comfortable and fun vessel whether you are alone or want to take along the entire family. An effortlessly brilliant day boat for swimming or cruising. 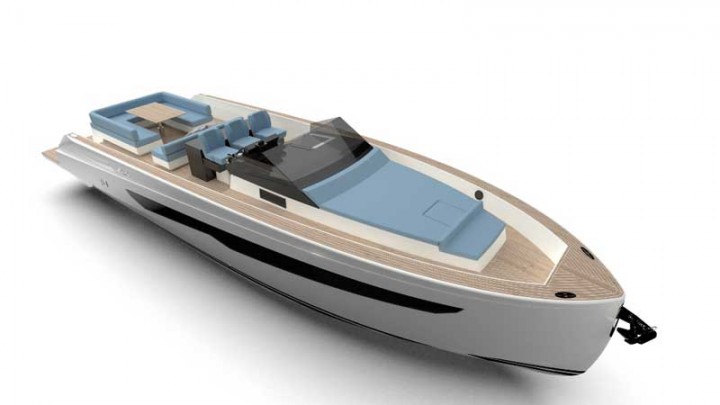 The Seawalker 43 is based on a completely new hull which, in terms of its design and construction, draws on the yard’s 60-year history during which it penned and built more than 150 different models. Its waterlines were crafted using the most up-to-date and powerful CFD (Computational Fluid Dynamics) systems to ensure it delivers the effortless seaworthiness of all Fiart Mares. So, aside from carefully honed waterlines and a variable vee-bottom, optimised to interact efficiently with the Volvo propulsion system (a choice of IPS or inboard-outboard), the yard’s designers focused on lowering the 43’s centre of gravity as much as possible. As a result of that meticulous work, the Seawalker 43 is less susceptible to roll and thus extremely stable both underway and at anchor.

Design
The yacht’s moderately raked bow, which incorporates a completely hideaway mooring system with the anchor in the hawse pipe, lends the design character. The same applies to the bulwarks which are 60 cm high in the cockpit area and thus provide protection to occupants, creating a pure, linear, tapering sheerline thanks to the absence of the usual guardrail. That sense of dynamism is underscored as well by the knife-shaped elongated strip of dark side glazing that makes the Seawalker so instantly recognisable.
The windows also obvious draw copious amounts of day light into the interiors, enhancing the clear feeling of space and airiness throughout.
As has been the case with so many of Fiart Mare’s models, the volumes are beautifully judged and this too adds to the long list of the Seawalker 43’s pluses. 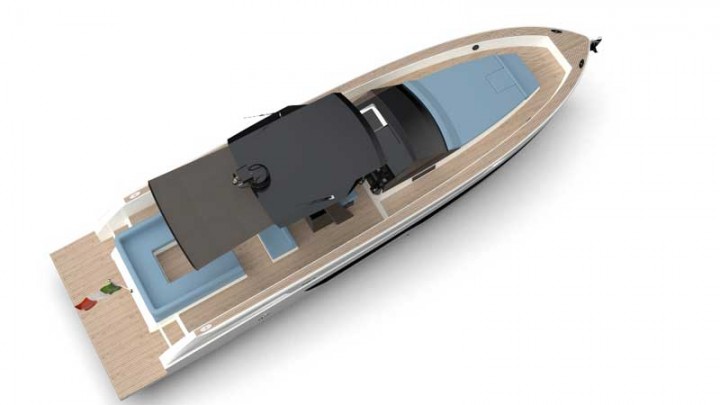 The interiors
The designers really pulled out all the stops for the interiors, resulting in the Seawalker 43’s peerless liveability which also sets it head and shoulders above other models of comparable type and dimensions. This is due in great part to its generous volumes, but of the three dimensions, it is the headroom in both the forward and aft cabins that really make this Fiart Mare unique. The Seawalker 43’s aft cabin has a ceiling height of 1.8 m and so even an adult can comfortably stand upright there. This says it all as aft cabins in this category of boat very rarely offer better than 1.5 m of headroom and thus always involve a lot of bending and crouching. So, the fact that it guarantees two full separate cabins below decks – the forward with a double berth and the aft with side-by-side singles - makes the Seawalker 43 unique in its category. To top it off, there is a huge bathroom with a separate shower box.

Fiart Mare offers a choice of layouts. One version has an inside dinette that converts to a double berth instead of the aft cabin. Equally, owners can choose to have a vast storage room, a configuration that may interest those wanting to use the Seawalker 43 as a support vessel for a luxury mothership. In all the layouts, however, the companionway into the interior and the entrances to each of the cabins are both safe and comfortable, thanks to very excellently designed ergonomics.

Deck layout
Another of this new Fiart Mare’s signatures is its modular deck layout which, like the interiors, reflects the efficiency of a versatility-focused design concept.

The console area is large enough to embrace not just the companionway, but also a full console with a complete array of instrumentation and screens that creates a seamless interface between man, engines and boat. A very modern NMEA 2000 digital network means the traditional onboard electric system has been pensioned off and replaced by Garmin HD touchscreen displays which provide information on propulsion, boat performance, course, water depth, etc. This not only allows all of the optional onboard systems and equipment, from the water-maker to the gyroscopic stabilisers, to be monitored but controlled also. Diagnoses can be run on them if required as well.\ 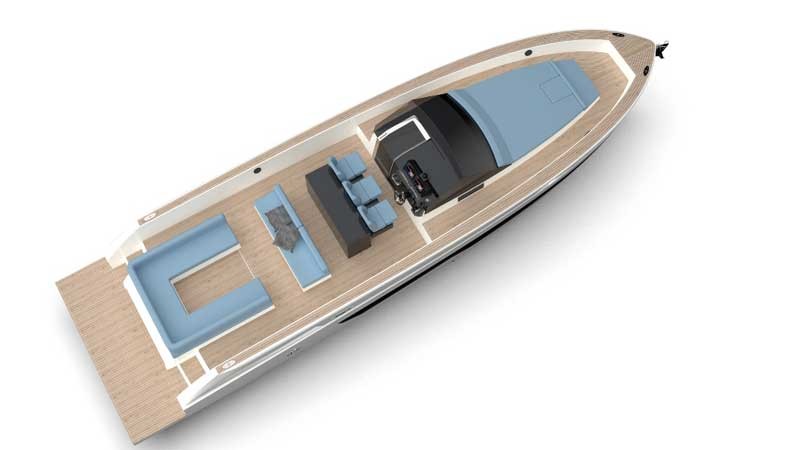 The central console, which is protected by an angled frameless wraparound windscreen, divides the deck into two distinct areas. Both deliver absolutely superb takes on the al fresco lifestyle thanks to a fit-out that turns its rich, high spec content and modularity into a trademark. While the forward section features a classic sun pad on the deckhouse roof with a forward-facing sofa foremost from which guests can enjoy the stunning sight of the sea underway, aft, the Seawalker 43 reveals features that guarantee it stands head-and-shoulders above the rest of the market.

A choice of two versions is available for said aft section, both brimming with solutions inspired by the yard’s long and illustrious tradition.
The first is what might be described as the classic super tender configuration and is standard for this model. It places the galley/bar behind the helm seats with a second sun pad aftmost. A system of fold-down cushions allows the latter to be partly converted to a sofa and it can also be paired either with a dining table or also a second aft-facing sofa to create a proper al fresco dining area.

In the second version, the Seawalker 43 can be fitted with the trademark Fiart Mare-style cockpit already seen on other models in the range. In this instance, the aft sun pad is replaced by a U-shaped living area with a table that disappears into the deck. It can also be raised at the touch of a button thanks to an electrohydraulic mechanism, turning the area into either a dinette or a sun pad. This layout frees up a large area for the owner and guests which can be accessorised with free-standing furnishings or left empty to further enhance the craft’s versatility regardless of its use.

The stern platform is also noteworthy: featuring dual access from the cockpit, it can be ordered up to 1.2 metres long. Thanks to an electrohydraulic system, it can also be lowered beneath the water’s surface to facilitate sea access for guests and water toys alike. The toys can also be stowed in the large aft locker which, in the version with sun pad, can also accommodate a small tender.

Propulsion
The Fiart Seawalker 43 is also intriguing in terms of its performance figures which vary according to the power and type of propulsion installed. 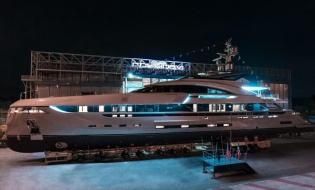 Italian shipyard Rossinavi has presented with a private ceremony in their facility of Viareggio EIV... 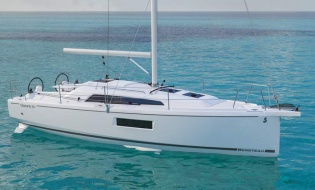 Championing ever more innovative boats for everyone is definitely BENETEAU’s hallmark, and in this respect...