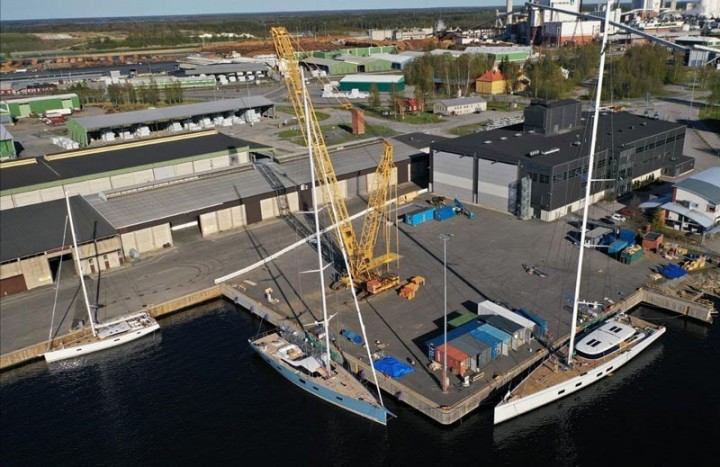 For a custom builder it’s unprecedented to launch three large yachts in a period of just ten days, but Baltic Yachts achieved it following an intense two and half year build schedule at their Jakobstad yard in Finland.

Baltic Yachts’ owner Professor Hans Georg Näder attended a special celebratory event to mark the launchings, during which he praised the dedication, skill and experience of Baltic’s boat builders. “These attributes lie at the heart of this achievement,” he said, paying tribute to the high level of skill inherent in the Baltic Family, passed down through generations of craftsmen. “This is one of the company’s greatest assets,” he added.

Joining the 250-strong Baltic Family who celebrated the three launchings, chief executive officer Henry Hawkins, said: “Thousands of hours of intense work has resulted in these three world class yachts we see before us today.” 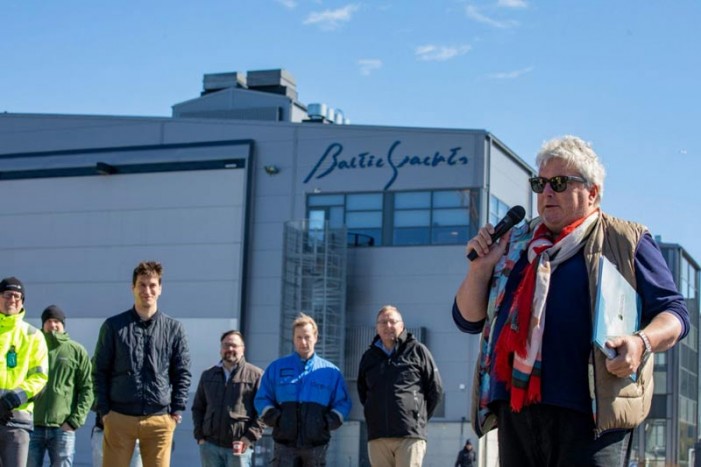 First into the water this spring was Lurigna, hull number two of the new semi-custom Baltic 67 Performance Cruiser platform. Designed by judel/volijk & co as a stylish, easy to sail, fast family cruising yacht with a great light to moderate downwind sailing performance, the Baltic 67PC is a versatile yacht offering multiple options above and below decks within the same hull design.

The owner of Lurigna has opted for a closed transom, fixed keel and a single rudder and despite her luxuriously finished accommodation – chosen from a number of options from interior specialists Design Unlimited - she is being optimised for offshore racing, her first competitive outing being the 608-mile Rolex Fastnet Race starting from Cowes in the UK this August. 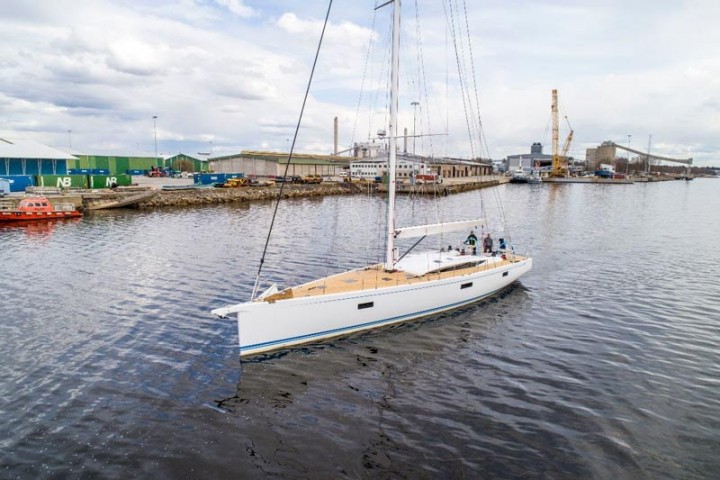 Lurigna is aiming to take part in the Rolex Fastnet Race in August (p.c. Prime Productions)

Next into the water was another yacht with an eye on competition although the Baltic 112 Liara is designed primarily as a very comfortable family cruising yacht with the ability to sail long distances at pace. Her owner is planning to be at the America’s Cup in New Zealand in 2021 by way of the Monaco Yacht Show this September and the Caribbean 600 and St Barths Bucket in 2020.

Her touch button three-dimensional headsail sheeting, weight saving programme, including extensive use of titanium, and speedy looking hull shape all point to her competitive aspirations.

But comfortable, environmentally friendly living afloat is also high on the agenda with a large lithium ion battery bank enabling the yacht to run for up to 10 hours in quiet mode with all systems running and no power generation required. 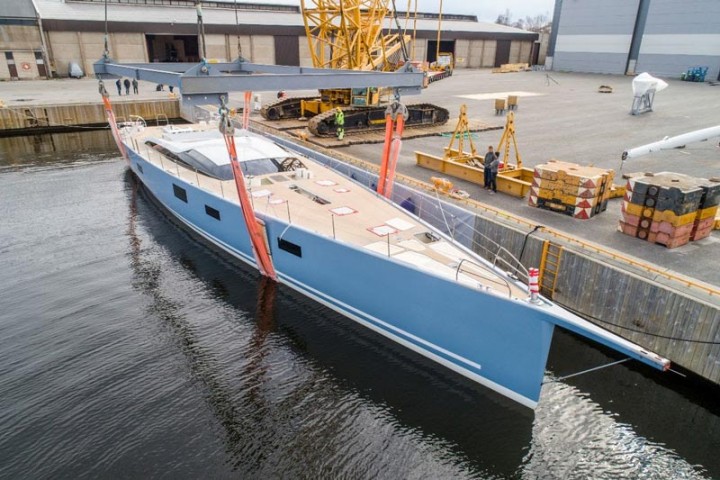 Looking cool in blue, Liara is craned into the water (p.c. Prime Production)

The third yacht to launch was the ground-breaking Baltic 142 Canova, a yacht filled with innovative design from her Dynamic Stability System (DSS) foil to a hydro-generation system and electric propulsion.

Baltic Yachts has worked closely with naval architects Farr Yacht Design and interior and exterior design specialist Lucio Micheletti to create what will arguably be the most eagerly awaited superyacht delivery of 2019.

Baltic Yachts has secured a world first in Canova’s sliding foil, designed to reduce heel, increase speed and improve comfort by reducing pitching. No other yacht of this size has used this technology. Moving transversely in a cassette built into the yacht just below the waterline, the foil will extend 6.5 metres to leeward when deployed giving Canova a considerable performance boost and a much more comfortable ride for her crew and guests with less heel and dampened motion. 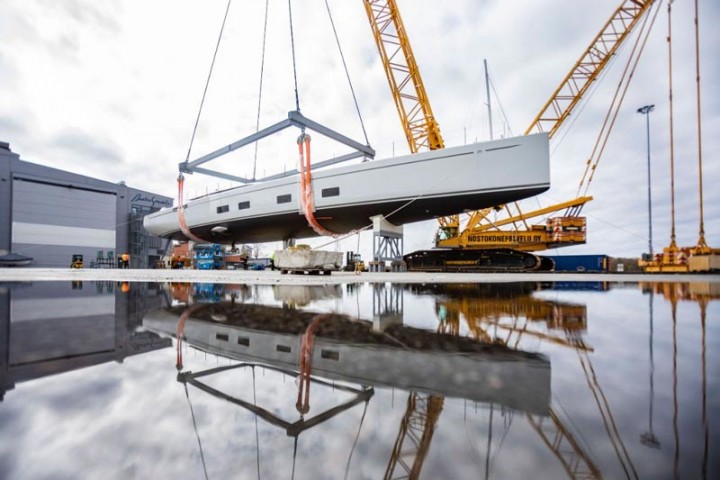 Equally innovative is the yacht’s genuine diesel electric propulsion and power generating system. The yacht’s main propulsion is provided by a 380kW electric motor driving a forward facing pull propeller mounted on a leg which rotates through 340 degrees so that it can double as a stern thruster.

Two generators charge the batteries which drive the motor but, while sailing, the free-wheeling propeller, working through the electric motor as a generator to produce up to 20kW, can also charge the yacht’s large bank of lithium ion batteries. These in turn allow the yacht to operate in quiet mode for long periods of time.

A great deal of planning went into Canova’s ability to be maintained easily and remain independent for long periods of time without having to seek out specialist help or a sophisticated shipyard.

Her owner plans to take her on long distance trans-ocean passages all over the world. 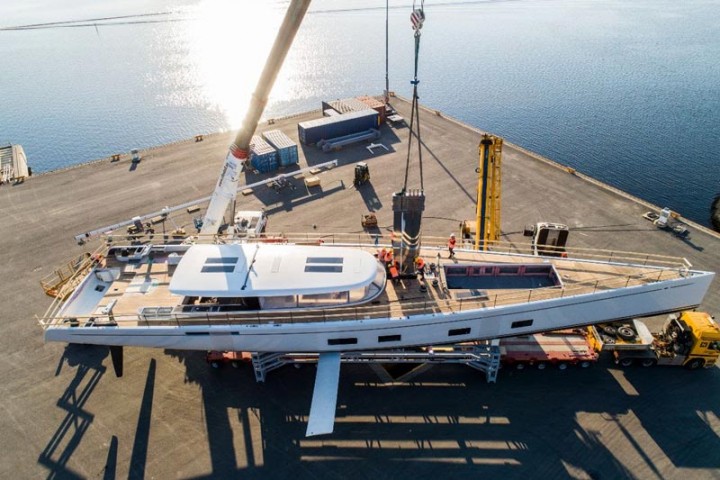 Canova with her DSS foil deployed to starboard, is prepared for launch (p.c. Prime Production)

With trials of these three yachts now underway prior to completion and delivery to their owners, Baltic’s latest new build, Baltic 146 Custom, is well underway. She is the third largest yacht by volume the yard has ever built and is scheduled to launch in 2021. Her owner is planning a programme of global cruising. 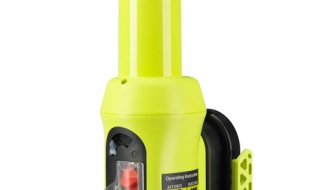 Search and rescue transponder assists in the rescue and recovery of survival craft. Global leader in... 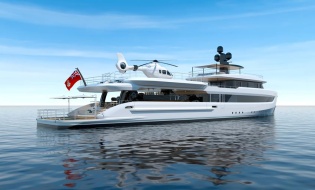