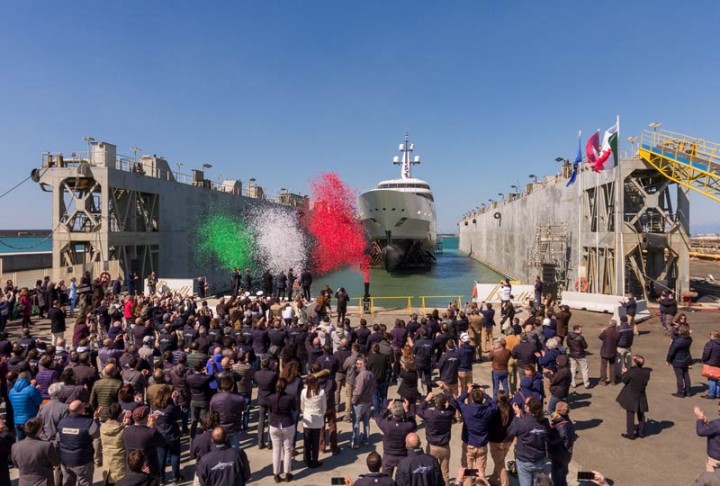 Benetti completes the third and final chapter of the first part of its Giga Season with the launch of 108-meter FB275. In her streamlined hull she features a cinema, a gym with sauna and a drop-down balcony to enjoy the connection with the sea at full.

FB275’s 108-meter steel hull has a beam of 14.5 meters with a draft of 4.4 meters. Her superstructure has been built in aluminium, and her displacement is 3,600 tonnes. Created with the scope to cruise the oceans for thousands of miles without the need to refuel, FB275 has a fuel tank with a capacity for 345,000 litres, enabling her to achieve a range of 6,500 nautical miles at 14 knots. The yacht’s exterior lines were designed by British firm RWD, with Benetti’s in-house team creating the interior.

For just over four months the eyes of the world have been turned to Livorno, where Benetti has surpassed itself with the launch of three epic yachts. Last December, 107-meter FB277 was launched, followed in February by FB272, another over 100m yacht, and now, completing this trilogy of staggering yachts, 108-meter FB275 has been launched. Italian yacht building has never before seen the likes of such a period of immense productivity and the accomplishments of Benetti mark a new era for the shipyard in which it will compete with the builders of the very largest private yachts in the world. 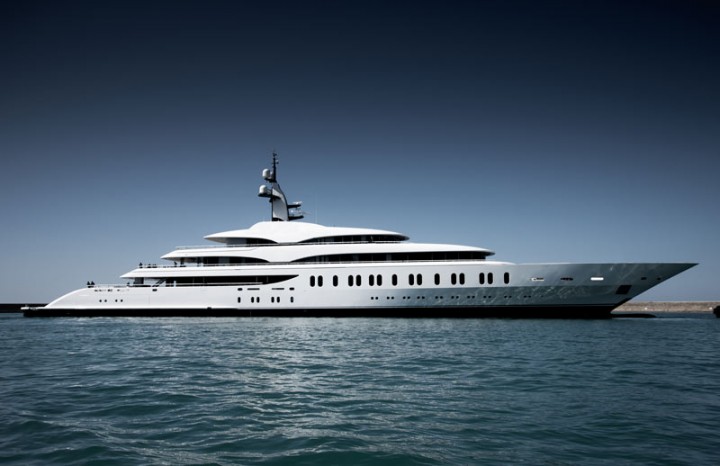 More than 1,000 sqm has been devoted to exterior spaces, spread across five decks: an Observation Deck at the very top of the yacht offers breath-taking views and social circular seating, on the Bridge Deck two L-shaped sun pads are set around a 1.5 meter firepit, the Owner’s Deck has its own exclusive dining and seating areas, and on the Main Deck a huge dining table and more intimate seating groups, as well as the massive heated swimming pool, are found. On the foredeck two tenders of 14 meters each can be stowed. Another customised 10-meter tender will be stowed in the yacht’s garage on the Lower Deck, alongside up to 8 maxi jet skis. FB275 also features a 1,500 litres petrol refuelling station for all the toys on board. The yacht is equipped with five cranes and two special hydraulic scissor-type lifts for lifting tenders up to 15 tonnes. 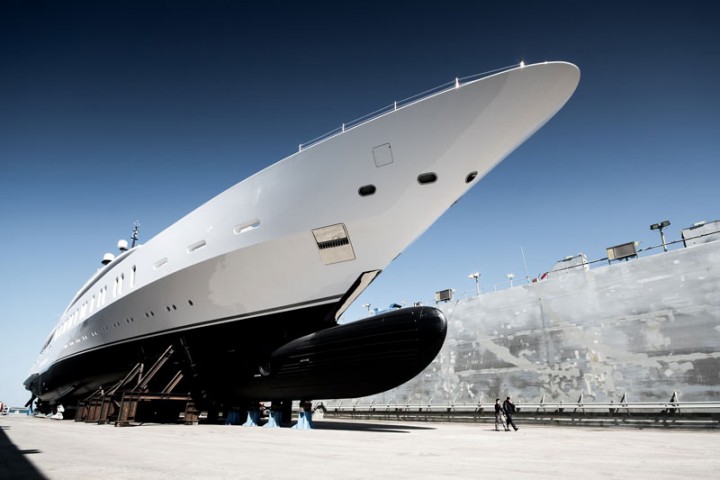 The yacht’s main propulsion comes from two MTU diesel engines rated at 2880 kW each enabling a maximum speed of around 18.5 knots. The main gen sets are four CAT C18s rated at 465 kW. FB275’s impressive environmental credentials are in part down to an electric Schottel stern SPJ pump jet with 500 kW power which gives outstanding manoeuvrability as well as enabling the yacht to travel for short distances under entirely electric propulsion. FB275 is also equipped with two Rolls-Royce variable-pitch bow thrusters rated 200 kW each, which are integrated with the stern thruster with a DP system interface realized by Rolls Royce. The stabilizer system is completed with four fins supplied by Naiad-dynamics. 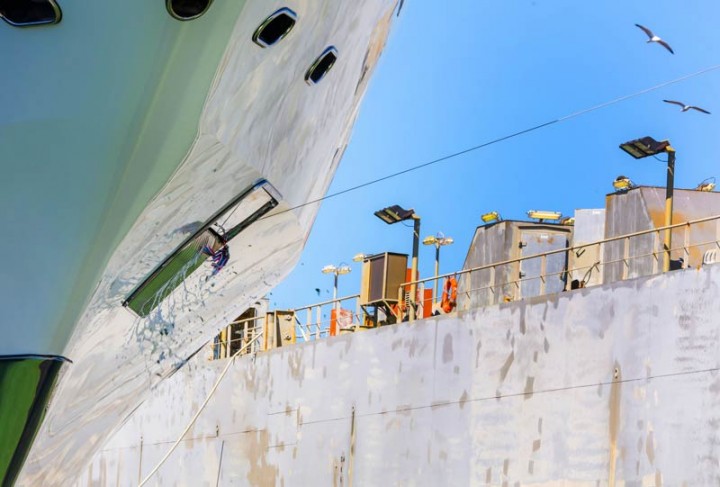 Regarding the launch Paolo Vitelli, President and Founder of Azimut|Benetti Group, declared: “The launch of FB275 marks the culmination of the first part of our Benetti Giga Season, yet at the same time, begins a new era of building giants. In the creation of these three sister yachts, we have proven that our huge investments and constant endeavor to progress has, and will, continue to pay off. I am delighted to be able to celebrate with the owners, colleagues and world’s press in this historic moment, and to give thanks to all those who contributed in the gargantuan effort to build these glorious yachts. I also offer the city of Livorno our sincere gratitude in its continuing support of all Benetti’s enterprises”. 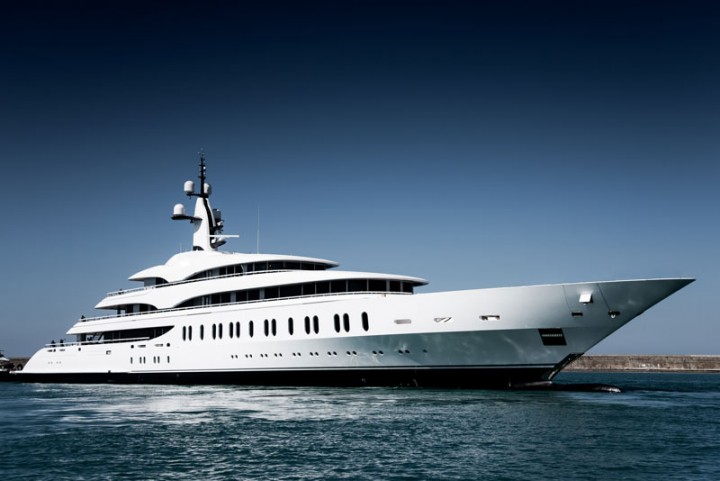 Marking the end of the first part of the ‘Giga Season’, but also a longer-term plan to build larger yachts, Benetti’s Giga yacht construction programme has been the subject of major investment at the shipyard. An ambitious business plan has prompted financial input in infrastructure, organisation, safety and security, to overcome the challenges presented by building such gargantuan yachts. Expansion at the Livorno shipyard, in the form of two new generation steel structure sheds, have enabled Benetti to massively increase its productivity. The sheds are each of 58.5 x 137 meters and a height of 30.4 meters, and both are equipped with two gantry cranes with a maximum capacity of 40 tonnes. The programme enabled Benetti to build three Giga yachts in parallel. The development by Benetti of the Giga yacht construction programme has also required the creation of a special team of experts in this specific type of project. Today, Benetti is one of very few shipyard in the world with the capacity and capabilities to build yachts over 100 meters long. 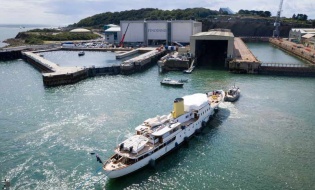 MY Marala arrives at Pendennis for major restoration project 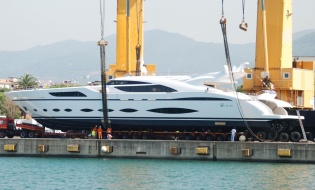 The first unit of the brand new model AB 145 was launched in the Port...