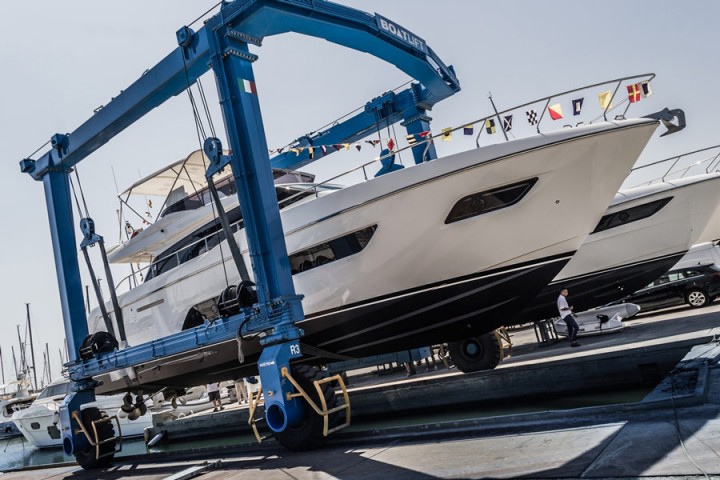 Its already a great success before its debut. While the first unit is set afloat, three more hulls of the used flybridge have been sold more than one month ahead of its world première, at the forthcoming Cannes Yachting Festival 2015.

Cesenatico (Forlì-Cesena), August 6th, 2015 - Ferretti Group announced the launch of the first Ferretti Yachts 550, the used model of the Group’s well-known brand, marking its return to the flybridge yachts production under 60 feet in length. 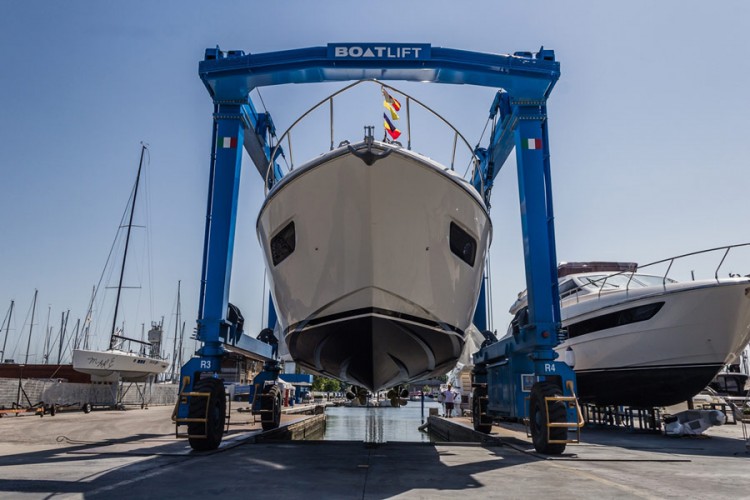 When the first 55 feet hull was set afloat at the Cesenatico quay, powerful feelings of pride stirred up in all Ferretti Group’s personnel of the shipyard in Forlì, where the yacht was built. Interior and exterior fit-out, as well as all technical testing - i.e. certification test approval by RINA performance tests, checking of all on-board equipment and systems - will be completed within the next few weeks.

“We are enthusiast to see the first Ferretti Yachts 550 put into the water”, stated Stefano de Vivo, Ferretti Group’s Chief Commercial Officer. “This used model is the result of accurate design and engineering work aimed at building a yacht which fully embodies our brand in terms of design, performance, safety, functionality, and reliability. Our priority was to put on the market a top-quality, highly competitive yacht, in order to win over current and prospective owners of Ferretti Yachts, not only in our established markets, but also in the Asian Pacific area, where the brand is a synonymous with Italian boat-building excellence.”

Although just set afloat, the used 55-footer by Ferretti Yachts already enjoys a great commercial success: three units have already been sold way ahead of its official world première at Cannes Yachting Festival 2015, slated in Côte d’Azur from next September 8th through 13th. This is yet another proof that Ferretti Yachts 550 has already captured the international yachting market.

While the first yacht is just about to be delivered to her French Owner, the second Ferretti Yachts 550 has been sold in the Principality of Monaco. A third unit was bought by a Dutch Owner. 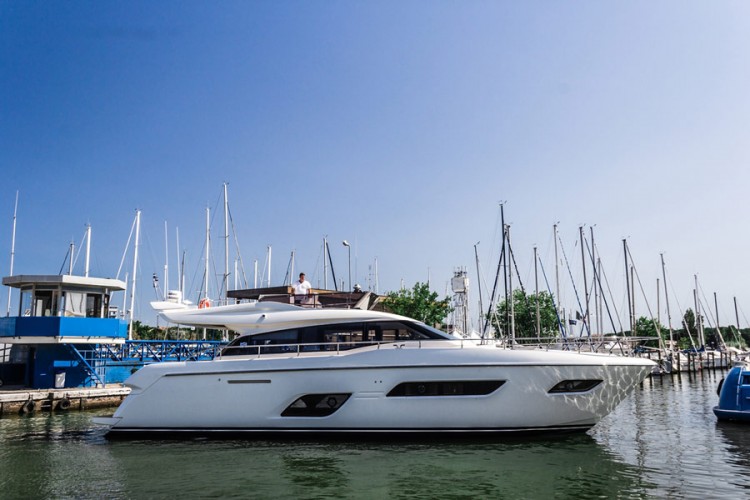 The 55 footer is the result of the cooperation between Studio Zuccon International Project and Ferretti Group’s Engineering Department. The profile of the boat features sober, streamlined, slender lines, blending together refined elegance and a sporty character. The uninterrupted glazing running across the main deck further enhances the boat’s rakish profile, and is complemented by a large, aerodynamic flybridge. Three large glazed surfaces - the cabins’ windows - can be found on both sides of the hull. 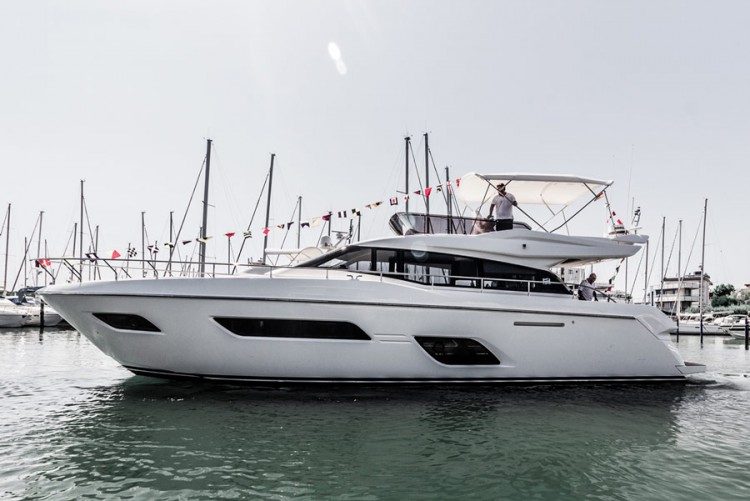 For her interior spaces and on-board equipment this yacht enjoys an equal standing with much larger yachts. Many outdoor relaxation areas have been conceived: the forward dinette area, furnished with facing sofas and a table; the large sunpad on the deckhouse; and the cockpit, featuring a large aft sofa and a table. On the flybridge, the storage cabinet and the restyled, small-size pilot station instrument panel allow to extend the relaxation areas - both the sunpad and the comfortable dining area - even more.

The Group’s architects and designers have found very appealing décor solutions, adding elegance to all on-board ambiances and preserving the range’s unique Made-in-Italy style and charm.

The areas below deck come in as many as three alternative layouts. The two ‘traditional’ ones include three cabins - the master stateroom, the VIP and the guest cabins - with two or three heads. This wide range of solutions can attract different types of owners, who may choose from among the different layouts depending on the way they intend to use their yacht.

As usual, the by-now well-known ‘Tai He Ban by Ferretti’ special edition is also available, targeted in particular at the owners in the Asia Pacific region. In this version, some cabins can be replaced by areas devoted to business meetings or social events, and the galley can be moved below deck, thereby further extending the relaxation areas on the main deck.

The new Ferretti Yachts 550 will install two shaft drive Cummins QSM11 715 mhp, 2,500 rev/minute engines. While highly-performing, these small-sized and lower power engines will push the yacht to a maximum speed of 30 knots and a cruising speed of 26.5 knots. The range will be 250 and 300 nautical miles, respectively. A bow thruster will be installed standard on the Ferretti Yachts 550, while a gyroscope stabilizing system can be installed upon request to ensure even more comfort at anchor and facilitate berthing manoeuvres. 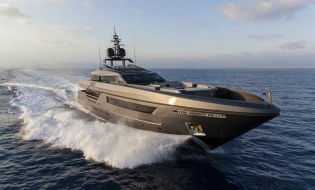 Baglietto announces the sale of the Baglietto 46m Fast

Baglietto, the Italian-based shipyard with headquarters in La Spezia, announces the sale of the Baglietto 46m...