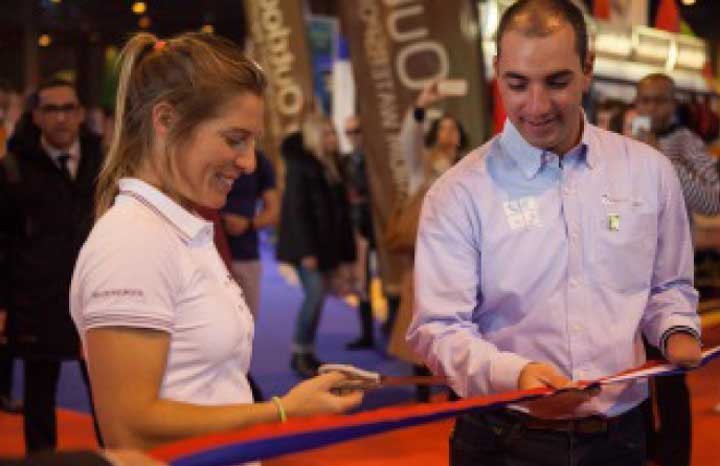 Inaugurated by Yves Lyon-Caen, President of the French Nautical Industries Federation (FIN) and Alain Pichavant, General Commissioner of the Nautic, in the presence of Olympic medallists Camille Lecointre and Damien Seguin, the 56 Nautic – International Paris Boat Show opened its doors this Saturday.

Whistling through the aisles is the wind of creativity and imagination, along with that of adventure and racing. And the great news is that it’s set to last for nine days. The official inauguration of the Nautic took place this morning in the presence of Yves Lyon-Caen, President of the French Nautical Industries Federation (FIN), Alain Pichavant, General Commissioner of the Nautic, as well as a host of major champions including Camille Lecointre, bronze 470 medallist from the Olympic Games in Rio 2016, and Damien Seguin, double gold medallist at the Paralympics.

Camille Lecointre, bronze 470 medallist at the Olympic Games in Rio 2016: “I come to the Nautic every year. When I was young, I lived in Le Havre and I came along with my parents to discover all the new boats. It was inspiring and it still is today. Right now, the show is an opportunity for me to meet lots of people from the watersports world and notably the suppliers and technical partners with whom I’m used to working. It really is an important event for me. For the first time this year, I’ve decided to take part in the Nautic Sup Paris Crossing. I can’t wait!”

Yves Lyon-Caen, President of the French Nautical Industries Federation (FIN) : “The Nautic Paris boat show is a very powerful occasion for the marine network and the marine industry. The reason for that is that at the Porte de Versailles we play host to 200,000 people, indeed 200,000 enthusiasts. As such, they don’t just come here to see some stellar boats but also to buy one. It’s important to note that together with France’s major shows, the Nautic represents a key moment where all the constructors sell. We reckon that over 60% of the marine industry’s turnover for the French market is made at this point. It’s a crucial time.”

Alain Pichavant, General Commissioner of the Nautic : “This edition of the Nautic is coloured by a series of major developments. Indeed, though the event remains the country’s leading yacht show with boats measuring up to 23 metres, this year motorboat racing has a significant presence here too. Evidence of this is that the motorboats have been allocated an extra half a hall more than last year. It’s clearly a market trend and this is reflected in Paris. Another point worth emphasising is that this 56 Nautic is clearly oriented around participation and experimenting with new experiences. This is notably the case with the large pool area set up in Hall 1 where visitors can come along and discover and have a go at windsurfing, canoeing and even wakeboarding. because it’s equipped with a winch, as well as a wave machine, which enables visitors to take part in beginners’ lessons in surfing and even try their hand at competition since the top performers at the Nautic will be rewarded by our partner Jeep. The emphasis has really been placed on entertainment as there is a packed programme of events so that everyone can experience something new.”

At 10:00 GMT on the Nautic stage, Amaury Sport Organisation unveiled the course for the Tour de France à la Voile 2017. Ten cities will play host to the fleet next year, between 7 and 30 July: Dunkirk, Fécamp, Jullouville (for the first time in the event), Arzon – Port du Crouesty, Les Sables d’Olonne, Roses in Spain, Le Grau du Roi – Port Camargue, Marseille, Hyères and Nice. No fewer than twenty or so crews have already announced their intention to participate in the 40 edition – the third sailing the Diam 24. Once again, professionals and amateurs, experienced sailors from the world of offshore racing, the Olympics and match racing, as well as young sailing talent will be able to share the same racetrack.

This Saturday, on the Région Bretagne (Breton Region) stand, the course for the 11 edition of the Tour de Bretagne à la Voile, that will run from 26 August to 2 September 2017, was revealed. The event will set off from Saint Malo and culminate in Piriac-sur-Mer via stopovers in Lézardrieux, Camaret-sur-Mer, Larmor-Plage and the Baie de Quiberon.

Macif and Offshore racing, a winning commitment At midday this Saturday, the large Nautic Stage welcomed all the skippers who are part of Macif’s offshore racing programme to look back at what has been a remarkable 2016: Charlie Dalin and Yoann Richomme, champion and number two of French Elite Solo Offshore Racing, François Gabart, winner of The Transat bakerly back in June and Martin Le Pape, who won the latest Skipper Macif selection. Following this conference, Charlie Dalin was awarded the French Solo Offshore Racing Champion trophy by the Figaro Class.

The Bridge spans the Nautic

The Bridge, which is celebrating 100 years of the fraternity between France and the USA via an oceanic challenge between the Queen Mary 2 and a fleet of giant trimarans, is calling in at the Porte de Versailles this week. Right next to the Nautic Café, which is entirely decked out in the colours of this atypical race, The Bridge invites the show’s visitors to discover this historic transatlantic race, which wil set sail again some one hundred years on from the first landing by the American soldiers who came to defend liberty alongside the Allies. With its participants grouping together the steel giant on the one side and the fastest yachts in the world on the other, helmed by offshore racing’s greatest talents, The Bridge is sure to bear witness to an oceanic cavalcade that will mark an epoch on its westbound course across the Atlantic. “It’s a very powerful symbol”, explains François Gabart, one of the first competitors to sign up aboard his maxi-trimaran Macif. The race will set off on 25 June 2017 beneath the spectacular Saint-Nazaire Bridge, bound for the Verrazano Bridge in New York!

Spotlight on the Transat Jacques Vabre
This afternoon at 14:00 GMT, still on the Nautic Stage, the organisers of the Transat Jacques Vabre revealed the latest on the 13 edition of the event, the start of which has already been scheduled for Sunday 5 November 2017. In this way, they announced that two cities from two countries were candidates to host the race finish. Two historic destinations, two coffee tree countries that have already provided a warm welcome to the winners in past editions. As such, next year, the finish will be decided either in Cartagena in Colombia, or Salvador in the state of Bahia in Brazil with it’s fabulous bay, as was the case between 2001 and 2007. All will be revealed on 14 February 2017 ! 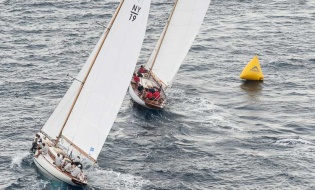 The 37th edition of the Régates Royales

The 37th edition of the Régates Royales will be once again in the spotlight from...