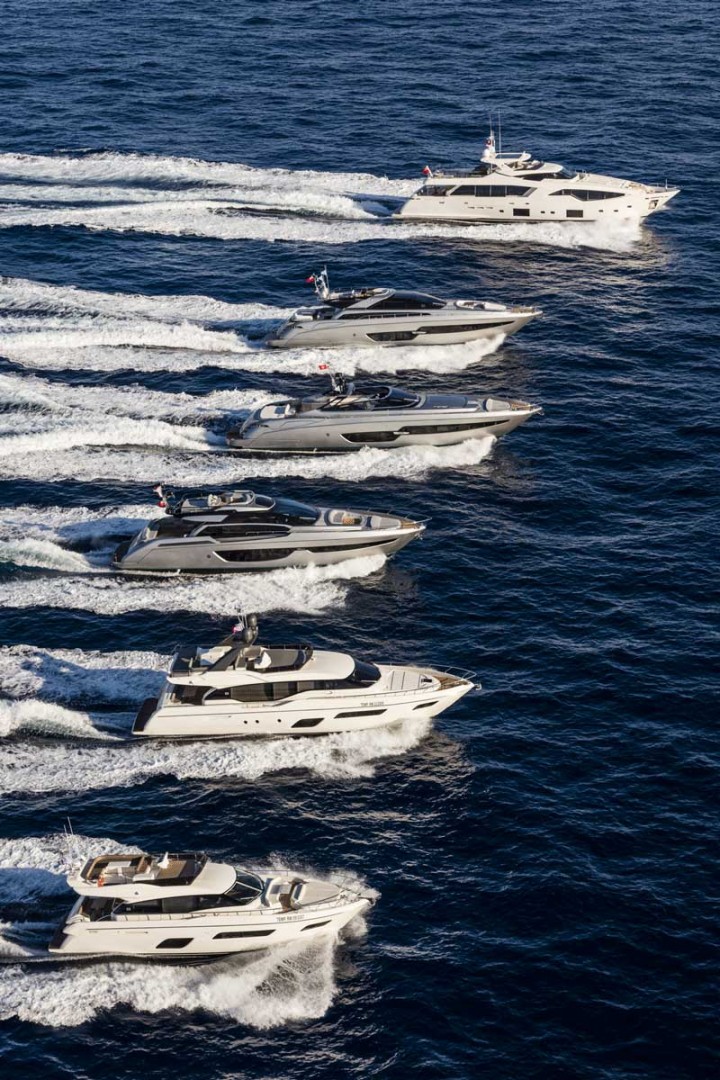 Ferretti Group shows up in style at the 38th Cannes Yachting Festival, taking place from September 8th through 13th, 2015 and bringing together on one stage - that of the Vieux Port and the Port Pierre Canto of the French town - all the key players on the international leisure boating scene.

At this event – representing the first opportunity in the new boat show season for the main yacht building groups and yachting enthusiasts from all over the world to meet - Ferretti Group presents a prestigious fleet of 21 crafts, including as many as 6 world premieres: Ferretti Yachts 550 and Ferretti Yachts 700 by Ferretti Yachts, 76’ Perseo, 88’ Florida and 88’ Domino Super by Riva and Custom Line 108’ by Custom Line.

At the press conference opening the boat show, Ferretti Group’s CEO, Alberto Galassi, presented an initial review of the positive key figures achieved this year, which are fully in line with the ambitious targets announced at the presentation of the Group’s development and growth strategic plans for the three years 2015-2017, focusing on the further development of the Group’s core brands - all largely thanks to Product Research & Development investments totaling € 50 million, which are supporting the launch of as many as 27 new models.

“This year, at Cannes, our Group presents 6 world premieres, confirming our commitments, continuous brand investments and strong focus on product development. In particular, we are very satisfied with the brilliant results achieved in the first eight months of 2015, showing a substantial increase in orders intake, as well as positive cash flow and EBIT performances, and validating the effectiveness of our strategy for growth through continuous product range innovation”, stated Ferretti Group’s CEO, Alberto Galassi.

More specifically, Ferretti Group’s consolidated orders intake as at 31 August 2015 totals € 253 million, showing a 105% increase over the first eight months of the year 2014.

As to the percentage breakdown of the total consolidated orders intake by geographical area as at 31 August 2015, Europe - Middle East - Africa accounts for 59%, Americas for 22% and Asia Pacific for 19%. Ferretti Group’s cash flow and EBIT figures as at 31 August 2015 also show positive performances as against the first eight months of the year 2014, further validating the effectiveness of the strategy implemented by the Group during the last year.

This new flybridge yacht plays a crucial role in the brand’s development strategy. The Ferretti Yachts 550, which features an unprecedented hull design, equipment and engine room arrangement and interior layout, is once again the brilliant outcome of the long-standing cooperation between the Group, its Engineering Department in particular, and Studio Zuccon International Project.

This yacht combines elegance and a very sporty character, with clear-cut and yet very seducing lines. The main deck uninterrupted glazing ‘cuts’ the yacht’s profile, increasing its dynamic look, while the three large glazed surfaces on the hull sides - the cabin windows - perfectly harmonize with the overall design and grant magnificent views from the interiors as well as plenty of natural light. The frameless fiberglass flush portholes result in very clean lines.

The lowered flybridge and the new forward lounge area on the wheelhouse offer incredibly wide outdoor relaxation areas, ensuring great privacy with no impact on the craft’s slender profile.

FERRETTI YACHTS 700
The new Ferretti Yachts 700 is the evolution of one of the greatest recent successes for Ferretti Group's historical brand. It features a slender, aggressive profile - one of the sportiest ones ever in the brand's history.

Hull restyling has involved in particular the large hull glazed surfaces – three per side –, which, preserving the family feeling with those found on the new 55-footer, are stanchion-free and with flush glued portholes.

The superstructure conveys a sense of sophisticated lightness: the dark long deck glazing, in the same color as the stanchions, 'cuts' across the yacht’s profile from stern to bow.

The glazing follows the lowering of the gunwale in the central part of the boat, where the living room can be found, thereby reflecting on the outside the main deck interior layout, while increasing the general sense of lightness that pervades the entire craft.

The lowering in the glazing also lets in plenty of natural light and offers guests and the crew alike the widest possible view on the surrounding landscape. The Ferretti Yachts 700’s aerodynamic design is most apparent in the elongated tail, surmounted by a roll bar housing
satellite systems and antennas and characterized by a new color shade, called 'Vulcan Grey'. Starting from the Ferretti Yachts 700, this warm grey shade will become the brand’s second color, and will be used on all accessory systems (roll bars, hard tops…), in contrast with the white shade of the hull and the superstructure.

The installation of all antennas in the roll bar will also make it possible to free up the aft area of the flybridge of any and all technical elements, thereby offering the Owner a panoramic terrace that can be furnished with free standing furniture.

RIVA 76’ PERSEO
Riva’s new coupé has been conceived with a view to preserving the family feeling with the other models in the brand’s sporty range, and deservedly joins the other true masterpieces in Riva’s recent production. This yacht immediately strikes for its sporty features and elegance, further enhanced by its color shades.

The first hull presents a new shade of metal silver - the already well-known ‘Moon Grey’ - as the dominating color, combined with Riva’s classical dark shade, ‘Bright Black’. The yacht’s sporty look is further highlighted by the over 40 square meters of glazed surfaces: the large hull glazing, on both sides, comprises two elliptical surfaces, ideally connected by the Riva logo, in polished stainless steel, one of the brand’s distinctive and traditional materials.

The side glazing on the main deck, in turn, is ideally ‘cut through’ by a handrail installed along the edge of the superstructure, which makes the yacht’s profile even more slender and extends the overall size of the glazing in the main salon, while ensuring the utmost safety along the outdoor passageways. The wide windshield, supported by a central stanchion, comes in the largest possible size, in order to offer the captain the widest and most thorough visibility. The spacious sun deck perfectly harmonizes with the yacht’s aerodynamic lines and ensures the utmost privacy and relaxation, besides allowing to pilot the craft from a privileged position.

88’ FLORIDA
An open yacht and a coupé: two souls, entwined in one single, spectacular yacht. Riva’s typically rigorous lines and the 88’ Florida’s own unparalleled elegance are made even more enticing by the yacht’s innovative ‘Convertible Top’ technology, derived from the automotive sector, creating the first convertible luxury motor yacht.

The new ‘Moon Grey’ shade, a light metallic grey that enhances the yacht’s slender lines, characterizes the slender lines of the first 88’ Florida, and is in pleasant contrast with the ‘Bright Black' shade details. The hull profile is really unmistakable thanks to the innovative-design continuous glazing featuring a stainless steel plate that bears the Riva logo in its central part. The large windshield and the steel roll bar complete this new yacht’s design.

88’ DOMINO SUPER
The 88’ Riva Domino Super immediately strikes the eye for its slender, streamlined profile, which is further highlighted by the color of the hull, a dark grey that has been named ‘London Grey’. The same innovative color shade can also be found in some deck details and harmoniously contrasts the light grey (‘Moon Grey’) of the superstructure.

Other important design solutions bear witness to the great value of this evolution: the new sundeck highlights the yacht’s sporty character, while offering guests additional comfort; the outdoor pilot station has been moved to the central part of the boat and has a very limited size, thereby making room for a large sofa at the bow; and the large uninterrupted hull glazing, featuring a very aggressive design, extends across the yacht, almost like an arrow, from the central part of the boat to the extreme bow.

The stainless steel plate bearing the Riva logo, just in the middle of the glazing, is the 'seal’ on this masterpiece and the restyled aft area adds the final touch to the yacht’s dynamic personality. The 88’ Riva Domino Super ’s outstanding technical equipment and solutions perfectly harmonize with its sporty look and offer additional comfort to all guests, making technical operations extremely easy.

CUSTOM LINE 108’
This new planing maxi yacht reaches the heights of excellence in yachting thanks to a skilful combination of distinctive features: a sporty spirit, a refined design, spacious volumes, cutting-edge technological solutions, and extremely refined interiors, tailor-made to the Owner's taste and requirements.

Characterized by stylish finishes and original contrasts, further highlighted by exclusive furniture and the greatest possible care for details, the Custom Line 108’ embodies a new concept of luxury, with a truly ‘noble’ touch. The Owners can thus not only experience the charm of ‘creating’ the yacht of their dreams: beyond that, they will own a Made-in-Italy jewel that is truly unique thanks to the solutions implemented onboard.

The Custom Line 108’ is also fitted with the patented Dual Mode Transom device and the innovative ‘VOTIS’ (Videoworks One Touch Infotainment System) infotainment system. Last but not least, to ensure unmatched comfort even when at anchor, the Custom Line 108’ will be equipped with
electro-hydraulic stabilizing fins with underway and zero speed functions. 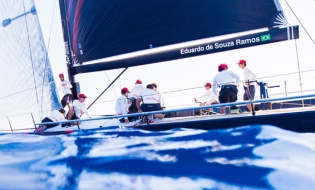 Onda: Flying the Flag and Looking to The Future

Knowing what they do about the intensity, and the extremely high level of competition within...