Australian Luke Parkinson has been recruited by Abu Dhabi Ocean Racing. The 23-year-old Perth sailor is joining the team skippered by Ian Walker in the Volvo Ocean Race 2014-15.

Parkinson will be one of Abu Dhabi's Under-30s crew members*. Turning 24 in February, this 49er sailor was selected by skipper Ian Walker after coming highly recommended within sailing circles and passing a series of testing trials.

"I sailed with Luke on this year's Hong Kong to Vietnam Race in very testing conditions," said Walker, Britain's twice Olympic silver medallist. "I was very impressed with his attitude and his skills as both a bowman and offshore helmsman. He is a multi-tasker which will be essential in the next race sailing the new Volvo Ocean 65 with only nine crew members in total, including the onboard reporter.

"Everything is going to be harder on deck. I have a very good feeling about Luke who I believe is hugely committed to producing his best for the team." For the young Aussie, who goes by the nick-name Parko and is qualified in sail making, first aid, sea survival and as a radio operator, this appointment is a "dream come true."

"This is quite simply the best Christmas present ever! I can't remember being this excited going into a new year," he said. "The Volvo Ocean Race is the challenge I want to work hardest towards. To me, doing the race is the biggest all-round challenge that provides the best sense of achievement and enjoyment. I just want to thank Abu Dhabi for giving me this chance – I will not let them down.

"For as long as I can remember I've had a passion for sailing. From racing as a young child, I decided to continue to base my lifestyle around trying to make the best go at it that I can. I love the different challenges sailing brings to people and I believe it brings out true personalities when life is at its toughest." And life will certainly be tough for the young, single Aussie as he tackles the 39,379 nautical miles race starting in October 2014 from Alicante, Spain.

Parkinson will start teaming up with Walker in December. The two will sail the Sydney-Hobart race with legendary Aussie sailor Syd Fischer on board his 100-foot Ragamuffin. The race starts on Boxing Day and Walker says it's not going to be a push over. "It will be a great experience for Luke and good offshore training for me too. It will is another excellent training exercise towards our long-term goals. We're in for a white knuckle ride but will give our best." Next up for Parkinson will be a February trip to Abu Dhabi – which will host the Volvo Ocean Race fleet over Christmas 2014 and New Year 2015 - to get to know his crew mates and the destination he'll now represent. He is looking forward to meet his fellow Under-30 Adil Khalid. In 2011-12, the 25-year-old Emirati became the only Arab sailor to complete the Volvo Ocean Race with Abu Dhabi.

"I've never been to Arabia before and I'm keen to learn more about it," said Parkinson. "I'm really looking forward to meeting Adil and swapping experiences. I've great admiration for him for setting role model standards for his fellow nationals – that's the only way to build a sailing following – showing what can be done, the benefits it brings not only for the individual but for the community." 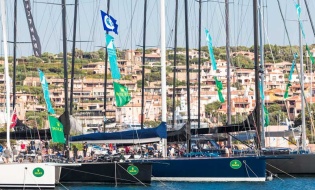 The great and good of Maxi yacht racing are gathered in Porto Cervo the spiritual...