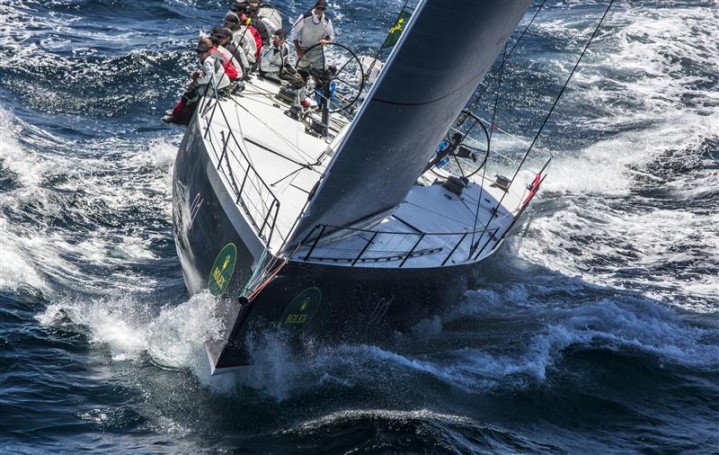 Twenty-four hours after the Rolex Sydney Hobart fleet raced out of Sydney Harbour the pace slowed up as the lead boats picked their way down the southeast coast of Australia.

By midday today (December 27) however, Wild Oats XI reeled in Loyal and took a slight lead. Just ten miles back was Syd Fischer, sailing in his 45th Sydney Hobart, this time on Ragamuffin 100, newly fitted out with water ballast and daggerboards – and as of this afternoon, leading IRC Division Zero on handicap.

The weather forecast will be the game changer for all of the fleet as they sail down the coast. Rachel McInerney, Duty Forecaster for the Bureau of Meteorology in Hobart reported earlier today, "Currently through Bass Strait there are light southwesterly winds, which will weaken as a ridge of high pressure west of Tasmania moves east. Winds will become light and variable overnight and then a north-northeasterly flow will develop through tomorrow morning; this will freshen the further down the east coast they go.

"Expecting northeast winds to become strong Saturday afternoon (Dec 28), 20-30 knots along lower east coast (15-25 upper east coast). A westerly change is expected Saturday evening which could cause some issues with winds turning around west-southwest, quite strong, up to gale-force along the south coast."

Approximately 80 nautical miles behind Wild Oats XI, is Matt Allen's Carkeek 60, Ichi Ban, currently leading IRC Division 1 on handicap. Will Oxley, navigator onboard, reported earlier, "We're just hanging on the coat tails of some of the big boats. Looks like a tricky day, and we are hoping to hold onto favourable northeast winds as long as possible. All is going to game plan, except for thunderstorms inshore last night, which slowed the fleet a bit."

Adrienne Cahalanis sailing in her 22nd race – but after eight years on the 100-foot Wild Oats XI, the accomplished offshore navigator is shifting gears and stepped onto a boat close to half the size: Bill Wild's 55-footer, Wedgetail.

This morning Cahalan emailed, "It was busy last night – lots of sail changes as we headed south through clouds coming from shore. We were in close contact all night with Ichi Ban, Varuna, Nikata, Victoire and Zefiro.

"The wind is so light out here now that if you did not position your boat last night for today, it is probably too late now. Having said that the fleet is close together today near us and appear to be following the same strategy, unlike last night when some boats when right inshore and some, like us, chose to stay further offshore. The wind won't fill in from the north until later today for us, so we are patiently waiting."

As of 4:00pm AEDT, the bulk of the fleet was between Eden and Uladulla, almost all boats east of the rhumbline, up to 70 nautical miles offshore.

As the frontrunners entered Bass Strait mid-afternoon today they were sailing in a light southwesterly making less than 10 knots of boat speed, in four knots of wind. With the race record for line honours no longer in threat, the ETA for the big boats at the finish off Hobart is more likely Saturday evening. Nonetheless, with 300+ nautical miles to the go, the battle is far from over. The lack of breeze is frustrating and challenging. Anthony Bell, skipper of Perpetual Loyal said, via Skype this afternoon, "Don't know if you want to be the frontrunner going into Tasman Island; as long as we stay in touch and stay within striking distance...we're staying positive, and the guys are working hard to keep the boat going."

Ninety-two boats are still racing, with two boats retired shortly after the start yesterday; Audi Sunshine Coast with damage to her rig, and Dodo with mainsail damage. 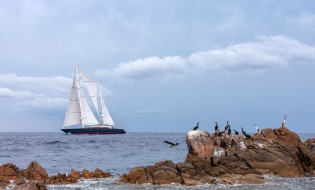