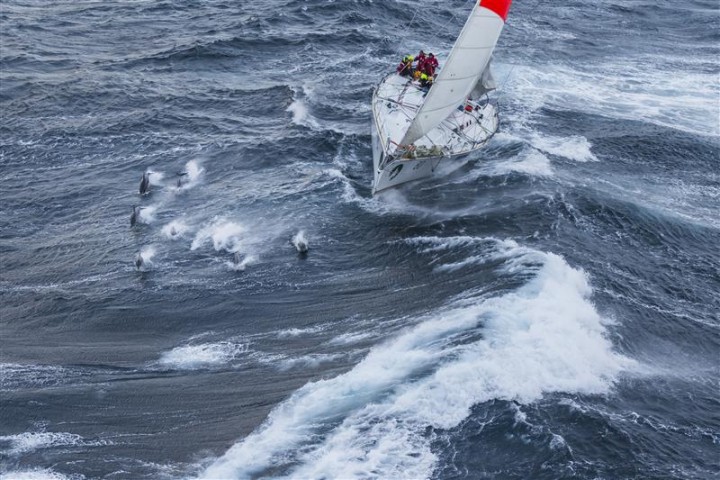 With all of the "big" boats in this year's Rolex Sydney Hobart Race safely dockside in Hobart by the early hours this morning (Dec 29), attention turned to the fleet still racing on Day 4 of the 628 nautical mile offshore classic.

As forecast, a low pressure system crossed through Tasmania yesterday evening (December 28) and brought with it southwesterly winds of excess in 40 knots and 4 – 5 meter seas.

The sharp change in weather conditions took its' toll in fairly short order, with five yachts retiring overnight, including the leading British Clipper 70 Henri Lloyd, which was east of Cape Barren Island when it lost its rudder bearing. Wedgetail was dismasted south of Tasman Island. The 55-footer, with veteran offshore navigator Adrienne Cahalan onboard, was considered a pre-race favourite.

The mid-coast section of the Tasmanian east coast proved treacherous for many in the fleet as most chose some protection closer to shore. But at Tasman Island, the fleet had to harden up into the southwesterly wind and massive seas.

The low pressure system had been forecast well in advance, which gave competitors time to plot the best route towards Hobart. American Hartwell Jordan, sailing on the German entry, Jens Kellinghausen's Varuna, said, "We knew we were going to have the big shift to the left. Basically what everyone was doing was jockeying for position so you're close enough to Tasman Island so you're not going to get slammed by the front, and you can cut the corner a bit on anyone that's outside you.

"The tradeoff off to being outside is more breeze, so you're running down the coast quicker – you'll get the big header, but then you're going to have to sail back in 45 knots of breeze."

Guillermo Attadil, Varuna's navigator added "As we arrived at Tasman Island last night, we saw the band of clouds and were looking at the barometer dropping down really quickly. It was really tough, the sea state was really bad and it was really gusty, so the wind went from 20 – 40 knots very quickly, and it was a bit messy the first few hours. 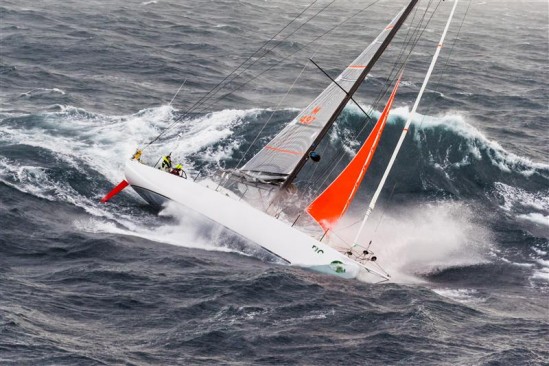 The Spanish sailor Attadil, a veteran of many offshore round the world and distance races (as well as America's Cup and Olympic Tornado and Star classes), remarked of the Rolex Sydney Hobart, "These kind of ('short' ocean) races are really tough because you don't go into a watch routine, you are on all the time and need all hands for manoeuvres. I think this is tougher than a VOR or long offshore race. It's like a sprint of 600 miles."

Tailing Varuna down the coast was Darryl Hodgkinson's, Victoire – a Cookson 50 that has finished second, twice in the race. The two yachts were closely matched, but Victoire finally legged ahead in the early hours (December 29) and led to the finish line, crossing just 30 minutes ahead of Varuna.

Victoire is currently standing as overall handicap leader. Hodgkinson described a bucolic start and first two days of racing, and said "We sailed across Bass Strait and we're looking at all of the stars, just glorious and thinking 'why hasn't it ever been like this before.' Then, in the building northeasterly yesterday (December 28), it was going fabulously, nothing was breaking and we're all holding on for dear life. The water is coming over the decks, and it's a thrill – we were going downwind in 25-30 knots.

"And of course, it all goes to hell when the southwesterly starts. Then the reality sets in, you get cold...you haven't eaten, the thrill turns into 'when is this going to end?!' But there is an amazing exhilaration in it and it's been one of those unique Hobarts we'll never forget!"

For now, Hodgkinson and his crew will have to wait until tomorrow for Roger Hickman's Farr 43, Wild Rose, the last yacht with a possible shot at beating them.

As of 4pm local time AEDT, there were 65 yachts still racing, 19 finishers, and 10 retired. 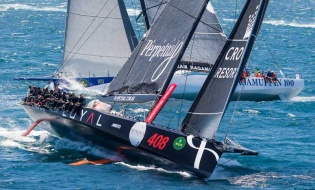 One of the sailing world’s blue ribbon races celebrates its 70th anniversary this year. From...