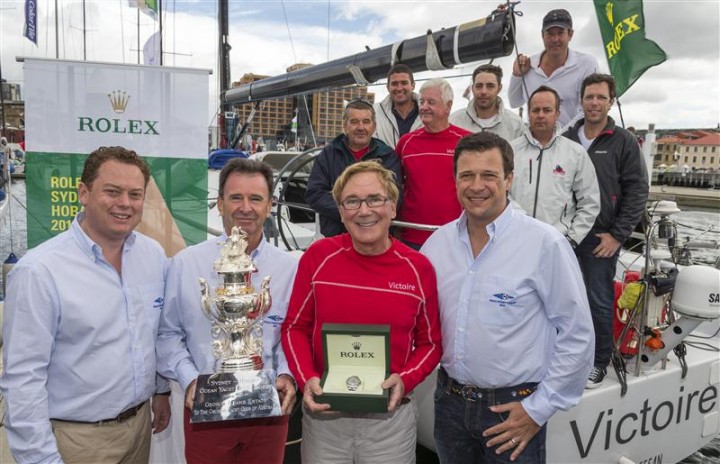 Day 5 and the remaining boats racing in the Rolex Sydney Hobart Race had a slight respite from prevailing weather conditions as the southwesterly moderated to 20 - 25 knots over night into this morning (December 30).

Unfortunately for Roger Hickman's Wild Rose, any chance of upsetting Victoire as overall handicap leader went by the boards with the diminishing breeze - at 4am AEDT when the boat needed to finish, it still had 35 miles to go. By mid-morning the Cruising Yacht Club of Australia could confirm that Darryl Hodgkinson's Cookson 50, Victoire was the official Overall Winner of the 69th edition of the Rolex Sydney Hobart Yacht Race. At a dockside presentation, Hodgkinson the owner/skipper, was presented with the Tattersall's Cup and a Rolex timepiece.

Hodgkinson, a plastic surgeon from Sydney, bought the boat as a birthday present to himself and told his wife his goal was a two-year plan to win the Rolex Sydney Hobart Race -- he fast tracked the timeline, succeeding on his first try. This was Hodgkinson's third go at the race, having competed in 2010 and 2011 on his Beneteau 45.

Elated with the win, Hodgkinson said, "This is the culmination of a great campaign, it's a personal victory and one I share with all sailors who did the race. I feel somewhat humbled to have won."

The exuberant skipper was quick to praise his mostly amateur crew and put the win down to meticulous planning and preparation. He praised tactician and strategist Sean Kirkjian – a 17-time race veteran – and said, "He's a wizard, who is just playing 'ocean chess' all the time". As well he touted Danny McConville, who has prepared two or three Hobart winners before, and said "This boat was in marvelous condition before we left the dock. We had a fair bit of preparation, I'd say."

Victoire's navigator, Phil Eadie confirmed the meticulous preparation and 'leaving no stone unturned' approach and said, "A lot of work has gone into this with Darryl. He had meetings every morning for months, making sure everything works.

Eadie has sailed in 34 editions of the race, and used that experience to draw from, "I plotted the tracks of a lot of the ones we've won before or other people have won before, just to sort of get a feel of it – that we didn't step too far outside of the paddock.

"There was a lot of preplanning, mostly in the last 24 hours before the start – we planned the whole race what we would do in theory, based on the weather, and had that laid out – and balanced that against reality. We have a really good weather guy, Chris Buckley from Perth, and he gave us a lot of good input." 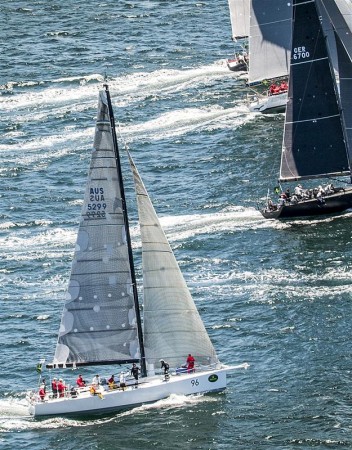 Hodgkinson recalled the key elements of Victoire's win, "It was a fairly tough race. When we got that heavy northeasterly, there were moments when we had to believe in ourselves, and our yacht. We knew this boat had won before, and so we let it run. We knew we were only going to win if we pressed really hard, and we couldn't let our foot off the pedal. And there were some moments when the foot was right down and it was like 'oh, this is a ride', and we were thrilled. Of course it was part terror! At one point, we had a Chinese gybe – which was pretty scary – but amazingly we got the boat up and going, and it worked out.

"But we changed our sail plan after that, and were quite surprised with the change from the A4 (headsail) to A6, how we could still maintain the speed. So I think we learned on the stick, as it were, on that one."

A steady stream of yachts crossed the line over the past 24 hours, and as of 6pm local time AEDT, there were 17 yachts still racing, 67 finishers, and 10 retired. The back marker was the 38-footer, Déjà Vu, which was expected at the finish early on the morning of January 1st. 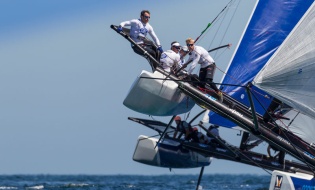