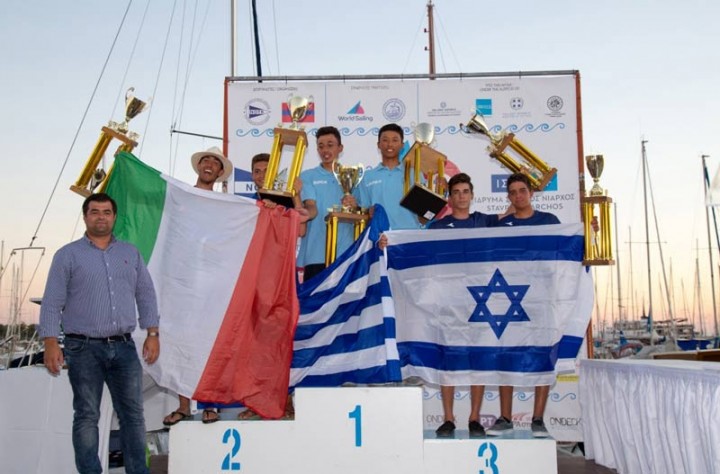 The final day of racing at the 2017 420 Open European Championships in Athens, Greece was nailbiting, as multiple teams chased down podium finishes in the Open, Ladies and U17 divisions.

Two concluding races for each of the Open, Ladies and U17 decided the podium line-up, with just the Open fleet swapping leaders in a tense day of racing.

The Closing Ceremony wrapped up with a huge crowd celebrating the achievements of the podium finishers, with prizes presented to the overall top three in the 420 Open, 420 Ladies, 420 U17 Men and 420 U17 Ladies fleets, and Championship gold, silver and bronze medals presented to the top three European teams in each.

Recognizing the team with the youngest combined age across the 179 boats competing, a 420 spinnaker was presented to Marina Kalakona/Marina Myrodia Triviza (GRE) who are each 13 years old and finished 41st in the under-17 fleet.

OPEN
It was a battle to the end between Greece's Telis Athanasopoulos Yogo/Dimitris Tassios (GRE) and Italy’s Edoardo Ferraro/Francesco Orlando for 420 Open European Championship gold.

Ferraro/Orlando held a narrow 3 point advantage going into today's final two races, but a 16th in race 11, compared to a win for the Greeks, saw the tables turned and the Italians launched their assault into the final race 12 on a 12 point deficit.

The Greek pair, who are the reigning U17 World Champions, opted to sail a safe race and kept a loose cover on the Italians. Although Ferraro/Orlando finished ahead, it was not enough to snatch back the gold, and they had to be content for silver, with Athanasopoulos Yogo/Tassios 6 points ahead with gold in the bag.

“We are very happy and I think we will enjoy this afternoon,” said a beaming Telis Athanasopoulos Yogo. “It was very tricky and the wind was very shifty, and in the last race we were sort of lucky as the wind shifted to the right direction for us and we managed to win overall.

“Of course, this is better than we expected,” he concluded.

Dimitris Tassios added, “I am very happy and now we are looking forward to the next Championship in Garda.”

Predicted a hugely motivated Athanasopoulos Yogo, “We aim to be on the podium again there and try to take a similar performance.”

Comparing the transition from winning the U17 420 Worlds last year to winning the Open Europeans, Tassios explained, “In this fleet, all the boats go much faster than the U17 fleet. We have learnt a lot about the speed of the boat and tactics racing here.”

Up next is the 420 Junior European Championships in Lake Garda, Italy, 6-13 August, where they will face many of the same names, and compete alongside the girls teams.

“Yes I think some girls are strong and good enough to compete with us, it will be a fun Championship,” wrapped up Athanasopoulos Yogo.

Silver was clearly a disappointment for Giacomo Ferrari/Francesco Orlando, but the pair are already looking ahead to the next opportunity to step up to the podium.

“This morning we went out with the gold bibs and after the last race I admitted we were a little bit sad," reflected Orlando. "But it is a second place at an Open European Championships, so it is a very good result. We are happy for that, but also a little bit sad. We have also the Junior European Championships in Lake Garda and the World Championships in Australia, and this is a good start, so we will do better at the next Championships. We learnt there are some little things that we must work on, but we will improve and continue to do our best."

Bronze to Israel's Tal Shariti Sade/Noam Homri, who knocked out a series which got better as each day passed.

“It is amazing, a great feeling,” said Homri. "Our approach to this Championship was all about focus and we were aiming for a top ten finish, so this is better than expected.”

A noteworthy 9th place finish for Thailand's Suthon Yampinid/Nopporn Booncherd who yesterday won race 10 and took out a 2nd place today. Another master from the Optimist Class, three years ago Yampinid won the Optimist Team Racing World Championships and finished 9th at the Optimist Worlds.

The seventy-seven teams in the 420 Open division raced a split series, with 6 qualification races before the top thirty-nine boats advanced to gold and the rest to silver. They may have preferred to make the cut to gold fleet, but winning the silver fleet is still an achievement to be applauded for Niamh Harper/Tom Wallwork (GBR).

“At the start of the week I didn’t realize how much big fleet racing I had missed out on and didn’t have the experience with,” said Harper on her takeaway from the Championship, although she did race the U17 Worlds last year. “So it’s more just sailing in an international fleet, what the fleet does and how easy it is just to lose places by doing nothing. Every mistake costs you.

“I really enjoy sailing as a mixed crew, although we are quite heavy for the 420, but still a lot lighter than some of the all-boy pairings. It doesn’t give us a disadvantage, you just have to be fit at the back of the boat!” 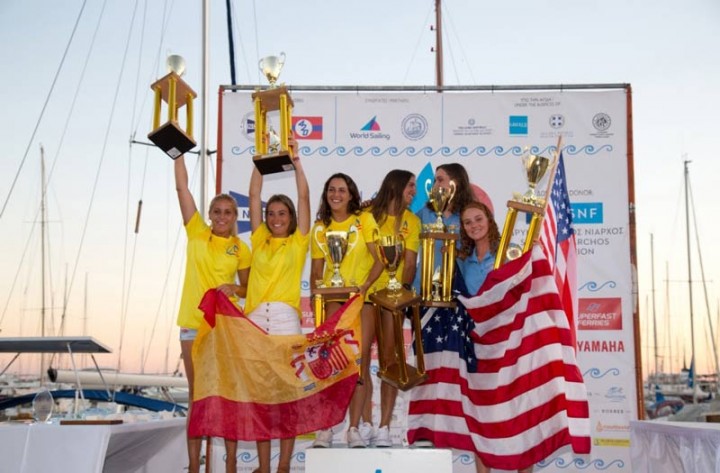 LADIES
With race 11 done, the two leading boats, Maria Caba/Pilar Caba (ESP) and Marta Garrido/Clara Llabrés (ESP), went into the final race separated by just 2 points, and a gap of 12 points to Emma Kaneti/Ciara Rodriguez-Horan (USA), who had hauled themselves back up from 4th and held a 13 points margin over the chasing French pair.

Neck and neck in race 11 and equally close in race 12 guaranteed a rollercoaster journey of emotions and control around the race track for the Spanish leaders. They stayed safe, put a boat between themselves and Garrido/Llabrés, finishing 3rdcompared to 5th, and won gold by 4 points.

“I cannot believe it,” laughed Maria Caba on securing gold. “This is so much better than we were expecting and today it was really difficult conditions, so for us it is amazing I cannot say anything else.

“I was really, really nervous today and it was a really difficult situation with the other Spanish so close, but in the end it all went ok.”

The USA’s Kaneti/ Rodriguez-Horan wrapped up their Championship with a sweeping return to form and results of 4,1, compared to yesterday’s UFD penalty and 24th which saw them plummet off the lead. Relief to clamber back, and convincingly finish third overall.

Rodriguez-Horan said, “Today was really, really hard. We had two different directions in each race, the first was out of the north and then did a complete 180 and came from the south in the second race. Other than that we were really focusing on starts. Once we were on top, it was easier to stay on top than fight back. It feels pretty good, I am happy about it.”

Kaneti commented, “Yesterday was a tough day as we couldn’t get off the line well and dropped because of it. We just wanted to sail clean today and get back on the podium, which we did and we are glad about.

“We are off the Junior Europeans where we will be sailing against the boys, so hopefully we will continue sailing fast and having good starts and everything will go well. I haven’t sailed in an international mixed fleet, and there are some really good sailors in the boys, and in heavier wind it might be a bit difficult.”

“We are a little unhappy because we lose a place because we did a difficult day, but we are very happy because we are third Europeans, so we are selected to represent France at the Youth Worlds in China later this year. It was very difficult for us, but it has been a good Championship and we are really excited to go to China.”

U17
Demetrio Sposato/Gabriele Centrone (ITA) wore the leader's yellow bibs since day one, and there was no reason for their rhythmn to come unstuck today. It almost did though as a 31st in race 11 saw the chasing Spanish pair of Martín Wizner/Pedro Ameneiro eat into their points advantage, which diminished to 10 points. Fortunately a 2nd in the final race put them firmly back on track and secured gold, and silver to theWizner/Ameneiro.

"We have done better than expected, as we came here to get some experience and to learn a lot. We also won so it’s great."

The USA’s Max Anker/Leyton Borcherding held onto the third place they started the day with, scoring a 20,5.

“It feels really good, to get bronze at our first international regatta,” smiled Anker. “I have enjoyed the week, we have had a bit of very different conditions. We prefer planning conditions, but we have dealt with the light stuff as well."

Commenting on the day’s game plan, Anker continued, “We just tried to stay consistent, sail our own race and let the others make mistakes. But our first race didn’t go too well, but we made up for it in the second race.”

All three podium teams will be heading to the 420 Junior Europeans, where they can do it all over again! 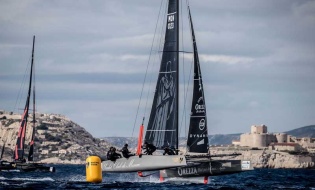