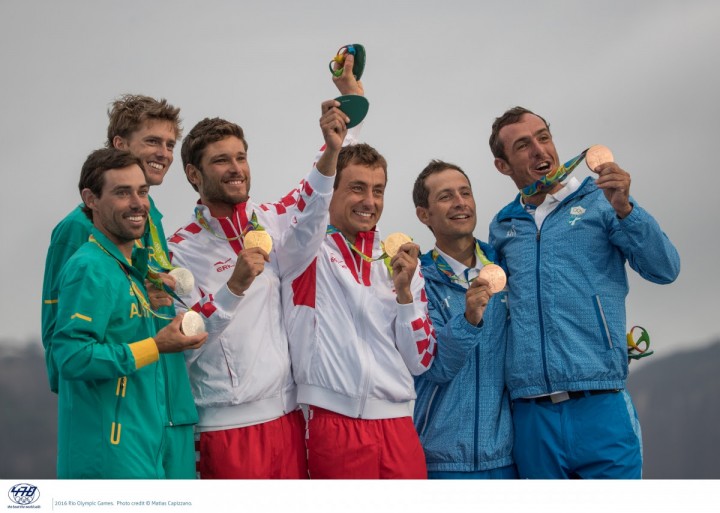 Epic medal races for the 470 Men and 470 Women brought to a climax six days of 470 Class racing at the Rio 2016 Olympic Sailing Competition.

Medal racing got underway in a frisky 17-21 knot breeze, featuring plenty of leaderboard moves as different teams took the edge, and a few near-disasters on the way.

Pao de Acucar, the medal race course, positioned close to Flamengo Beach and the 396-metre tall Sugarloaf Mountain is surrounded by a landscape which plays tricks on the wind. No lead is safe, no amount of leverage without risk. The unpredictability of the race track was evident in both 470 Women and Men races, with rollercoaster position changes for some.

Congratulations to all medallists and all 470 teams who competed at the Rio 2016 Olympic Sailing Competition.

With Hannah Mills/Saskia Clark (GBR) having already won the Women's 470 gold medal, the battle for silver and bronze came down to a six-way fight between New Zealand, USA, France, Japan, the Netherlands and Slovenia.

Racing in fantastic conditions of 20 knots, the 470 Women Medal Race got underway at 1305 hours. Knowing they had to avoid disqualification or race retirement to win gold, Mills/Clark sailed a safety first race, not getting involved in any start line positional jostling and sailing behind the fleet to move clear away from the line. Staying out of the pack was a tactic they continued employing for the whole race, and as they crossed the line and came ashore without incident the emotions started to pour.

Mills said, “We ran down the beach. I just wanted to see my mum. She’s been here the whole time supporting me, along with my family back at home. It is just such an amazing moment to be able to share with everyone. When you’re out on the water you’re doing it on your own and it was nice to be able to come in and see everyone."

Saskia said, “I can’t stop smiling. It’s been amazing winning a medal with one of my best mates and Joe (Glanfield), our coach is an absolute legend. We’re going to have some drinks with our friends, our families and the whole British Sailing Team who have been here the whole way, we wouldn’t be here without them, so it’ll be nice to have a few quiet drinks with the rest of the team.”

Annie Haeger/Briana Provancha (USA) took up the early running and led for the first two laps, putting them in silver medal position ahead of the 2012 Olympic Champions Jo Aleh/Polly Powrie (NZL). The shifting wind produced some new race leaders on the final lap, with Tina Mrak/Veronika Macarol (SLO) streaking away to win the Medal Race. Meanwhile the battleground for the medals was changing by the moment.

The Americans were given a penalty turn for fouling the Japanese crew which, combined with a big windshift on the final downwind leg, put them to the back and out of the medals. This left the way clear for New Zealand to take a jubilant silver medal with reigning World Champions Camille Lecointre/Hélène de France (FRA) making a late charge from the back of the fleet to finish sixth, sufficient to give France the bronze by a single point from the Netherlands crew, Afrodite Zegers/Anneloes van Veen (NED).

Aleh/Powrie now join an elite group of Kiwi sailors with two Olympic medals to their name.

“We’re really, really happy,” said Polly Powrie. “It’s been an incredibly tough week where we’ve had not much go our way, so to battle through with the support of Jo and Nathan and the wider team – it has been amazing.”

Talking about the race Aleh said, “It was really difficult, there was a lot of times in that race where I knew the other boats that were in there – there were three boats we had to look out for and they were all in positions that were a bit scary for us.”

“It was a hard race, there was a lot to keep track of and I’m just glad we could hold our composure to the end and see it out.”

It was tears of joy for the three Medal winning crews but the Americans were distraught after having controlled the race early on, only to come away with nothing.

Haegar/Provancha started Thursday’s final race strong. "We had a really good first beat, and then the racing got tricky, the fleet condensed, and it got pretty close," recounted Provancha on the beach afterward. But the American pair were unable to stay out in front on the tactically unpredictable medal race course.

"The wind was up and down coming off Sugarloaf and the fleet split on the second upwind leg," said Provancha. "We had to pick a side, and we went left. Unfortunately when the fleet converged again it was all one tight-knit group. On the last run, we sailed out of the pressure, fouled a boat, and had to spin." Haeger/Provancha executed their penalty turns, and dropped to 10th place at the finish.

“Obviously we're disappointed that we didn't perform today, but we really gave this regatta our all. The ending doesn't take away from how awesome the whole team has been, and our coach Dave Ullman. We fought hard, and it's just not our time right now," concluded Provancha.

The top three teams in the 470 Men would all medal, but the color still needed to be decided. 2016 World Champions Sime Fantela/Igor Marenic (CRO) had the edge with an 11 point lead, and never let Panagiotis Mantis/Pavlos Kagialis (GRE) and Mat Belcher/Will Ryan (AUS) out of their sight.

Fantela/Marenic controlled the Australians and Greeks, finishing the medal race in 8th place to win Croatia's first ever gold medal in Olympic sailing. The Croatians sailed a controlled race, making sure they stayed ahead of their rivals Australia and Greece.

“It feels great, it feels like we have completed the circuit,” said Fantela. “We have European title, World title and now the Olympic title. It is something we have dreamed about since we were kids, since we started Optimists, since we moved together to 470, this is a dream that has been a long time in our heads. And after the three Olympic Games, we are finally here and finally on top of the podium, it feels amazing.”

“We became good friends in the Optimist, we sailed together in four World Championships and then at the age of 15 when we had to step out of the Optimist, we had a silly idea to try 470,” commented Marenic in reference to transitioning straight to the 470 Class.

“Our parents are also crazy enough to support us and I had to move from the island of Cres to Zadar. I moved into his house. I lived with a new pair of brothers and sisters, and new parents, Sime’s parents and I just have two beautiful families. Yeh and the rest is history. We are the best mates,” Marenic smiled.

“We hope this will put a spotlight on our sport in Croatia. I hope to bring more attention to sailing as a sport and to the country and government to invest more in sailing,” added Fantela. “What we can expect home in the next days, in our home towns, I think will be a good party for us. They have been with us since all our years, through all our difficult situations and good situations. I have been talking to some friends at home and they have the same passion as we have and I can feel they want the medal as we do. So I believe it will be a good party back home.”

With the Croatians in control of gold, Belcher/ Ryan were more concerned about protecting the silver medal and engaged Mantis/Kagialis in a match race before the start.

As the race got underway, the Swiss team streaked off into the lead, leaving the three medal contenders covering each other's moves at the back of the fleet. As the Aussies and Greeks became caught up in their own duel, Croatia's job of defending gold was a bit more straightforward. Belcher/Ryan controlled the Greeks, locking down their every turn as Mantis/Kagialis tried to wriggle free in a simple battle of whoever finished ahead would take the silver medal. Belcher/Ryan mostly had the best of Mantis/Kagialis until the top of the final windward leg when Ryan lost his footing and briefly fell overboard.

“I just slipped and fell straight in,” said Ryan of the incident approaching the third mark. “Fortunately Matt pulled me back out of the water one-handed pretty quickly and got me back into the boat and back into the race.”

The Greeks seized the moment and moved into the lead, but the Australians attacked again on the final run to the finish. They pressured the Greek boat into making a small mistake on a gybe, and the 2012 Olympic Champion steered the Aussie boat for the finish, crossing the line just six seconds before their rivals to secure silver for Australia.

“We had two goals,” explained Belcher. “To try to win the race if we had the opportunity or to control the Greek boat. It didn’t really matter where we finished – we just had to be in front of Greece.

“It was quite entertaining at the back. When it became clear Croatia was in front (of us) we changed our strategy out on the water. We came here to win but to take silver was great,” said Belcher. “We fought in good Aussie spirit and we can hold our heads high.”

Ryan added, “It’s hard to be disappointed with silver but the hunger is still there for more.”

Despite being overhauled by the Australians, the Greek team were very happy with bronze after a tough series at Rio 2016. Mantis/Kagialis missed out on selection to London 2012, so walking away with a bronze medal at their first Olympics is a dream come true.

Fantela/Marenić, who are from Zadar and the island of Cres in Croatia respectively, were competing in Rio at their third Olympic games. In 2008 the pair finished 9th, whilst in 2012 in London they finished in 6th place. Their victory crowns a stunning week for Croatia, the 470 Men's gold going alongside Tonci Stipanovic's Laser Men's silver just two days ago. Croatia had never won an Olympic medal in sailing, now it has two. 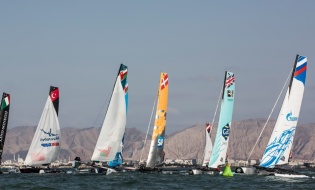 Sultanate of Oman to host first Act of the…

The Extreme Sailing Series™ starts a landmark season in 2016 with a Middle Eastern flavour...