Abu Dhabi Ocean Racing surged to a commanding victory in the Iberdrola In-Port Race in Alicante, taking maximum points from the first competitive action in the Volvo Ocean Race 2011-12 to gain an early advantage over their rivals.

“It’s a great win -- I feel fantastic. I said before we left the dock that whoever wins today’s race can go home with a spring in their step and look forward to the week ahead.” The crew, led by British skipper and double Olympic silver medallist Ian Walker, roared home to a massive 14-minute win over their closest rivals to make it a dream debut for the first team from the United Arab Emirates to enter the race.

PUMA Ocean Racing powered by BERG were second, ahead of CAMPER with Emirates Team New Zealand in third. Team Sanya edged Groupama sailing team in the battle for fourth and fifth, with Team Telefónica trailing home.

“It’s a great win -- I feel fantastic,” said Walker on board Azzam, the team's strikingly designed racing yacht. “It’s a great start for Abu Dhabi Ocean Racing. I don’t think it means too much but I said before we left the dock that whoever wins today’s race can go home with a spring in their step and look forward to the week ahead.”

The in-port race marked the start of the epic 39,000 nautical mile round the world race, tipped to be the most hotly contested edition in the event´s 38-year history. And after opening their account with a crucial win, Abu Dhabi Ocean Racing will go into the first offshore leg with a maximum six points and a psychological advantage.

In-port races take place in all 10 Host Ports around the world, testing the crews’ skills at close-quarters manoeuvres and tactics. More than 20 per cent of all points are up for grabs in the in-port racing, which could prove vital when overall positions are decided. The races also provide a show for the millions of people who will watch the race worldwide.

Strong winds and pelting rain greeted the teams as they left the dock in Alicante, Spain, but by the time the start gun fired at 1400 local time (1200 UTC-GMT) the weather cleared with a 10-15-knot breeze blowing down the race course and the state-of-the-art Volvo Open 70s blasting along Alicante’s coast around the short inshore course.

An incredibly close start saw Abu Dhabi, CAMPER and Groupama lined up and equally matched, each looking for the slight advantage over their rivals. After weak starts, Telefónica and Sanya were left playing catch up.

As the yachts approached the first mark it was PUMA´s Mar Mostro with the inside track but sailing’s ‘rules of the road’ meant Ken Read’s team had to give way to Ian Walker’s crew and the United Arab Emirates’ first ever entry in the Volvo Ocean Race took the lead.

Slick crew work from Walker’s team saw them extend their lead during lap two. A nightmare rounding at the second mark saw CAMPER slip from second to fifth, a perfect example of how one mistake can cost dearly.

A dwindling breeze in Alicante Bay confounded the situation on the water as the teams struggled to keep their boats moving. The instability of the breeze led to the race committee shortening the course, and with a substantial lead over their opponents, victory was secured for Abu Dhabi Ocean Racing.

With the race’s first ever Emirati, 22-year-old Adil Khalid, waving the flag of the United Arab Emirates, Abu Dhabi Ocean Racing’s yacht Azzam crossed the line to claim the first points of the Volvo Ocean Race 2011-12.

Walker said a slick sail change at the second mark was the key moment. “We had practised it in training and we pulled it off,” he said. “It was a credit to everyone.”

In the final sprint to the line, Iker Martinez's Team Telefonica were looking good for fourth place - but close call with Mike Sanderson's Team Sanya ended in a penalty and last place for the Spaniards while Sanya jumped into fourth.

"I think the jury was not in the right place because the jury gave us a penalty,’’ Martinez said. “I think we could have finished fourth without the penalty.’’

However Sanderson, who won the Volvo Ocean Race in 2005-06 with ABN AMRO ONE, said it was a "fair move".

“I had them lined up pretty early on to be honest, I’m sure they’re a little upset with us but I was very comfortable that we had them locked," he said.

“They were a bit stuck though I guess. It’s a shame for them, but you know, we need to take them any way we can and I feel it was a fair move.”

The six teams now have one week to make the final tweaks to their yachts before they set off from Alicante bound for Cape Town, South Africa, the first of nine offshore legs. Leg one starts at 1300 UTC (1400 local time) on November 5 and is expected to take around 21 days to complete.

* Immediately on finishing, Groupama informed the race committee they were making a protest over the CAMPER forestay design. The jury rejected the protest. 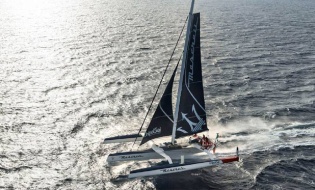 A new challenge for Giovanni Soldini and the Maserati…

From Hong Kong to London, retracing the 13.000 miles of the Tea Route