World Sailing Management (WSM), organizers of the MedCup sailing circuit, the official international competition of the TP52 and Soto 40 classes, regrets to announce to all those involved and interested in this prestigious circuit, that it has decided to suspend the 2012 season.

This difficult business decision was taken for the following reasons, all of them related to the economic and financial crisis affecting the whole world and Europe in particular:
Serious uncertainty regarding the number of boats, mainly in the 52 Series (TP 52 class), willing to commit to compete in all of the events comprising the circuit with the risk of an insufficient number of competitors to ensure the competitive level reached by the circuit in previous seasons.
The lack of financial resources available to local authorities in their bid to become potential venues for the events of the circuit, which limited the ability to address their usual obligations and maintain the circuit's level of quality.
Together with the abovementioned factors, a decrease in the support needed from AUDI AG, which has been the circuit's title sponsor, has led WSM to terminate, early and peacefully, the sponsorship deal linking both companies.
In brief, WSM believes that it is more rational to suspend the Circuit than let it continue with falling standards.

Nevertheless, WSM will continue to work during 2012 in order to overcome these difficulties, confident that it will be able once again to provide the sailing world with the spectacle that the MedCup Circuit has always been.
audimedcup.org 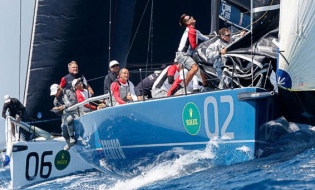