The race begins in Alicante, Spain where the warm waters of the Mediterranean lap the town’s historic shores. Alicante’s Race Village will open from October 14 to November 5, with more than a million visitors expected.

There will also be a full concert programme in the Race Village starting on October 14 through to November 5th, for the full line up visit: 20 concerts in 20 days. Vast sandy beaches and remote coves, smart hotels or typical Spanish villas and plenty of fashionable places to eat, the region of Valencia, and in particular, the port of Alicante, has it all. Go exploring and you will find charming villages with enough culture and tradition to keep even the most enthusiastic historian entranced. Not surprisingly, it is a region that now hosts almost 24 million visitors each year.

There are well over 100 km of beautiful beaches stretching from Castellón in the north to Benidorm and the Costa Blanca in the south. There are beaches for everyone and Alicante itself has seven: from the noisy and festive with large stretches of fine sand, to quiet and still stony coves with crystal clear water.

Along with the history, the chance to see castles and climb mountains, the beaches are the main draw for millions who flock to the region in search of sun and sea. The regional government – the Generalitat – is proudly keeping everything in the best condition possible. So there are sunshades and deckchairs, toilets and changing areas, as well as signs, ramps and access for people with reduced mobility. There are no showers on the beach, though, not here. Instead, environmentally friendly footbaths are the norm, using treated seawater. Over 100 beaches on the Valencian coast have been awarded the blue flag, recognition from the European Union over quality of water and sand as well as the services offered.

And the beaches are not just for sunbathing and swimming. Through its Department of Tourism, Culture and Sport, the Generalitat has set aside separate areas for basketball, volleyball and even football.

In the heart of the region, lies the city of Alicante. It has an exceptional climate that is characterised by mild winters and hot summers, with an average annual temperature of over 18 degrees Celsius and around 3,000 hours of sunshine per year.

In Alicante, the Mediterranean is ever present, helping infuse the city with light. Its seafront, stretching between El Postiguet beach and the western quay, from where you can enjoy a view of the marina, is a must at any time of the year. Also along the seafront, and next to the Plaza del Mar fountain, there is one of the city’s finest buildings: the Casa Carbonell, built between 1922 and 1925 by the architect Juan Vidal Ramos. The new raised promenade, that runs parallel to the sea along the eastern quay, is a fantastic place from which to watch the Alicante In-Port Race and the start of leg one of the Volvo Ocean Race.

The Explanada is one of the nicest promenades in Alicante. It is lined with four rows of palm trees and its floor is paved with 6.6 million tricolour marble tiles forming a wave effect mosaic. Other local parks and squares include Canalejas Park, at the end of the Explanada, with spectacular lush vegetation including several hundred-year old rubber plants, the romantic Gabriel Miró square, and La Ereta Park, built on the slopes of Mount Benacantil and overlooking the bay and El Palmeral, on the outskirts of the city.

From 14 October to 5 November 2011, the city of Alicante will again become the world’s sailing capital.

In 2008 Alicante first hosted the start of the world-renowned Volvo Ocean Race. The start was an unprecedented success, both for the media and for the sport itself. It was frequently referred to as one of the best starts in the history of the competition, and the city of Alicante was confirmed as start port for next three races. The city of Alicante is also the home of the race and the race office is situated in the heart of the Puerto de Alicante.

Leg 1 takes the fleet on 6,500 nautical mile race from Alicante to Cape Town. 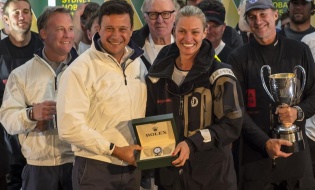