A whole host of Olympic heroes and World Champions will fight it out in the Nacra 17 at the inaugural ISAF Sailing World Cup Final in Abu Dhabi, United Arab Emirates from 26-30 November 2014.

The 17-boat Nacra 17 fleet features an abundance of Olympians with no less than 18 appearances stemming from Atlanta 1996 within the 17-boat fleet of 34 sailors.

Sofia Bekatorou and Konstantinos Trigonis (GRE) are one of the most experienced and versatile partnerships within the fleet. Between the pair they have two Olympic medals, seven Olympic appearances and 11 World Championship medals.

With their senior sailing careers commencing in the mid-1990s their thirst for elite competition is as high as ever and Bekatorou is looking forward to quenching it in Abu Dhabi, "I expect a high level competition, a well-organized event with lots of sailing adrenaline," said the Athens 2004 Olympic gold medallist Bekatorou, "I want to race against the top sailors of our fleet and meet them bow to bow over and over again. The rest of the World Cup events haven't given me this opportunity yet and since we are a new team we will definitely benefit from such an experience.

"It is a great opportunity to experience similar parameters with the Olympic Games performance factors. I am really looking forward to it."

The fleet is sparkling full of sailors with numerous accolades and Bekatorou is not shocked to see such a high calibre fleet competing in Abu Dhabi, "It does not surprise me that the Sailing World Cup Final attracts a number of well decorated sailors.

This is the meaning of such an event, to attract the elite athletes and provide a great sailing event so it's attractive for the media and the spectators.

"I expect that the Sailing World Cup Final will become, by the years, a pinnacle event like in other sports." 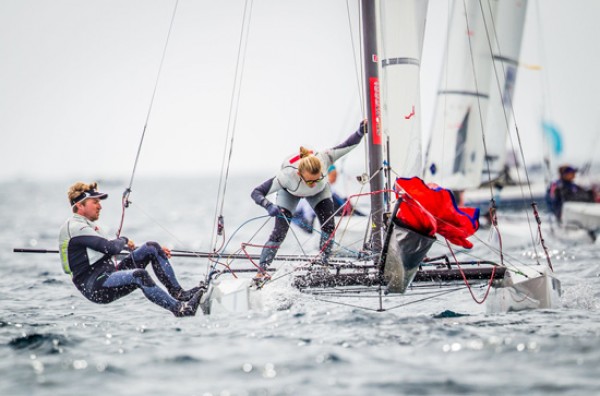 The Nacra 17 is unique in that it attracts a number of sailors who have been able to transfer their skillsets in other sailing disciplines into the multihull. One partnership that has done exactly that is Canada's Luke Ramsay and Nikola Girke.

Ramsay, 2006 Laser ISAF Youth Worlds Champion, competed at London 2012 in the Men's 470 whilst Girke sailed the 470 at Athens 2004 before switching to the Women's RS:X for Beijing 2008 and London 2012. Having forged a strong relationship within the Canadian Sailing Team they decided to team up to race the mixed multihull in 2012 and have been preparing hard for the Emirates adventure, "We've had two training camps in Miami and have been preparing anything extra that we might need for the event.

We've been doing some researching about what the conditions will be like, both on and off the water and have been diligent with our dry land fitness training.

"We are really excited to get back on the race course because it has been a long time since our last event and we have trained a lot on our own or with just one boat. Adding a top level event in the fall is exactly what we wanted in our program, it should not only be very fun, but a good test to see where we stack up against the best."

The Canadians have had mixed results since teaming up with two top seven finishes at the 2013 and 2014 ISAF Sailing World Cup Miami their highlight.

However they are born athletes who know when to peak and how to perform as Girke added, "As a team we are improving on the things we have been working on these past few months, most of them process goals. The Sailing World Cup Final concept is something that excites us and it will be a really exciting event.

The competition will be fierce, not only because all the top sailors are there but also great that there is a prize purse for the winners. 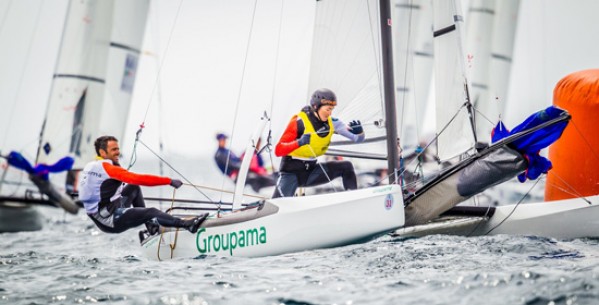 "However, walking away as 'World Cup Final Champions' would be the ultimate performance goal."

With a 17-boat fleet in Abu Dhabi it allows to sailors to test themselves against their rivals in an Olympic sized fleet and for Thomas Zajac and Tanja Frank (AUT) it's an added bonus alongside competing at the ISAF Sailing World Cup Final, "It's very exciting, especially because the fleet will be the size of the Olympics.

Apart from the test event in Rio we have never had this small size with so many good sailors in it. I like the idea to race in this kind of fleet, it's good fun and it's a big challenge."

A challenge it will be with 2013 and 2014 Nacra 17 World Champions Billy Besson and Marie Riou (FRA) coming in as red hot favourites having continually dominated the class over the last 18 months.

Add in the likes of Volvo Ocean Race winner and offshore superstar Franck Cammas with Sophie de Turckheim (FRA), World #1 Vittorio Bissaro and Silvia Sicouri (ITA) and the experienced veteran Mitch Booth (NED) it will make for an intriguing competition come 14:00 on 27 November. 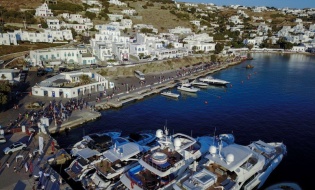